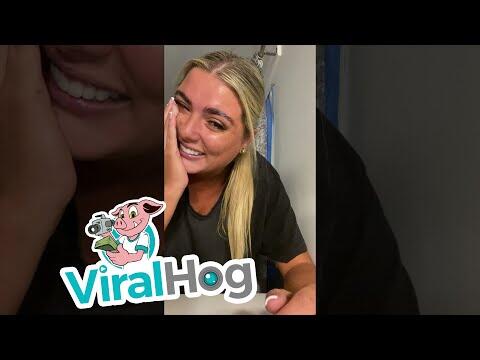 I gotta say, being a parent can be a rewarding, and brutally difficult, job sometimes.

And when I say brutally difficult, a part of it is includes their kid buying absolutely ridiculous things for no apparent reason.

I remember my friend’s older brother went online one time when he was eight-years-old, and had the bright idea to buy 1,000 orange golf tees using his dad’s credit card, simply because his favorite color was orange.

I can’t remember what the exact price was, but it was a lot of useless money, and his dad was irate.

However, a video has gone viral of a British woman playing a prank on her dad, telling him she bought $150 worth of “premium air” for the tires in her car. She also mentioned that her dad owns a car showroom so it’s safe to assume he knows a thing or two about “premium air.”

And even if she was talking about nitrogen (she’s not), $150 bucks would be pretty steep. Costco does it for free (at least they used to, they might not anymore).

Needless to say, the father’s reaction was absolutely priceless.

Here’s how the convo went down:

He then proceeds to hang up, and was probably punching air in the car at the same time.

Turning the tables on the classic dad “Blinker Fluid” prank.

The post Dad Loses His Mind After Daughter Tells Him She Paid $150 For Premium Air In Her Tires first appeared on Whiskey Riff .

that is the sound of a man who has worked hard for every penny he has made.

It's so sad that we cannot edit our words on any of these apps I sure hope you all fixed these problems because most of us speak into our phone that is with corrections but the corrections never work. I hope you all read my story and realize the mistakes came by the phone that their corrections do not work.

The 5-year-old threatened to cut ties unless he stopped talking about her on his radio show. Jeff Lewis opened up about an upsetting conversation he had with his 5-year-old daughter Monroe Christine after her apparent rejection to various private schools. During an episode of "Jeff Lewis Live" on Monday, the...
RELATIONSHIPS・12 DAYS AGO
SheKnows

Cardi B Says Her Infant Son Has Already Hit This Milestone: 'I Don't Know If This Is Normal'

When it comes to raising kids, Cardi B always keeps it real, frequently sharing with fans the adorable and hilarious highs and lows of being a mom of two. In a series of early morning videos shared to her Instagram Stories Wednesday, the rapper revealed that her four-month-old son is already hitting some seriously impressive developmental milestones — he’s apparently already quite chatty with his mom and dad. “This baby is talking,” Cardi shared of her son whom she welcomed with husband Offset back in September (the couple have not publicly revealed their son’s name). “I put this on everything I...
BEAUTY & FASHION・11 DAYS AGO
Indy100

A woman has revealed she had to tell her husband she won’t wash his dirty underwear anymore because he keeps leaving “skid marks”. The unfortunate woman made the revelation in a post on Mumsnet and said that despite being an “amazing man” her husband’s hygiene habits were getting on her nerves.
RELATIONSHIP ADVICE・1 DAY AGO
Shine My Crown

'LHHNY's Mama Jones Trends After Son, Jim Jones, Says She Taught Him How to Kiss: 'She Showed Me With Her Mouth'

Mama Jones is trending online after her son, Jim Jones, revealed that she taught him how to french kiss. During an episode of Angela Yee's Lip Service podcast, Jones said that his mother demonstrated how to tongue-kiss on him when he was just a boy.
RELATIONSHIPS・10 DAYS AGO

A BRIDE-TO-BE has found herself in a very awkward situation just weeks before her big day, after her two brothers refused to come if their stepdad is there. The woman, 25, and her brothers, 30, went through a difficult time when their parents divorced, and when their mum remarried, the brothers didn't want anything to do with her husband.
RELATIONSHIP ADVICE・1 DAY AGO
InspireMore

‘I’ve been looking for you my whole life, and now I get TWO dads for the price of one!’: Man discovers daughter after DNA test, ‘She is so incredibly beautiful’

Get more stories like this in your inbox! Sign up for Smile, our free daily good news email read by over 825K people!. “On April 7th, a few weeks after quarantine started, I received a message on Facebook from a young woman named Alexandra Lovett. We had no friends in common. I typically delete these messages and friend requests, but this time, I didn’t. Turns out she was notifying me that through her Ancestry DNA test, we had a Parent/Child match!!! She told me, ‘I am your daughter and I have been looking for you my whole life!!!’
RELATIONSHIP ADVICE・2 DAYS AGO
GTNationEd

Emily Clarkson, Jeremy Clarkson’s eldest daughter, has responded to being told to “get a real job” that isn’t “connected to Instagram” after a recent post to her Instagram account revealed that she was worried about the security of her income if her account was taken down.
INTERNET・13 DAYS AGO
KGUN 9

The products and services mentioned below were selected independent of sales and advertising. However, Simplemost may receive a small commission from the purchase of any products or services through an affiliate link to the retailer's website. Breaking up is hard to do. And that’s more than just the title of...
RELATIONSHIP ADVICE・9 DAYS AGO

Mom Drops 100 Lbs. After Daughter Teaches Her to Count Macros: 'She Knows What She's Talking About!'

Bridget Shinn was a chronic fad dieter. "I had been up and down my entire life," says the 61-year-old from Conway, Arkansas. "If it was a Monday, I was on a new diet." The legal assistant had also had two failed weight loss surgeries, including gastric sleeve. "I didn't learn anything," Shinn tells PEOPLE for the Half Their Size issue. "Weight loss surgery doesn't fix your brain. It fixes your body — and that is not enough."
DIETS・13 DAYS AGO
HollywoodLife

Bob Saget’s Daughter Aubrey Reveals Last Text She Got From Dad Before His Death: ‘Love U’

Aubrey Saget, the oldest child of late actor Bob Saget, received a loving text message from her dad just hours before he was found dead in a Florida hotel room on Jan. 9. Bob Saget’s family is devastated in the aftermath of the actor’s death on Jan. 9. “We are devastated to confirm that our beloved Bob passed away today,” the family said in a statement. “He was everything to us and we want you to know how much he loved his fans, performing live and bringing people from all walks of life together with laughter. Though we ask for privacy at this time, we invite you to join us in remembering the love and laughter that Bob brought to the world.”
CELEBRITIES・6 DAYS AGO
Slate

Help! My Ex-Wife Changed Her Name to Be the Exact Same as My Fiancée’s.

Our advice columnists have heard it all over the years. Each Sunday, we dive into the Dear Prudie archives and share a selection of classic letters with our readers. Join Slate Plus for even more advice columns—your first month is only $1. Dear Prudence,. After we divorced, my ex-wife...
RELATIONSHIP ADVICE・14 HOURS AGO
Newsweek

The husband was branded "controlling, disrespectful and entitled" by one Redditor. "He is putting your health and safety on a back burner."
RELATIONSHIP ADVICE・6 DAYS AGO
Daily Mail

A father-of-ten has tragically died after a gruelling battle with Covid-19 and pneumonia. John Talo tested positive to coronavirus in November, but his condition became life-threatening about a month later when his inflamed lungs filled with fluid - which quickly became infected. His wife Ellen, daughter, nine sons, two grandchildren,...
RELATIONSHIPS・2 DAYS AGO
HollywoodLife

After feeling ‘gross discomfort’ over her heritage growing up, Mady says she is now ‘proud’ of being Korean-American. Mady Gosselin is all grown up and she has the maturity to prove it! The 20-year-old daughter of exes Jon and Kate Gosselin opened up about embracing her Korean heritage as an adult after feeling “shame” about it during childhood. In honor of Korean-American Day on January 13, Maddy took to her Instagram to share a throwback photo, revealing how the first time she got an American Girl doll caused her “discomfort” over her own ethnicity.
FAMILY RELATIONSHIPS・2 DAYS AGO
Newsweek

The video sparked a fierce debate over the best—and worst—ways to co-parent during the pandemic.
BEHIND VIRAL VIDEOS・2 DAYS AGO
Newsweek

The TikTok footage of a sweet-looking kitten lashing out has prompted comparisons to a car not being able to start.
ANIMALS・2 DAYS AGO
HOLAUSA

A lot is going on in the world right now. From Tristan Thompson admitting he is the father of Maralee Nichols’ son, to the Omicron varient, the headlines are wild. But no one was ready when a resurfaced clip of Elmo from Sesame Street losing his cool in 2004 went viral. It all started on January 3rd when Twitter user @wumbooty shared the clip on Twitter with the words, “there are tears in my eyes y’all my stomach hurting.” In the unhinged clip, Elmo goes off on his best friend Zoe at the thought of sharing a cookie with her pet rock Rocco. The video has been viewed 5.7 million at the time of this publication and Elmo has since responded to the messy situation.
PETS・11 DAYS AGO
InspireMore

‘She’s just my stepmom.’ I wasn’t on the daycare list. I’m left off emails because I’m not a ‘primary’ parent.’: Woman navigates blended family life, ‘I’m more than JUST a stepmom’

Get more stories like this in your inbox! Sign up for Smile, our free daily good news email read by over 825K people!. “As a child, I was raised by my mother and an amazing extended family. My biological father didn’t believe I was his and therefore didn’t want to be a part of my life. My mom did an amazing job, but I always felt like a part of me was missing. At 5 years old, I was fatherless and unbeknownst to me, had developed abandonment issues. That was until my mom married my stepdad with kids from a previous marriage and all was made right, or so I thought.
FAMILY RELATIONSHIPS・4 DAYS AGO
Indy100

Wife fuming after husband returns from massage parlour with an STI

A woman has claimed her husband returned home from a massage parlour having contracted an STI. Speaking to Canadian publication Richmond News the anonymous woman said she believed the parlour - which the publication did not name for legal reasons - may offer sexual services as well as traditional massages and while her husband didn’t pass his infection to her she had made him sleep on the floor just in case.
RELATIONSHIPS・1 DAY AGO
Insider

The 46-year-old talk-show host shares two daughters, Olive and Frankie, with her ex-husband Will Kopelman.
RELATIONSHIPS・2 DAYS AGO