Find out what's happening in Visalia and Tulare County. The Visalia Times-Delta is your source for local news, crime, entertainment, sports, feature stories and opinion.

Evolutions Fitness and Wellness Center will remain a Tulare gym and community hub after the hospital board — which owns the building — rejected a proposal to transform part of the gym into a veteran’s clinic.

It's the second denial this fall.

The decision followed a heated public meeting in which dozens of Tulareans pleaded with hospital board members to reject a consultant’s plan to retrofit the building into a Department of Veterans Affairs clinic.

"The gym is not just a gym; Evolutions is a health facility that joins with the community, with the hospital, with all of the other health needs that we have here," said Sally Boucher, a Tulare resident who uses the gym for physical therapy. "I want everything good for the vets ... but [the VA] shouldn't have to remove the gym to make it happen."

Under the proposal, part of the building on Prosperity Avenue would have remained a gym though its footprint inside would have shrunk. It’s unclear to what degree since the hospital board opted not to move forward with Catalyst Capital to draw up plans to submit to the VA.

Board President Kevin Northcraft called the VA’s fixation on the Tulare gym “foolish,” adding that he believed a veteran's clinic would benefit the community but that the Evolutions location was inappropriate. A Catalyst representative told the board that the VA was only interested in existing property within Tulare and Visalia, and that other property owners were not interested in leasing their buildings to the federal government for the clinic.

Trustee Xavier Avila argued that there was no harm in allowing the consultant to draw up a floor plan to get a better idea of how the VA and Evolutions may coexist within the building. He added that Evolutions has been a financial drain on the district since it was forced to close — along with most other gyms — during the coronavirus pandemic.

Evolutions managers countered and said that since reopening they have paid their rent and have contributed millions of dollars to the district in the 15 years that the gym has operated at the building. Former board members neglected to invest the rent money into necessary repairs and building improvements, however, leaving the district with a massive, looming maintenance bill to repair the gym’s pool, HVAC, and other amenities.

While the district is in sound financial standing — and recently received a clean bill of health from auditors — Avila said the district had a fiduciary obligation to pursue the VA proposal which could have brought up to $375,000 to the district, according to Catalyst.

Some Tulare residents agreed, saying that they were open to the possibility of the VA and the gym sharing space.

Ultimately, the board nixed the proposal in a 3-1 vote with Avila as the sole supporter of the veteran's clinic. 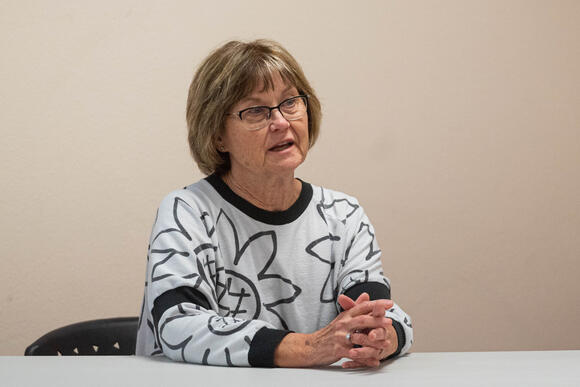 The board appointed Marmie Fidler, a local gravestone maker, for the job after interviewing several candidates.

The board addressed potential conflict of interest accusations head-on. Fidler's business holds an exclusive contract with the Tulare Public Cemetery District, of which Avila is a member.

Avila advocated for Fidler, assuring the public that he would not exercise undue influence over the appointee and that her decisions would be her own. Northcraft said the action was vetted and approved by the board’s attorneys.

Avila simultaneously sitting on both the hospital and cemetery board has been the subject of scrutiny in the past, with Visalia-based attorney Maggie Melo calling the dual role improper. She petitioned Avila to step down from one of the boards in a written notice earlier this year.

Fidler thanked the board for its support, adding that she was looking forward to serving the district.

The board now has a final vacancy to fill after District 1 trustee Phil Smith resigned to become the district’s chief executive, a position he formally accepted last week.

Those interested in the seat can submit a letter of interest to the district. Applicants must live in District 1 which covers the southern edge of Tulare, Tipton and Pixley.

Joshua Yeager is a reporter with the Visalia Times-Delta and a Report for America corps member. He covers Tulare County news deserts with a focus on the environment and local governments.

A bridge collapsed in Pittsburgh shortly before President Biden was set to travel there to tout his infrastructure law. No one was killed. CBS Pittsburgh's Ken Rice has the latest.
PITTSBURGH, PA・8 HOURS AGO
The Associated Press

WASHINGTON (AP) — The House committee investigating the U.S. Capitol insurrection subpoenaed more than a dozen individuals Friday who it says falsely tried to declare Donald Trump the winner of the 2020 election in seven swing states. The panel is demanding information and testimony from 14 people who it...
PRESIDENTIAL ELECTION・9 HOURS AGO
The Associated Press

WASHINGTON (AP) — Russian President Vladimir Putin appears to be preparing to launch an invasion of Ukraine, with more than 100,000 troops positioned around the country. Certainly, the U.S. believes that’s the case and President Joe Biden has warned Ukrainian President Volodymyr Zelenskyy that an attack could come in February.
POLITICS・2 HOURS AGO
CNN

(CNN) — A Pennsylvania appellate court on Friday struck down a law that allows no-excuse absentee voting, saying it violates the state constitution. The law, known as Act 77, was enacted in late 2019 with strong bipartisan support. But in September, more than a dozen Republicans in the state House -- most of whom voted for the law -- filed suit, asserting that the changes made to absentee voting were unconstitutional and should have been pursued through a constitutional amendment placed before voters.
PENNSYLVANIA STATE・12 HOURS AGO

The AR-15-style rifle that Kyle Rittenhouse used in the shooting of three men during a 2020 protest in Kenosha, Wisconsin, will be destroyed.
KENOSHA, WI・9 HOURS AGO
CBS News

South Carolina federal judge Michelle Childs is under consideration to succeed retiring Justice Stephen Breyer on the U.S. Supreme Court, the White House confirmed late Friday. Childs, 55, is based in Columbia, South Carolina, and was nominated last year by President Biden to serve on the U.S. Court of Appeals...
COLUMBIA, SC・6 HOURS AGO
The Associated Press

NEW YORK (AP) — Joni Mitchell said Friday she is seeking to remove all of her music from Spotify in solidarity with Neil Young, who ignited a protest against the streaming service for airing a podcast that featured a figure who has spread misinformation about the coronavirus. Mitchell, who...
MUSIC・3 HOURS AGO
The Associated Press

How a Russian invasion of Ukraine would reverberate around the world

London (CNN) — The prospect of an imminent Russian invasion of Ukraine has heightened alarm in the region, threatening to plunge the country's 44 million inhabitants further into the grips of conflict. But a move by the Kremlin would also ripple far beyond the two nations' shared border. Experts...
POLITICS・3 HOURS AGO
newsnationnow.com

(NewsNation Now) — Two Houston police officers were released from the hospital Friday following a police chase that ended in a shootout and an hourslong standoff with a barricaded suspect. The situation began about 2:40 p.m. on Thursday as officers responded to a family disturbance call at a home...
HOUSTON, TX・7 HOURS AGO

Find out what's happening in Visalia and Tulare County. The Visalia Times-Delta is your source for local news, crime, entertainment, sports, feature stories and opinion.