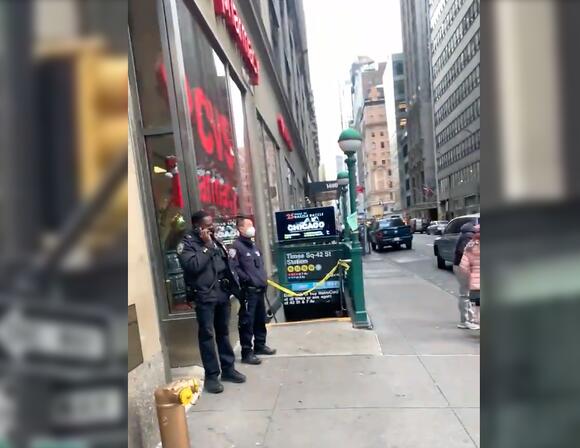 The victim was taken to NYC Health + Hospitals/Bellevue and is in stable condition, cops said.

The New York Post reports the victim and his alleged attacker are homeless and got into a dispute before she allegedly slashed him in the chin.

Sources told the Post the woman is described as 5 feet and 3 inches tall and was seen wearing a gray hat and gray pants.

Police were reportedly canvassing the area for the suspect.

Cops said the suspect made homophobic and hateful remarks regarding the person’s country of origin before punching them multiple times and taking out a knife.
BRONX, NY・14 HOURS AGO
1010WINS

The NYPD released surveillance footage on Tuesday of a knife-wielding man who is wanted in connection to an assault that occurred last month in Harlem.
NEW YORK CITY, NY・20 HOURS AGO
1010WINS

Video released by the NYPD on Wednesday shows the victim being shoved to the sidewalk at E. 86th Street and Henderson Place around 12:30 a.m. on Dec. 25.
NEW YORK CITY, NY・2 HOURS AGO
1010WINS

The NYPD confirmed the officer was shot in the leg near Lorillard Place and Third Avenue in the borough’s Belmont neighborhood Tuesday evening.
BRONX, NY・2 HOURS AGO

One person was killed and eight others were injured, including five NYPD officers, in a massive fire and building collapse sparked by an explosion in the Bronx Tuesday morning.
BRONX, NY・14 HOURS AGO
1010WINS

Cardi B to pay funeral, burial costs for Bronx fire victims: 'I cannot begin to imagine the pain'

The rapper is teaming up with the Mayor’s Fund to Advance New York City to support the victims’ families and make sure their wishes are met, TMZ reported Wednesday.
BRONX, NY・45 MINUTES AGO
1010WINS

An off-duty NYPD officer was arrested after he allegedly punched a drunk driver repeatedly and hurled racist insults at him during a confrontation in Brooklyn over the weekend, police said Monday.
BROOKLYN, NY・1 DAY AGO

Police launched an investigation after a group of suspects beat and robbed a 24-year-old man at gunpoint inside a Manhattan subway station early Monday, authorities said.
NEW YORK CITY, NY・2 DAYS AGO
1010WINS

The body of a man believed to be homeless was found aboard a subway train in Brooklyn on Monday morning, according to authorities.
BROOKLYN, NY・1 DAY AGO
1010WINS

Officials are searching for a man accused of breaking into a Bronx Burger King earlier this month, according to the NYPD.
BRONX, NY・2 DAYS AGO
1010WINS

The NYPD sergeant who fatally shot a woman having a mental health crisis in 2016 faced an internal trial on Tuesday where a departmental prosecutor said he should be fired for his role in the incident.
NEW YORK CITY, NY・16 HOURS AGO

The NYPD is searching for a man who is sought in connection with a robbery that occurred at a TJ Maxx in Brooklyn last month, authorities said.
NEW YORK CITY, NY・2 DAYS AGO
1010WINS

A school bus driver has been arrested and charged after a 15-year-old girl was fatally struck in a hit-and-run collision in Brooklyn Monday morning, according to police.
BROOKLYN, NY・1 DAY AGO
1010WINS

A man who escaped police custody from a Brooklyn hospital is back behind bars and facing new charges, police said late Saturday.
BROOKLYN, NY・2 DAYS AGO
1010WINS

Upon arrival, cops made contact with the 24-year-old man on the third floor, which resulted in the police-involved shooting.
YONKERS, NY・1 DAY AGO
1010WINS

The first reported shooting happened Friday just before 10 p.m. at the Lillian Wald Houses on the Lower East Side, located at 691 FDR Drive.
NEW YORK CITY, NY・3 DAYS AGO
1010WINS

Police said inside the home, they found a semi-auto handgun and a loaded revolver. Also found was a large amount of marijuana, MDMA and cash.
HEMPSTEAD, NY・12 HOURS AGO
1010WINS

Yonkers Police are asking people to avoid an area of Main Street as officials investigate a police-involved shooting.
YONKERS, NY・1 DAY AGO
1010WINS

Cops said when the responded to the scene, they saw the “obviously deceased” Richardson II in a grassy area near Black Horse Pike in Egg Harbor Township
EGG HARBOR TOWNSHIP, NJ・16 HOURS AGO