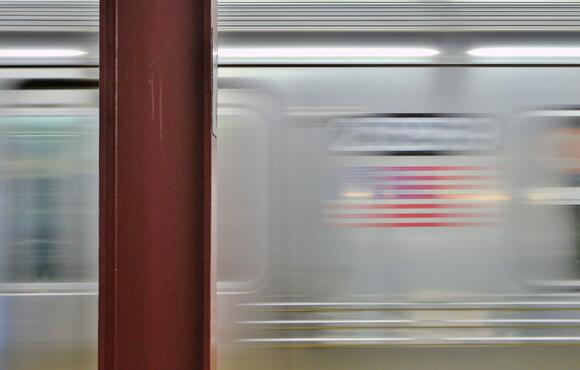 NEW YORK (1010 WINS) — A teenager who allegedly punched an MTA conductor in the face after he was asked to stop smoking on a subway train was arrested Monday afternoon.

NYPD officials said the incident happened in East Harlem at the 103rd Street station around 12:30 p.m. when a conductor on a southbound 6 train asked the 17-year-old to stop smoking marijuana inside the train.

Police said the teenager became enraged and attacked the MTA worker, punching him in the face and causing a laceration to the man’s left eye.

The conductor, whose name was not released, was transported to Mount Sinai Hospital in stable condition, according to police.

The 17-year-old, whose identity was also not released, was arrested at the scene and charged with felony assault.

is anyone surprised? you can do anything you want these days and not go to jail

aren't these Democrat reared kids grand? They have no shame, no morals, and no sympathy for others

The NYPD is looking to identify a knife-wielding man sought in connection to a slashing that happened during a fight on a Bronx street over the weekend, authorities said.
BRONX, NY・4 HOURS AGO
1010WINS

The body of a man believed to be homeless was found aboard a subway train in Brooklyn on Monday morning, according to authorities.
BROOKLYN, NY・3 HOURS AGO
1010WINS

A school bus driver has been arrested and charged after a 15-year-old girl was fatally struck in a hit-and-run collision in Brooklyn Monday morning, according to police.
BROOKLYN, NY・15 HOURS AGO
1010WINS

An off-duty NYPD officer was arrested after he allegedly punched a drunk driver repeatedly and hurled racist insults at him during a confrontation in Brooklyn over the weekend, police said Monday.
BROOKLYN, NY・1 HOUR AGO

The NYPD released video footage of a man they said posed as a food delivery worker and fatally shot a man on the Lower East Side last week, according to authorities.
NEW YORK CITY, NY・23 HOURS AGO
1010WINS

Officials are searching for a man accused of breaking into a Bronx Burger King earlier this month, according to the NYPD.
BRONX, NY・1 DAY AGO
1010WINS

Police launched an investigation after a group of suspects beat and robbed a 24-year-old man at gunpoint inside a Manhattan subway station early Monday, authorities said.
NEW YORK CITY, NY・1 DAY AGO
1010WINS

Officials discovered the decomposed body of an 84-year-old inside his Brooklyn home over the weekend, police confirmed Monday.
NEW YORK CITY, NY・21 HOURS AGO

A man who escaped police custody from a Brooklyn hospital is back behind bars and facing new charges, police said late Saturday.
BROOKLYN, NY・1 DAY AGO
1010WINS

A 4-year-old girl died days after she sustained critical injuries from a car crash on Long Island that also led to the arrest of her mother, who was allegedly driving while on drugs at the time, New York State Police said Monday.
RIVERHEAD, NY・18 HOURS AGO
1010WINS

Yonkers Police are asking people to avoid an area of Main Street as officials investigate a police-involved shooting.
YONKERS, NY・15 HOURS AGO
1010WINS

An off-duty correction officer was arrested in Brooklyn Thursday afternoon after allegedly punching a woman during a verbal dispute in front of her home.
NEW YORK CITY, NY・3 DAYS AGO
1010WINS

The shooting happened Friday at around 3 p.m. at 3440 White Plains Road in Olinville. Police said one person fired the shots, but his target was unclear.
NEW YORK CITY, NY・3 DAYS AGO
1010WINS

The NYPD is searching for a man who is sought in connection with a robbery that occurred at a TJ Maxx in Brooklyn last month, authorities said.
NEW YORK CITY, NY・1 DAY AGO
1010WINS

Police have charged a homeless man after he allegedly pushed a 40-year-old Asian woman to her death in front of a subway train in Times Square on Saturday morning.
NEW YORK CITY, NY・2 DAYS AGO
1010WINS

Police are searching for a woman accused of violently assaulting an employee at a Bronx dry cleaner earlier this month, authorities said.
BRONX, NY・4 DAYS AGO
1010WINS

The first reported shooting happened Friday just before 10 p.m. at the Lillian Wald Houses on the Lower East Side, located at 691 FDR Drive.
NEW YORK CITY, NY・2 DAYS AGO
1010WINS

The number of carjackings in New York City exploded from 2018 to last year, surging 355% in the three-year span, according to new NYPD statistics.
NEW YORK CITY, NY・3 DAYS AGO
1010WINS

Police said it all happened around 8:30 a.m. on East 41st Street and Fifth Avenue in Midtown, when the 59-year-old victim approached Xavier Israel, 25, of Ohio, as he lied on the ground.
NEW YORK CITY, NY・4 DAYS AGO