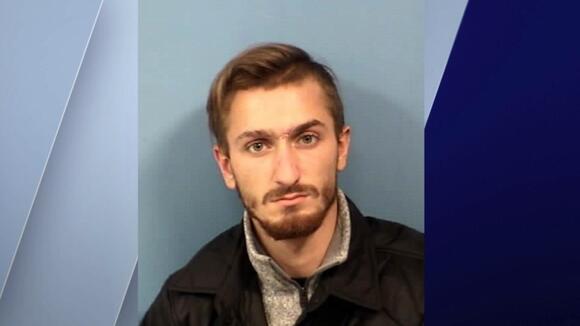 DUPAGE COUNTY, Ill. — A 22-year-old Naperville man was allegedly drunk and going over 120 miles per hour before he crashed into a car last month, killing three people.

In the early morning hours of Oct. 30, Lisle police responded to a multiple-vehicle crash at the intersection of Warrenville Road and Navistar Drive. At the scene, officers observed two vehicles, one of which was cut in half.

Andrew Purtill, 46, the driver of the first vehicle, was pronounced dead at the scene. Graciela Leonos, 21, and Geovanny Alvarez, 22, died as a result of their injuries.

Brendan Wydajewski, 22, the driver of the second vehicle, was hospitalized following the crash.

Wydajewski’s BAC was .147 when taken at the hospital, police said. He allegedly was driving 122 MPH at the time of the crash.

He was released from the hospital on Sunday and is facing charges of aggravated DUI resulting in death and unlawful possession of a firearm. Wydajewski’s bond was set at $500,000.

His next court appearance is scheduled for Jan. 11.

Simple: Lock him up for life in the smallest jail cell available. Period. May you rot in hell. Inexcusable to drink that much and drive. Ever heard of Uber or Lyft, you alcoholics? Nobody completely understands this unless they've had a loved one that has died from a drunk driver. Trust me. Absolutely infuriating.

HE should've been THE ONLY one KILLED.

CHICAGO — An 11-year-old boy was charged in connection with a Mount Greenwood carjacking. Chicago police said the child was arrested by the Vehicular Hijacking Task Force Wednesday after being identified as one of the offenders who took a car at gunpoint from two women. Police said he took the car from the women, ages […]
CHICAGO, IL・1 DAY AGO
WGN News

CHICAGO — Two people were killed following a shooting and subsequent crash Thursday night in Ravenswood. At around 5:05 p.m., police responded to the 1500 block of West Wilson on the report of a shooting. Following a preliminary investigation, police believe two males were driving when unknown suspects in a white truck fired shots. The […]
CHICAGO, IL・1 DAY AGO
WGN News

FOREST VIEW, Ill. — Police are asking for the public’s help in finding a 20-year-old woman missing from Forest View since Sunday. Charisma Ehresman was last seen leaving her home on the 4600 block of S. Wisconsin around 10:15 a.m. on Jan. 23. Family says Ehresman has missed work and school and has had no contact with them. […]
FOREST VIEW, IL・19 HOURS AGO
WGN News

NAPERVILLE, Ill. — Police in Naperville said they will never consider suburban professor Matthew Lange’s slaying five years ago a “cold case” as they continue to hope for tips through a $45,000 reward. Lange, 37, of Oswego, was waiting to pick up his 4-year-old son outside Scullen Middle School on the night of Jan. 27, […]
NAPERVILLE, IL・1 DAY AGO

No officers were struck.
CHICAGO, IL・1 DAY AGO
WGN News

ANTIOCH, Ill.  — Police in the northwest suburbs continue to search for a man who has been missing since he walked away from a car accident last Saturday. Tommy Howe, 24, from Antioch, was last seen around 11 a.m. on Jan. 22, near Interstate-94 and Route 176. Antioch Police Chief Geoff Guttschow says Howe was […]
ANTIOCH, IL・2 DAYS AGO
WGN News

CHICAGO — As the troubling trend of expressway shootings continues to confound law enforcement and the public, experts are trying to better understand how and why these high-speed shootings occur. This week, the Illinois State Police unveiled the most comprehensive plan yet, funding new technology aimed at deterring the shootings and catching the perpetrators. The […]
11 HOURS AGO

No officers were injured, though one was taken to Rush University Medical Center with shortness of breath.
CHICAGO, IL・1 DAY AGO
WGN News

Man shot by police in Loop among 3 suspects in custody

Officers saw the man crouched behind a vehicle, gave him some commands, then heard a single gunshot and found the man dead of an apparent self-inflicted gunshot wound, authorities said.
MILWAUKEE, WI・2 DAYS AGO
WGN News

MILWAUKEE (AP) — Police say four people have been detained as police investigate their level of involvement, if any, in the deaths of six people who were found with gunshot wounds in a Milwaukee duplex last weekend. Chief Jeffrey Norman said at a news conference that investigators believe multiple suspects targeted the six people. No […]
MILWAUKEE, WI・1 DAY AGO

MILWAUKEE — Police are searching for the person who shot a Milwaukee County deputy. The shooting happened during a traffic stop early Wednesday morning near Adler and 68th streets. A passenger jumped out of the vehicle and ran away. While chasing the suspect, the deputy was shot multiple times, according to Milwaukee officials. The deputy […]
MILWAUKEE, WI・2 DAYS AGO
WGN News

A criminal investigation has officially been opened into the death of a 23-year-old Connecticut Black woman who died while on a date with a man she met on a popular dating app.
BRIDGEPORT, CT・2 DAYS AGO
WGN TV

SOUTHFIELD, Mich. (AP) — A teenager charged with killing four students at a Michigan high school will pursue an insanity defense, his lawyers said in a notice filed Thursday as he, his parents and school officials faced a new lawsuit over the attack at Oxford High School. The notice,...
OAKLAND COUNTY, MI・1 DAY AGO
WGN TV

Jussie Smollett to be sentenced March 10 for lying to police

CHICAGO (AP) — Jussie Smollett, who was convicted last month for lying to police about a racist, homophobic attack that authorities said he staged, will return to court for sentencing March 10, a judge said Thursday. Cook County Judge James Linn set the sentencing date in Chicago for the...
CHICAGO, IL・1 DAY AGO
WGN News

A suspect led Houston police on a chase Thursday that ended with him wounding three officers in a shootout, stealing a car and barricading himself inside a home for hours before surrendering, authorities said.
HOUSTON, TX・18 HOURS AGO
WGN News

CHICAGO — A man was struck and killed by a CTA Blue Line train in Wicker Park. Police said the accident happened around 4:50 a.m. Wednesday at the Division Street station in the 1200 block of North Milwaukee Avenue. The man was pronounced dead at the scene, according to police. His identity has not yet […]
CHICAGO, IL・2 DAYS AGO
WGN TV

LAS VEGAS (KLAS) — Two people were arrested by Arizona authorities after they found 130 pounds of methamphetamine during a traffic stop, according to the Arizona Department of Public Safety said. A DPS trooper initiated a traffic stop on the driver of a Chevrolet sedan on eastbound Interstate 40...
FLAGSTAFF, AZ・2 DAYS AGO
WGN News

CHICAGO — A student at North Park University missing since last week was found dead, according to Chicago police. Coman Fevrier, 21, was last seen at the university’s Hanson Hall, 225 West Foster Ave., around 2:30 p.m. Friday. He texted his sister the following day around 5:45 p.m. and that was the last time he […]
CHICAGO, IL・2 DAYS AGO