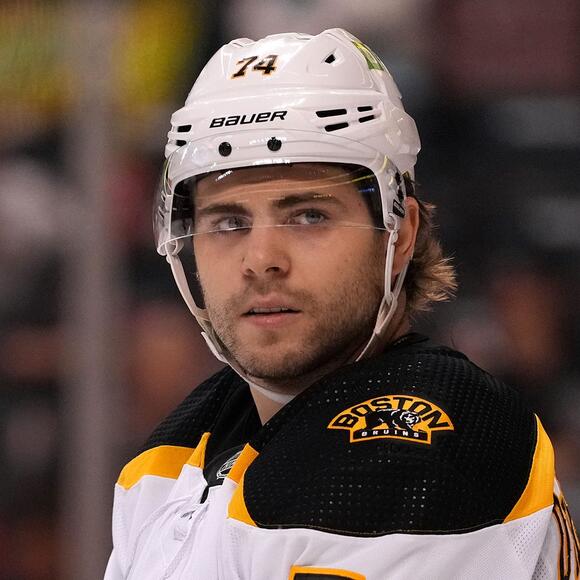 It appears things have finally reached a breaking point between the Bruins and Jake DeBrusk.

After coach Bruce Cassidy made DeBrusk a healthy scratch for Sunday night's win over the Canucks, reports emerged Monday afternoon that DeBrusk has requested a trade and that the Bruins are working to accommodate the request.

DeBrusk has three goals and three assists in 17 games this season. His play had dropped off a bit in recent weeks after a promising preseason and first few games.

The Bruins had hoped that an offseason reset would lead to a bounce-back season for DeBrusk after a disappointing 2020-21, when he had 14 points in 41 games and was healthy scratched three times, including in the second round of the playoffs.

Whatever optimism there had been has obviously vanished, at least in the eyes of Cassidy and his staff. Resorting to a healthy scratch to send a message again this early in the season was a clear sign that there is still significant disconnect between coach and player.

In explaining why he was scratching DeBrusk over the weekend, Cassidy cited a "drop-off" in other areas of DeBrusk's game in addition to his offensive production.

"I think what happens with Jake and what we’ve seen over the last few years is that when the production is there, you get more second effort. They kind of go hand-in-hand. When it’s not there, we lose a little bit of that," Cassidy said. "That’s been the ask of him for a number of years here, to have no drop-off on this side of this ledger just because the production isn’t there. … You still need the other things, second effort away from the puck, working to keep it out of your net, etc."

It's unclear as of Monday evening if DeBrusk will continue to play while the Bruins work towards a trade, but the Bruins could probably use him this week in particular with the news that fellow left wing Brad Marchand has been suspended three games.

Now that the 2021-22 season is about half of the way through, and Covid is ravaging many clubs, it’s time
NHL・2 DAYS AGO
Sportsnaut

Brad Marchand injured by Garnet Hathaway's hit from behind

The Bruins have played enough good hockey over the first two weeks of 2022 to reasonably believe what happened on Tuesday night at the Garden was an aberration. After the feel-good event of Willie O’Ree’s number retirement ceremony, the B’s killed the vibe by playing a simply awful first period against the Carolina Hurricanes en route to a well-earned 7-1 beating.
NHL・2 DAYS AGO

Bruins Come From Behind to Tame Mustangs

A third period comeback catapulted the Estevan Bruins to their third straight win as they knocked off the Melfort Mustangs 4-3 Wednesday night at the Northern Lights Palace. The seesaw affair saw the Bruins take an early 2-0 lead only to give up three unanswered goals to Melfort before rallying to score twice in the third period.
NHL・1 DAY AGO
bostonhockeynow.com

NHL Trade Rumors: Could Bruins And Habs Be Trade Partners?

Could the Boston Bruins make their first trade with the Montreal Canadiens since they acquired defenseman Eric Weinrich straight up from the Habs for defenseman Patrick Traverse on February 21, 2001?. All indications are that once new Montreal Canadiens general manager Kent Hughes and Canadiens executive vice president of hockey...
NHL・14 HOURS AGO
The Hockey News

Is There a Market for Jake DeBrusk?

Jake DeBrusk requested a trade on Nov. 29 but remains a regular forward with the Boston Bruins. With the March 21 trade deadline still two months away, one wonders if the 25-year-old winger will be skating with a new club before then. DeBrusk hasn't spoken to the media about his...
NHL・2 DAYS AGO
USA TODAY

3 takeaways from the Bruins’ lopsided loss to the Hurricanes

"I think you have to burn the tape on that one." Five first-period goals from the Carolina Hurricanes sank the Boston Bruins, 7-1, for their first loss in five games on Tuesday at TD Garden. “Tonight, we had nothing,” head coach Bruce Cassidy said. “They were clearly better than us...
NHL・1 DAY AGO
WFAN Sports Radio

If you’re looking for fantasy hockey tips for the games ahead, you have come to the right place. As the
NHL・2 DAYS AGO
CharlotteObserver.com

Despite a slew of COVID-19 postponements, the interruptions have hardly stopped Auston Matthews’ ability to score goals — especially in
NHL・2 DAYS AGO
KREX

The Boston Bruins retired Willie O’Ree’s number 22 before Tuesday night’s game against the Carolina Hurricanes. O’Ree was the first Black player in the NHL, breaking the color barrier in 1958.
NHL・2 DAYS AGO
San Diego Union-Tribune