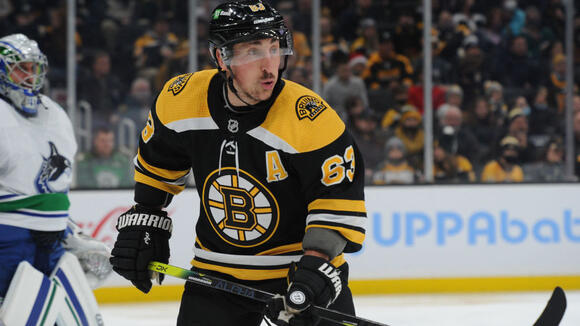 BOSTON (CBS) – The Boston Bruins earned a 3-2 victory over the Vancouver Canucks on Sunday, but the contest wasn’t without controversy.

Bruins star Brad Marchand has been suspended three games by the NHL for slew-footing Canucks defenseman Oliver Ekman-Larsson during the first period. The NHL’s Department of Player Safety made the announcement Monday night.

Slew-footing is the act of using your leg or foot to knock an opponent’s foot out from under him.

No penalty was called at the time. Marchand will have to forfeit $91,875 of his salary.

Marchand earned a two-game suspension for slew-footing in 2015.

An explanation of the decision is available here.

The NHL season officially started back on October 12. In this article, we track all the NHL games today as
NFL・14 HOURS AGO
Sportsnaut

Now that the 2021-22 season is about half of the way through, and Covid is ravaging many clubs, it’s time
NHL・1 DAY AGO
NESN

Vincent Trocheck has faced the Boston Bruins plenty of times throughout in his career. So, he knows Brad Marchand well. The Carolina Hurricanes are set to play the Bruins on Tuesday at TD Garden, marking another opportunity for the 28-year-old to go up against Marchand. Trocheck, formerly of the Florida Panthers until he was traded to Carolina at the 2020 deadline, is a two-way forward with good offensive upside who always finds ways to mix things up and get under opponents’ skin.
NHL・1 DAY AGO
NESN

Vincent Trocheck on Tuesday was asked if he sees some similarities between his game and Brad Marchand’s. It appears Marchand does not agree with his answer. Trocheck was posed the question ahead of the Carolina Hurricanes’ game against the Boston Bruins at TD Garden. Trocheck first responded with a zinger, asking the reporter if he was calling him a rat, before answering that it was a fair comparison to make.
NHL・1 DAY AGO

Carolina Hurricanes forward Vincent Trocheck got the attention of Boston Bruins forward Brad Marchand before Tuesday night's game at TD Garden. For context, Trocheck was asked by a reporter Tuesday morning if his style of play is similar Marchand's, and this was his response:. Marchand responded to Trocheck's comments with...
NHL・1 DAY AGO
CBS Boston

BOSTON (CBS) — Brad Marchand’s star power was on full display last week, as the Bruins winger recorded at least two points in all four of Boston’s games. On Monday, the NHL honored him as the league’s First Star of the Week. Marchand dominated the ice last week, leading the NHL with six goals and 10 points in his four games — all Boston victories. The highlight of his week came in Boston’s 5-1 win over the Montreal Canadiens last Wednesday, when Marchand tallied his fifth career hat trick in the victory. Before that game, Marchand had a two-goal effort in a...
NHL・2 DAYS AGO
theathletic.com

Welcome to our NHL player cards page where you will find data visualizations for each relevant player on the Boston Bruins, stylized as hockey cards. Each card contains a player’s info, role, and salary as well as his stats — both basic and advanced, projected and actual — for an at-a-glance look at his value and ability.
NHL・2 DAYS AGO
WEEI Sports Radio

The NHL announced the dates and times for nine rescheduled Boston Bruins games. Their February break – initially scheduled for the Olympics – has now been filled in.
NHL・5 HOURS AGO

Brad Marchand didn't become the best all-around left winger in the NHL overnight. It took years of hard work and perseverance to not only earn a regular role with the Boston Bruins, but also rise up the lineup to first-line status. Marchand broke into the league as a fourth-liner who...
NHL・11 HOURS AGO
Sportsnaut

The Boston Bruins will look for a return to normalcy when they host the Washington Capitals on Thursday night. The
NHL・7 HOURS AGO
Golf Digest

Brad Marchand calls himself a Lamborghini, gets immediately totaled by the Carolina Hurricanes

Things change fast in this business. On Tuesday afternoon, Brad Marchand was the toast of the town, with every R-dropping pucks nut in the Commonwealth clinking their Boston Lagers in celebration of Marchand’s war of words with the Carolina Hurricanes’ Vincent Trocheck. By Tuesday night, the Bruins forward was lying face down on Storrow Drive, steamrolled by a 23-year-old Canes social admin.
NHL・11 HOURS AGO

BOSTON (CBS) — Robert Williams is not suiting up for the Celtics in Monday afternoon’s matinee against the New Orleans Pelicans at TD Garden. But the big man has a really good excuse for his absence. In a time where players are landing in health and safety protocol on a daily basis, Williams’ absence on Monday is for the best reason possible. The 24-year-old and his girlfriend are at the hospital awaiting the birth of their child. Williams shared a picture of the couple waiting for their baby to arrive on Monday morning: papa time lord incoming pic.twitter.com/r9yMIz5su0 — Jared Weiss (@JaredWeissNBA) January 17,...
NBA・2 DAYS AGO
WFAN Sports Radio

Islanders veteran Zdeno Chara dropped Flyers defenseman Zack McEwan with an uppercut to the face, then made sure to check if his opponent was OK.
NHL・9 HOURS AGO
CBS Boston

BOSTON (CBS) — The Celtics are taking a flyer on injured center Bol Bol while also getting closer to avoiding the luxury tax. The Celtics have reportedly reached a three-team deal with the San Antonio Spurs and Denver Nuggets that will bring Bol and PJ Dozier to Boston. In the deal, which was first reported by ESPN’s Adrian Wojnarowski late Tuesday night, Boston is sending Juancho Hernangomez to San Antonio while Denver is receiving Bryn Forbes from the Spurs. Hernangomez was barely playing for the Celtics, so the move is mostly to shed his nearly $7 million salary to help Boston...
NBA・14 HOURS AGO
Sportsnaut

Where Raymond goes from here is up to him. He has the inside track for the Calder, and he’s on the path toward a long and successful career in Detroit.
NHL・6 HOURS AGO
Sportsnaut

If you’re looking for fantasy hockey tips for the games ahead, you have come to the right place. As the
NHL・1 DAY AGO