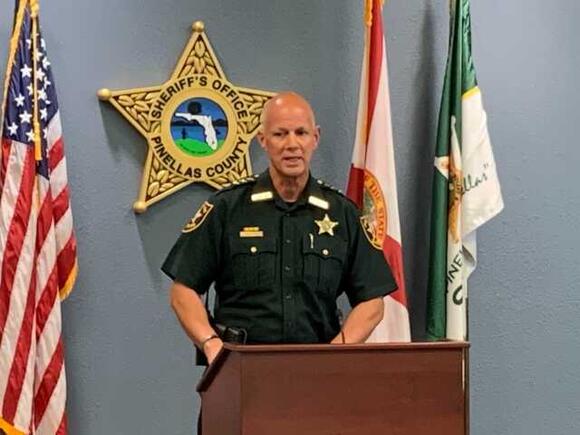 A Pinellas County Sheriff's Office sergeant was arrested for battery and official misconduct on Monday, the sheriff's office said.

According to PCSO, the incident happened at the Pinellas County Jail on Nov. 19.

Detectives said 41-year-old Terrell Johnson was arrested by St. Pete police and was being held in a temporary housing unit at the Pinellas County Jail on Nov. 18. While being held in the unit, detectives said Johnson began his initial medical screening but became disruptive and uncooperative with the staff.

The deputy assigned to Johnson's unit handcuffed him and placed him in a cell to de-escalate the situation. However, while in the cell, Johnson began to kick the cell door.

"Johnson remained uncooperative when he was in the cell. He was yelling and screaming and shortly before 8 a.m. when he was still in the single cell, handcuffed behind his back, he began kicking the cell door," said Sheriff Bob Gualtieri.

"It doesn't matter who you are or what you did, he didn't deserve to get treated that way. You have a man that is handcuffed behind his back. He's helpless," said Sheriff Gualtieri. "Sgt. Knight had Johnson's head braced against a wall and he was holding his head by his hair. Sgt. Knight pulled Johnson's hair so hard that a clump of hair came out of his head."

It was later discovered, Sergeant Knight's written report and verbal account of what happened showed inconsistencies. A corporal, who also went inside Johnson's cell, recanted his initial statement and admitted Knight was in the wrong and struck Johnson.

After being notified of the investigation, Knight resigned from the PCSO on Nov. 22, the sheriff's office said.

On Nov. 29, Knight was arrested and charged with one count of battery and one count of official misconduct. The sheriff's office hired Sgt. Knight in 1996.

The sheriff says a Polk County man has died after deputies were forced to shoot him.
POLK COUNTY, FL・2 DAYS AGO
ABC Action News WFTS

A Tennessee deputy was found dead in her burning home Sunday evening, and now the Tennessee Bureau of Investigation (TBI) is looking into the case.
TENNESSEE STATE・1 DAY AGO

Violent police chase, shootout ends with one man in custody

Multiple law enforcement agencies were on the scene of a shooting involving a Hillsborough County Sheriff's Office that happened in Lakeland Wednesday.
HILLSBOROUGH COUNTY, FL・7 DAYS AGO

A Bradenton man is behind bars after he shot another man dead during an argument, according to deputies.
BRADENTON, FL・7 DAYS AGO
ABC Action News WFTS

The Federal Bureau of Investigation Denver office issued a statement Friday saying that during their investigation, they did not identify any other individuals "directly involved" in Gabby Petito's death other than Brian Laundrie.
PUBLIC SAFETY・5 DAYS AGO
ABC Action News WFTS

A Hillsborough county auto shop says someone is casing local parking lots and stealing a very expensive part from specific cars. And so far, they've hit at least 8 cars in the bay area.
5 DAYS AGO