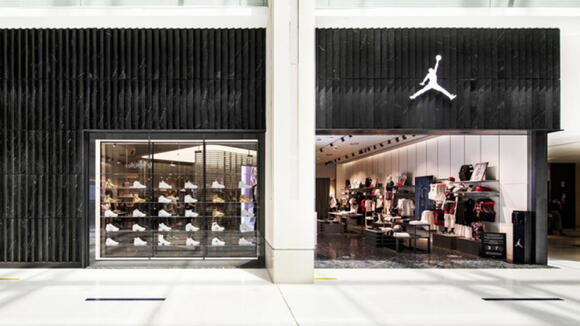 Union’s collaborative versions of Michael Jordan’s signature shoe features a breathable nylon upper that’s coupled with premium suede overlay panels on the midfoot and mudguard. In addition, Union has applied its signature “UN/LA” branding underneath the eyestay along with another tag by the ankle collar revealing that the collab is scheduled to release during this year’s holiday season. The first style will don blue accents on the upper while the latter pair features orange hits. Rounding out the look is a white midsole and a gray rubber outsole.

Union LA and Jordan Brand have been releasing collaborative Air Jordans since 2018 when the two entities released their two vintage-inspired Air Jordan 1 Highs. The brands followed it up with two Union x Air Jordan 4s in the “Guava Ice” and “Off Noir” colorways last year.

While an early look at the Union x Air Jordan 2 collabs was revealed by @zSneakerheadz , release info for the styles hasn’t been announced by either Union LA or Jordan Brand but each pair is expected to come with a $225 price tag.

Last July, Virgil Abloh, the late artistic director of menswear for Louis Vuitton, launched the “Post-Modern” Scholarship Fund. The incentive—created to foster equity and inclusion in the fashion industry—provides Black students, African-American students or students of African descent with college scholarships and more. The designer was organizing a charity auction that supported the cause and it’s going ahead soon. Louis Vuitton announced it’s collaborating with Sotheby’s to auction 200 special-edition pairs of Louis Vuitton and Nike “Air Force 1” sneakers by the designer from January 26 to February 8. Made of calf leather, the kicks were originally created for the brand’s...
AEROSPACE & DEFENSE・8 DAYS AGO
Robb Report

Belgian watchmaker Ressence is back with a third take on its award-winning Type 3 timepiece. Dubbed the Type 3BBB (which stands for, erm, ‘Black, Black, Black’), the oil-filled mechanical watch is the first in its series to feature a polished black DCL (diamond-like carbon) coated case in grade 5 titanium. The extremely hard varnish prevents the 44 mm example from galling and corrosion, while the figure’s crown-free case and an edge-to-edge sapphire crystal—on its front and caseback—help elevate its design. It’s supposed to resemble a smooth, black pebble that has been shaped by time and water. The limited-edition piece is being...
BEAUTY & FASHION・4 DAYS AGO
Robb Report

It’s going to be a massive year for Audemars Piguet as it rolls out the red carpet for its legendary Royal Oak collection, which is celebrating its 50th anniversary. The Gérald Genta-designed watch, first released in 1972, has become so iconic for the brand that some would argue it is the brand despite recent attempts to create new collections like Code 11.59. The Royal Oak is hotter than ever and Audemars Piguet CEO François-Henri Bennahmias has big plans to keep it that way. At a digital press conference on Tuesday to reveal the much anticipated 2022 Royal Oak models, the...
DESIGNERS & COLLECTIONS・2 DAYS AGO
sneakernews.com

Teased ad nauseam since December 2020, the Air Jordan 9 “Chile Red” is finally set to release on February 25th after a number of delays. Predominantly dipped in a ruby tone, the upcoming retro quickly garnered comparisons to the “Motorboat Jones” colorway that dropped in December 2012 as part of the Air Jordan “Kilroy Pack,” a collection of six sneakers inspired by various alter-egos Michael Jordan went by following his first retirement from the NBA. In comparison to its “Challenge Red” predecessor, however, the “Chile Red” option boasts its scarlet hue much more prominently across its upper, going as far as delivering it in patent leather fashion right above the midsole. Outsoles, lace loops and detailing throughout the heel deliver “Black” contrast, which unquestionably nods to the Chicago Bulls’ team colors.
APPAREL・11 DAYS AGO

The Air Jordan 6 Arrives In “Red Oreo” Later This June

Twists to beloved colorways are nothing new for Jordan Brand. What is, however, is the more frequent use of red, which has taken the helm of reimagined offerings such as the “Red Thunder.” Here, yet another, the Air Jordan 6 “Oreo,” is seeing the same treatment, albeit with additional tweaks to the color blocking.
BEAUTY & FASHION・10 DAYS AGO
sneakernews.com

First teased at the tail-end of June 2021, the Air Jordan 5 “Racer Blue” has finally emerged via official images ahead of its February 12th release date. Reminiscent of the mix one would get when combining the model’s famed “Stealth” and “Oreo” colorways, the upcoming sneakers indulge in a mostly “Black” suede construction. Signature mesh profile windows and reflective tops of tongues deviate from their stealthy surroundings in shades of silver, with the latter components also featuring detailing in the titular “Racer Blue” tone. Jumpman logos on the spine employ a slightly-lighter variant of the aforementioned blue, while midsoles and branding visible through the semi-translucent tread revert to a rich shade reminiscent of “Royal”-colored Air Jordans of yesteryear.
APPAREL・7 DAYS AGO
The Ringer

A New Take on the Air Jordan 6

The Ringer’s Wosny Lambre takes a look at the new design of the Air Jordan 6 that will be released later this year. He also explains upcoming release of the Nike and Louis Vuitton posthumous Virgil Abloh collaboration of the Air Force 1, and breaks down some off-court outfits he came across this week.
AEROSPACE & DEFENSE・7 DAYS AGO
sneakernews.com

Lately, both Nike and Jordan Brand have taken a vested interest in the 2000s, bringing back some of the decade’s most notable silhouettes and colorways. And soon, we’ll see the return of one of 2006’s most beloved: the Air Jordan 5 “Green Bean.”. Before in-hand images...
APPAREL・9 DAYS AGO

The Jordan 6 Rings ‘Playoffs’ is inspired by the classic Air Jordan 13 ‘Playoffs’ and will land at retailers in 2022. As you can see, this Jordan 6 Rings features the same colors and blocking as the Air Jordan 13. Utilizing Black on the base while constructed with mesh on the upper and leather on the overlays. Both Yellow and Red accents land on the tongue, heel, insole branding, and outlining the outsole. Lastly, White fills in the midsole pods and most of the outsole to finish the look.
APPAREL・7 DAYS AGO
hypebeast.com

Take an Official Look at the Air Jordan 7 "Afro Beats"

In celebration of the 30th annivesary of the Air Jordan 7 silhouette, Jordan Brand has released a special edition colorway “Afrobeats.”. The Air Jordan 7 “Afrobeats” pays homage to the Afrobeats music genre. Afrobeats is an umbrella term used to describe popular music from West Africa that often combines elements of various styles including fuji music and highlife with American jazz, soul and funk influences. The category of music focuses on intersecting complex rhythms, percussions and vocals for an in-depth multi-instrumental genre. The shoe is constructed in vachetta tan, black, taxi and a dark concord color scheme. The majority of the upper is dressed in a two-toned tan upper and features black and white detailing as well as purple and yellow accents on the midsole. Geometric graphic prints are highlighted throughout the shoe.
DESIGNERS & COLLECTIONS・10 DAYS AGO
sneakernews.com

2022 is already off to quite the start, and there’s plenty more to look forward to just months down the road. But among the many, many reveals, the return of the Air Jordan 3 “Fire Red” is undoubtedly the most exciting. And considering the shoe is to arrive featuring “Nike Air” along the heel, it’s likely the Retro will garner the attention of as many old fans as it has new ones.
APPAREL・11 DAYS AGO
sneakernews.com

Despite receiving a much more infrequent retro cycle than other silhouettes among Michael Jordan’s first 10 signature sneakers, the Air Jordan 7 has served as inspiration across other designs offered by NIKE, Inc. over the decades. As the model enters its 30th anniversary, however, it’s set to satisfy countless enthusiasts’ desire for a proper retro of some of its most iconic colorways, including 2006’s “Citrus” makeup.
APPAREL・10 DAYS AGO

According to reports, A Ma Maniére is now expected to continue its partnership with Jordan Brand for 2022. Expected to release later this year, the Atlanta retailer is now preparing an Air Jordan 2 Retro SP to release in a “Sail/Black/Burgundy Crush” colorway. Building on the tones...
APPAREL・8 DAYS AGO
Footwear News

Bad Bunny and Adidas have another sneaker collab coming soon. After delivering an all-black Forum Buckle Low style in August, the German sportswear giant and the Puerto Rican musician are expected to drop their latest Forum Powerphase collab after product images of the shoe surfaced this week. The shoe features a predominantly brown color scheme on the mesh-based upper that’s combined with suede and leather overlay panels on the mudguard and heel. Breaking up the look is the orange Three Stripes branding on the sides including the rapper’s first name printed at the midfoot, a black toe box and a blue heel...
APPAREL・2 DAYS AGO
hypebeast.com

2022 may have just started, but Jordan Brand is already bringing the heat. The latest red-hot release from the Jumpman is the Air Jordan 4 “Red Thunder,” outfitted in a classic and always popular red-and-black color combination inspired by the Chicago Bulls. The release harkens back to 2006’s “Thunder” release (and a 2012 reissue), replacing the older shoe’s “Tour Yellow” accents with hits of crimson. Since its debut at the 1989 NBA All-Star Game in Houston, the model has remained a fan favorite, distinguishing itself with signature netting on the upper and plastic lace eyestay wings.
BEAUTY & FASHION・13 DAYS AGO
sneakernews.com

This Air Jordan 1 Mid Is Inspired By The African Continent

The Air Jordan 1 Mid has acted as a canvas for a number of influences, some obviously more eccentric than others. Here, the silhouette ostensibly draws inspiration from the African continent, whose shape is pictured right on the heel. Surrounding its image is a number of vibrantly colored panels, each...
APPAREL・5 DAYS AGO
hypebeast.com

Kanye West Posted a Jordan Brand Logo on His Instagram

You never know what to expect when it comes to Kanye West. Shortly after Marcus Jordan — the son of NBA legend Michael Jordan — made a comment on Instagram saying that he wants to set up a meeting with his father, DJ Khaled and the creative genius, he took to social media to — strangely enough — post an image of the Jordan Brand logo along with a cryptic caption of the double eyes emoji.
CELEBRITIES・7 DAYS AGO
realsport101.com

Pastel tones are the theme with this new Jordan 11. The Air Jordan 11 Low appears to be getting a pastel makeover for its next "Pure Violet" release. This should be the perfect sneaker to add to your Summer rotation if you're a Jordan fan, and the ideal replacement for the Wintery "Cool Grey" 11 if you were lucky enough to get your hands on a pair.
APPAREL・14 DAYS AGO
sneakernews.com

Over the course of 2021, Jordan Brand seemingly upped the number of kids’ exclusives, providing the younger crowd the “Wild Things” Air Jordan 4 and no shortage of Air Jordan 1 Mids. This year, the Air Jordan 3 is joining the catalog, dressing up in a colorful “Kumquat” colorway.
BEAUTY & FASHION・8 DAYS AGO
Hypebae

A Second Air Jordan 1 Platform Has Been Revealed

Jordan Brand continues to reinvent the classic AJ1 with winterized models, improved cushioning and a platform iteration aptly named the “LV8D.” Following a “Bred” iteration, a second colorway has been revealed via Instagram user @teddyssole. The lifestyle sneaker starts with a white leather base with a...
APPAREL・14 DAYS AGO