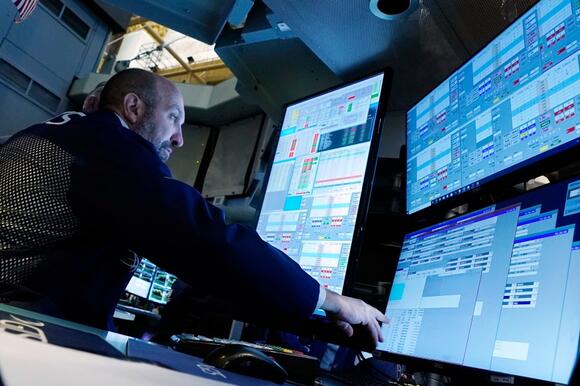 NEW YORK (AP) — Wall Street steadied itself Monday after last week’s stock market slide caused by the newest coronavirus variant, with investors now waiting for more clues about just how much damage it may do to the economy.

The S&P 500 rose 1.3% to recover more than half of its drop from Friday, which was its worst since February. Bond yields and crude oil also recovered chunks of what they lost in traders’ knee-jerk reaction to run toward safety and away from risky investments.

With vaccines in hand — and with the benefit of a weekend to mull whether Friday’s sharp market moves were overdone — analysts said the world may be in better position to weather this newest potential wave . Plus, Friday’s tumble for markets may have been exacerbated by many traders taking the day off following Thanksgiving.

So just why is inflation so high, and how long will it last?

But while the market steadied itself, uneasiness still hangs over it due to the discovery of the variant now known as omicron. The variant appears to spread more easily, and countries around the world have put up barriers to travel in hopes of stemming it. Still to be seen is how effective vaccines currently available are for the variant, and how long it may take to develop new omicron-specific vaccines.

“There are still more questions than answers regarding the new variant,” said Ryan Detrick, chief market strategist for LPL Financial. “At the same time, we’ve been living with COVID-19 for almost 20 months now, and we’ve seen multiple variants.”

The most powerful lift for stocks came from those that have been able to grow strongly almost regardless of the economy’s strength or pandemic’s pall. Gains for five big tech-oriented stocks — Microsoft, Tesla, Apple, Amazon and Nvidia — alone accounted for more than a third of the S&P 500’s rise. The gains for tech-oriented stocks also helped to drive the Nasdaq composite up a market-leading 1.9%.

Moderna jumped 11.8% for the biggest gain in the S&P 500, adding to an even bigger gain from Friday, after it said it’s testing the effectiveness of its vaccine against omicron. Its CEO said in a televised interview on ABC that it could take two to three months for a vaccine developed specifically for the variant to begin manufacturing.

Travel-related stocks started the day with gains but fell back as more caution filtered into the market and as travel restrictions around the world remained in force. They ended mixed after President Joe Biden said he wasn’t considering a widespread U.S. lockdown. He said the variant was a cause for concern and “not a cause for panic.” Delta Air Lines and American Airlines closed slightly lower, while cruise line operators Carnival and Norwegian Cruise Line notched gains.

Quarles to leave Fed’s board, giving Biden another slot

“Because so much is still unknown about the omicron variant, it could take us a week or more to recover what we lost in a single day,” said Sam Stovall, chief investment strategist at CFRA.

The yield on the 10-year Treasury rose to 1.51% from 1.49% late Friday, recovering some of its steep slide from 1.64% that day. It tends to rise and fall with expectations for the economy’s strength and for inflation.

The VIX, an index that measures how worried investors are about upcoming drops for the S&P 500, also eased significantly. But it’s not all the way back to where it was before omicron.

Besides waiting on more clues about how much economic damage omicron will ultimately do, the market has several big mileposts this week that could swing prices. The headliner is likely Friday’s jobs report, where economists expect to see an acceleration in hiring by employers during November.

“Omicron reinforces that the economy remains tethered to the pandemic,’’ Mark Zandi, chief economist at Moody’s Analytics, said on Twitter Monday. “With each new wave of the pandemic, the economy will suffer slower growth and higher inflation.’’

The U.S. economic recovery lost significant momentum when the highly contagious delta variant hit over the summer. Economic growth slowed to an annual rate of 2.1% from July through September from 6.7% from April through June and 6.3% from January through March. The S&P 500 had its worst onth of the year in September, falling 4.8%.

Still, more Americans are vaccinated now, and the economy has shown resiliency, regaining speed after the summer slowdown. Zandi tweeted that “the most likely scenario is the economy will manage through each wave better than the one before it.’’

Of course, the only way to know which scenario will ultimately occur is to wait to see it through. And that uncertainty in the meantime could lead to more up-and-down swings for the stock market, which has surged more than 24% this year and set a record as recently as Nov. 18.

“We’re just going to be in the dark for several weeks here,” LPL’s Detrick said.

Why doing laundry may get more expensive in March

Sick of hearing about how everything is becoming more expensive 2022? Well, it's unfortunately time to add one more thing to the list – doing laundry.
BUSINESS・7 HOURS AGO
FOX40

The results suggest that Earth is "cooling and becoming inactive much faster than expected," professor Motohiko Murakami at ETH Zurich told the Weather Channel India.
ASTRONOMY・11 HOURS AGO
MarketWatch

Wall Street will be monitoring home price appreciation and how the mortgage market fares as the Federal Reserve looks to end its emergency programs.
BUSINESS・9 HOURS AGO

Oil futures are at seven-year highs and a further push that takes Brent above $90 a barrel could be the straw that breaks the back for a struggling stock market, one chart-watcher warns.
TRAFFIC・9 HOURS AGO
The Motley Fool

These Stocks Are the Bright Spot in an Ugly Market

The stock market failed to bounce back on Wednesday.
STOCKS・8 HOURS AGO
The Motley Fool

Shareholders of these companies could see monster returns in 2022.
STOCKS・19 HOURS AGO
MarketWatch

“Multiasset portfolios might face some headwinds as policy gets tighter,” JPMorgan Chase & Co. strategists said in a note released Wednesday.
MARKETS・10 HOURS AGO

5 Charts to Remember if the Stock Market Crashes in 2022

Lessons from the past can guide investors if history is repeating.
STOCKS・20 HOURS AGO
MarketWatch

Stocks opened higher Wednesday, taking back some of the ground lost in the previous session when the 10-year Treasury yield jumped to a two-year high. The Dow Jones Industrial Average rose 123 points, or 0.3%, to 35,492, while the S&P 500 gained 0.4% to 4,595. The Nasdaq Composite was up 0.5% at 14,584. The tech-heavy Nasdaq on Tuesday led major indexes to the downside, dropping 2.6% and finishing below its 200-day moving average. Bank earnings appeared to help sentiment Wednesday, with shares of Bank of America Corp. and Morgan Stanley rising after reporting results.
STOCKS・16 HOURS AGO
MarketWatch

The yield-sensitive Nasdaq Composite Index on Wednesday logs its first close in correction territory since March. Here's what history says happens next.
STOCKS・4 HOURS AGO

Here are a few market-based signs that imply more bumps could lie ahead, or at least highlight the rough path markets traversed thus far.
STOCKS・4 HOURS AGO
The Motley Fool

Bank Stocks Were Unstoppable Last Year: Will the Bull Run Continue in 2022?

There's something happening that could propel banks higher this year.
STOCKS・20 HOURS AGO
The Motley Fool

The EV upstart has fallen out of favor among more value-focused investors.
STOCKS・1 DAY AGO
MarketWatch