Lionel Messi to Robert Lewandowski: 'You Deserve Your Ballon D'Or' 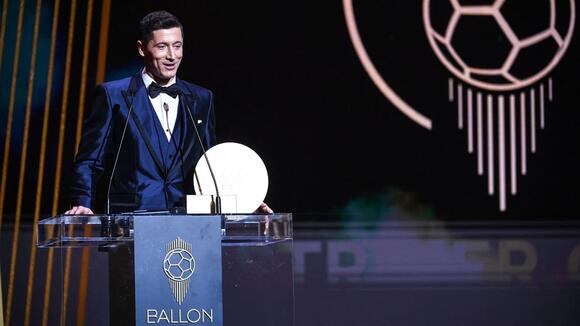 Lionel Messi won the seventh Ballon d'Or on Monday, but said runner-up Robert Lewandowski should have won last year and deserves a trophy of his own.

Lionel Messi won his seventh Ballon d'Or on Monday , but he thinks runner-up Robert Lewandowski deserves some hardware himself.

Last season, France Football , the magazine that awards the Ballon d'Or, canceled the ceremony for the first time in its 64-year history, when Lewandowski was considered one of the favorites to win. In his victory speech Monday in Paris, Messi made sure everyone knew that the Polish star deserved the trophy.

"I want to tell Robert that it is an honor for me to be up against him," Messi said. "You deserve your Ballon d'Or. Last year everyone agreed that you were the winner. I think France Football should give you your Ballon d'Or so you can have it like you deserve.

"Hopefully France Football can give it to you to have in your home, because you were the true winner if it weren't for the pandemic. You should have one in your house too."

In the 2020-21 season, Lewandowski broke Gerd Müller's single-season Bundesliga goalscoring record with 41 goals. This year, he also scored in 19 straight games for Bayern from February to September, continuing his prolific last two years .

While the Bayern Munich star missed out on the Ballon d'Or this season (580 points to Messi's 613), Lewandowski won the inaugural Striker of the Year award on Monday.

Alexia Putellas has won the 2021 Best Fifa Women’s Player award to complete a double of major individual honours following her victory at the Ballon d’Or last month. The Barcelona captain saw off competition from teammate Jennifer Hermoso and Chelsea striker Sam Kerr to win the award at a ceremony in Zurich on Monday night. She becomes the first Spanish player to win the award after playing a key role in Barcelona’s dominant treble-winning campaign, which saw the club lift the Women’s Champions League as well as the Primera División and Copa de la Reina. “I’m very happy, I’m thrilled,”...
FIFA・2 DAYS AGO
Sports Illustrated

Robert Lewandowski took home his second straight award, but one star competitor left him off the ballot completely.
UEFA・2 DAYS AGO
LFCTransferRoom

Bayern Munich's Robert Lewandowski has been crowned the FIFA Best Men's Player Award for 2021 and fans have reacted to this on social media. The Polish international has enjoyed another year of prolific goal scoring and retains the award he won in 2020. Lewandowski held off competition in the final...
FIFA・2 DAYS AGO
dallassun.com

The Bayern Munich goal machine avenged missing out on the Ballon d'Or. Less than two months after being snubbed for the Ballon d'Or, football superstar Robert Lewandowski has beaten PSG and Argentina hitman Lionel Messi and Liverpool and Egypt hero Mohamed Salah to the FIFA Men's Player Award 2021. Poland...
FIFA・2 DAYS AGO

Robert Lewandowski was voted the best men’s player in the world on Monday, retaining the FIFA award he won last year despite being left off the ballot paper filed by runner-up Lionel Messi. The Bayern Munich forward overturned the result last month of the Ballon d’Or prize where he...
FIFA・2 DAYS AGO
90min.com

1. Bolivia - 8 goals. Messi has been deadly against Bolivia as they rank as the international team he has scored the most with eight goals to his name, with the player opening his account against them as he scored a brace in a 7-0 win in an international friendly in September 2015.
SOCCER・14 HOURS AGO
The Independent

LaLiga’s two biggest clubs were in the headlines recently as they fought out the first El Clasico of the new year in the Spanish Supercopa - an encounter Real Madrid just about edged, before going on to claim the trophy itself against Athletic Club.Now all three sides are back on our screens on Thursday night as the Copa del Rey takes centre stage, with the round of 16 ties pitting Barcelona against Athletic - a repeat of last season’s final, which Barca won 4-0. The current side looks rather different to the one which took to the field last April...
UEFA・1 HOUR AGO
The Independent

Ralf Rangnick has no concerns about selecting Paul Pogba during the final months of his Manchester United contract, even if the midfielder’s only motivation to play well is to earn a deal at another club.Pogba has entered the final six month of his current Old Trafford terms, with little progress made in discussions over a renewal and a departure on a free transfer in the summer considered likely.The 28-year-old is yet to make an appearance under interim manager Rangnick after suffering a thigh injury while on international duty in November, though returned to full training on Monday.Rangnick expects Pogba...
PREMIER LEAGUE・1 DAY AGO

Ronaldo was also included in the World11 at the expense of Mohamed Salah, while the women's awards on the night faced backlash from current players.
FIFA・2 DAYS AGO
The Independent

Arsenal are optimistic their Carabao Cup semi-final second leg against Liverpool will go ahead as planned on Thursday night.The Gunners successfully appealed to the Premier League to have Sunday’s north London derby away to Tottenham called off in the absence of a number of players.Injuries, suspension, coronavirus cases and losing players to the Africa Cup of Nations saw Mikel Arteta’s ranks depleted enough for the league to postpone their scheduled fixture.However, the PA news agency understands there have been no additional Covid-19 cases in the past two days and a couple of players are now likely to be fit following...
PREMIER LEAGUE・2 DAYS AGO
San Diego Union-Tribune

Was this the attitude Cristiano Ronaldo demanded?Whatever about refusing to accept criticism, Manchester United’s new generation refused to accept anything other than victory.It was certainly the response, and the result, Ralf Rangnick and his team needed.On a night when they were often second best to Brentford, and mere days after Ronaldo gave such a pointed interview about the attitude of younger players, three of the club’s youth graduates scored to secure a crucial 3-1 win in the race for fourth. The table looks that bit better for United. The mood is that bit improved.That’s the spirit of youth, that feels...
PREMIER LEAGUE・21 HOURS AGO
The Independent

Ralf Rangnick considers the issue with Anthony Martial “resolved” following talks with a player he claimed refused to be involved in Manchester United’s trip to Aston VillaUnited had two goalkeepers among their eight substitutes – one short of the number allowed – for Saturday’s 2-2 draw at Villa Park where the France international was conspicuous by his absence.Martial has made no secret of his desire to leave United this month but Rangnick’s claim that the forward “didn’t want to be in the squad” in Birmingham still shocked onlookers.The 26-year-old took to Instagram later that night to say he “will...
PREMIER LEAGUE・2 DAYS AGO
firstsportz.com

Real Madrid won the Spanish Super Cup for the 12th time in the history of the competition defeating Athletic Bilbao 2-0 in the final on Sunday which took place in Saudi Arabia. Luka Modric and Karim Benzema scored the goals their side. Real booked a place in the final after winning the semi final 3-2 against arch rivals Barcelona in what was an entertaining El Clasico. Spanish Super Cup victory will do tons of good to Real Madrid going forward this season and is surely a welcome trophy for new manager Carlo Ancelotti who took over at the start of the season from Everton for his second spell at Santiago Bernabeau.
SOCCER・2 DAYS AGO
The Independent

Manchester United look set to be without Aaron Wan-Bissaka until after the upcoming international break due to illness.The defender missed Saturday’s 2-2 draw with Aston Villa and United interim boss Ralf Rangnick revealed he was also ruled out of Wednesday’s match at Brentford and would likely be unavailable for the home clash with West Ham three days later.Asked if Wan-Bissaka would be fit to face Brentford, Rangnick told MUTV: “No, not yet. He’s still ill, I’m afraid. He will not be available for the game (on Wednesday) and also probably not available for the West Ham game.“Hopefully, after the international break, he will be back for training.”After the break that follows the West Ham fixture, United are scheduled to be back in action on February 4 with an FA Cup tie at home to Middlesbrough.
SOCCER・1 DAY AGO
The Guardian

Newcastle United have seen their initial bid to sign Jesse Lingard on loan from Manchester United rejected.Lingard, whose contract is set to expire at the end of the season, is one of several players at Old Trafford eager to find regular first-team football elsewhere.Newcastle are keen to make Lingard the third signing since the Saudi Arabia-led takeover, following the arrivals of Kieran Trippier and Chris Wood.Ralf Rangnick, United's interim manager, has admitted that his squad is too big to give regular opportunities to all of his players but is wary of the need for depth during a Covid-affected season.A loan...
PREMIER LEAGUE・1 DAY AGO
The Independent

Just like the hang time of his extraordinary lob against Scotland this summer, there have been moments this season when Patrik Schick feels as though he’s been walking amongst the clouds. It has been seven months since his halfway-line goal left Hampden Park suspended in equal parts amazement and anguish, but that day still remains the starting point of another outlandish trajectory.It might have been a little overshadowed by the twin auras of Robert Lewandowski and Erling Haaland, but since finishing as the Euros’ joint-top scorer, Schick has quietly transformed himself into one of the continent’s most formidable strikers. Last...
FIFA・9 HOURS AGO
San Diego Union-Tribune