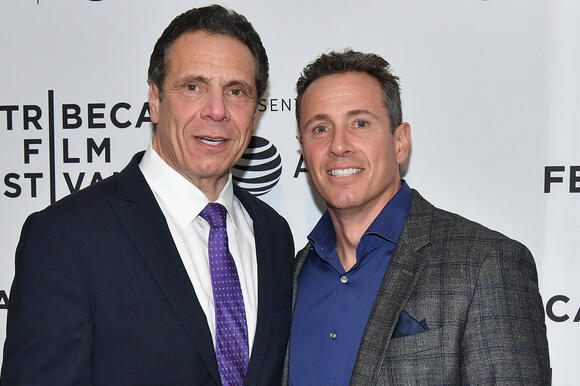 Chris Cuomo hosts a primetime CNN show on which he discusses national political issues. He’s also the brother of Andrew Cuomo , the disgraced former governor of New York who resigned in August in the wake of a damning report detailing several allegations of sexual misconduct. It was a pretty big conflict of interest, especially considering Cuomo the younger was advising his brother on how to weather the scandal. Documents released on Monday by the New York attorney general’s office reveal that Chris was involved more intimately than previously believed.

In an interview with state investigators , Chris said he talked to other journalists about what they were hearing about allegations coming down the pike, and then fed information to Melissa DeRosa, Andrew’s top aide. “I have a lead on the wedding girl,” Chris texted DeRosa days after The New York Times reported that Andrew attempted to kiss a woman at a wedding. The “lead,” which turned out to be false , was that the girl, Anna Rauch, was lying about the encounter.

“Rumor going around from politico 1-2 more ppl coming out tomorrow. Can u check your sources?” DeRosa texted Chris the same month. “On it,” Chris responded. Chris worked his sources to gather “intel” on Pulitzer Prize-winning journalist Ronan Farrow’s then-forthcoming story on Andrew’s accusers, as well, at the request of DeRosa.

The documents released Monday also provide more details about how Cuomo offered his help with Andrew’s crisis management effort. It read less like an offer and more like a demand, as Chris expressed concern over how the governor’s team was handling the situation and implored DeRosa to let him help with the prep and “trust” his advice. “We’re making mistakes we can’t afford,” Cuomo wrote to DeRosa.

He was also working with DeRosa to fine-tune the governor’s statements responding to the wave of accusations. In one instance, Chris provided a complete written statement to DeRosa. “I will not resign, I cannot resign,” the texted statement reads, in part.

The news that Chris Cuomo was feeding DeRosa information ascertained through his media connections adds more color to a picture of his involvement in his brother’s damage control efforts that has been developing throughout the year.

The Washington Post reported in May that Chris was participating in conference calls about how his brother should deal with the scandal, and suggested pinning the outrage on cancel culture — which Andrew did indeed do during a conference call in March . The documents released Monday include text messages in which Cuomo informs DeRosa that one of his friends had Alec Baldwin go on an anti-cancel culture rant defending Andrew Cuomo … and Woody Allen. (Cuomo in his interview with investigators said he tried to get his friend to tell Baldwin to “stay out of it,” to no avail.)

CNN acknowledged in May that Cuomo advising his brother’s efforts to weather the scandal was inappropriate, but excused it in part by noting that he had “not been involved in CNN’s extensive coverage of the allegations against Governor Cuomo — on air or behind the scenes.” Chris apologized on the air. “It will not happen again,” he said. “It was a mistake because I put my colleagues here, who I believe are the best in the business, in a bad spot.”

State prosecutors revealed months later that Chris had been CC’d on emails among Andrew’s team, as well as several other details of his involvement as the allegations of sexual misconduct threatened to bring down the political scion at the helm of one of the nation’s most populous states.

CNN and Cuomo may have acknowledged that participating in meetings with his brother’s team was inappropriate, but using connections developed through his job as a political commentator to aid one of the nation’s most powerful politicians as he tries to navigate a sexual misconduct scandal represents another level of unethical behavior. It’s the type of below-board, conflict-of-interest dealing that would likely get anyone not named “Cuomo” fired, and which at the very least exacerbates to the public’s waning trust in ostensibly unbiased networks like CNN.

CNN in a statement provided to Rolling Stone said it will look into the documents. “The thousands of pages of additional transcripts and exhibits that were released today by the NY Attorney General deserve a thorough review and consideration,” a spokesperson wrote. “We will be having conversations and seeking additional clarity about their significance as they relate to CNN over the next several days.”

Cuomo did not address the news on Monday night’s episode of Cuomo Prime Time .

They can crucify the Cuomos but its ok if your family name is trump. Where is the true Amerrican justice.

For a while, former President Trump and Florida Governor Ron DeSantis have been tip-toeing around each other, offering public praise while jockeying for GOP voters’ affection ahead of an eventual presidential primary. It made sense, as the two broadly share the MAGA mission and look to the same voters for support. But the niceties were always going to end the minute Ron and Don became political rivals in earnest. This past week appears to been the tipping point, as the two traded barbs, some more veiled than others.
FLORIDA STATE・4 HOURS AGO
Rolling Stone

WASHINGTON — In mid-November, Vice President Kamala Harris joined a video call with a coalition of nearly 250 groups trying to pass new legislation to protect the right to vote and prevent future election sabotage attempts like what happened after the 2020 election. The participants on the call included the heads of major labor unions, civil-rights leaders, and other influential activists who had supported the Biden-Harris ticket in 2020 and would no doubt be called upon to help reelect that ticket in 2024. The voting-reform campaign had reached a critical moment. State legislatures led by Republicans had passed dozens of new...
PRESIDENTIAL ELECTION・13 HOURS AGO
Rolling Stone

The Republicans proclaiming their reverence Monday for Dr. Martin Luther King Jr. make up an all-star roster in the effort to undermine voting rights, a denial of a civil right that disproportionately disenfranchises Black people in the United States. Democrats are currently pushing the Freedom to Vote Act and the John Lewis Voting Rights Advancement Act, a pair of bills aimed at beefing up federal protections for voting rights in the face of a rash of state-level efforts to restrict access to the ballot. President Biden promised such a bill as one of his first acts in office, but Rolling Stone...
CONGRESS & COURTS・7 HOURS AGO
OK! Magazine

CNN's ratings have dropped significantly since being hit with multiple headline making scandals. According to the New York Post, the cable news network had reported only 548,000 viewers during the week of Jan. 3, 2022. This is a vast difference from the nearly 2.7 million viewers CNN ranked in on the same week a year prior.
TV & VIDEOS・4 DAYS AGO

One QAnon follower said: "When he came out…I instantly felt it was not him. I kept trying to convince myself that it was."
ARIZONA STATE・16 HOURS AGO
Business Insider

The Florida governor has managed to cut down Trump's overwhelming lead in recent polls amid reports the pair no longer consider each other allies.
PRESIDENTIAL ELECTION・14 HOURS AGO
Business Insider

Jason Furman also pushed back on Joe Manchin's case that Biden's big bill would worsen inflation, calling it "a bad reason" to oppose the measure.
BUSINESS・1 DAY AGO
Newsweek

Trump also took a shot at the ReidOut's Joy Reid, claiming the "MSDNC" host is "toast."
POTUS・12 HOURS AGO
Newsweek

Former president Trump said that President Biden had made Dr. Anthony Fauci "like a king" during comments to supporters.
ARIZONA STATE・1 DAY AGO

The MyPillow founder made the remarks at Trump's Arizona rally, where many speakers touted conspiracy theories about the 2020 election.
PRESIDENTIAL ELECTION・1 DAY AGO
Newsweek

Fox News host and former Trump supporter Laura Ingraham isn't ready to back him in another bid for the White House, she told a Virginia magazine.
PRESIDENTIAL ELECTION・3 HOURS AGO
The Independent

Vice President Kamala Harris’ new communications director, Jamal Simmons, will meet with members of the Congressional Hispanic Caucus in hopes of quelling controversy over a decade-old tweet that has angered immigrations rights advocates in the days since he was named to Ms Harris’ staff.A White House official told The Independent that Mr Simmons’ meeting with the lawmakers will take place on Thursday and was “mutually agreed upon” by both the veteran Democratic operative and the Hispanic Caucus. Mr Simmons, who started as Ms Harris’ top communicator last week, was brought on to fill the vacancy left by the resignation of...
CONGRESS & COURTS・9 HOURS AGO
Reuters

WASHINGTON, Jan 17 (Reuters) - The U.S. midterm elections are some 10 months away, but President Joe Biden's administration and allies already foresee a possible scenario in which Republicans take the House of Representatives, the Senate, or both, and launch a series of investigations and attempts to impeach the president.
PRESIDENTIAL ELECTION・14 HOURS AGO
WATE

Democrats have been trying to push forward voting rights legislation that Senate Republicans have been stalling through a filibuster.
CONGRESS & COURTS・1 DAY AGO
The Free Press - TFP

Florida Republican Gov. Ron DeSantis said on Friday that he regrets not speaking out “much louder” against federal COVID-19 lockdown early on during the pandemic in 2020. DeSantis’ made his remarks during his appearance on “Ruthless” a conservative podcast that aired Friday, when asked what decisions he would change during his tenure as governor.
FLORIDA STATE・11 HOURS AGO
Newsweek

In theory, Republican Rep. John Katko has a compelling reason to run for re-election: The New York congressman is the ranking member on the Homeland Security Committee, and if the GOP takes back the House majority, he'd be in line to lead the influential panel. But in practice, there's a...
CONGRESS & COURTS・13 HOURS AGO