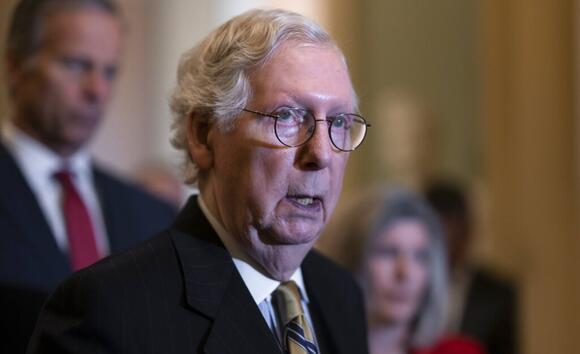 McConnell, a Kentucky Republican, warned that the Build Back Better plan would implement crushing taxes, make inflation worse, and disincentivize work, all while rewarding America's richest with a tax cut.

McConnell launched the criticism the day lawmakers returned from a weeklong Thanksgiving recess and at the start of a mad dash by Democrats to pass a string of spending and policy legislation ahead of Christmas.

Senate Majority Leader Chuck Schumer, a New York Democrat, said Monday that he intends to bring up the Build Back Better measure “before the end of the year,” adding that Democrats are meeting this week with the Senate parliamentarian, who must approve of the House-passed version in order for it to meet Senate rules that will allow Democrats to take up the legislation without subjecting it to a GOP filibuster.

But McConnell warned the new preschool program would be run by Secretary of Health and Human Services Xavier Becerra, whom he called a “culture warrior,” who sued on behalf of California to force religious groups to provide contraceptives in their health coverage.

“If you ask any working-class or middle-class American family for their top concerns, you aren't going to hear many people pining for massive tax hikes, electric car charging stations, and woke bureaucrats getting control of their kids' early childhood,” McConnell said.

No Republican is expected to support the spending bill.

It passed the House earlier this month without a single GOP vote and faces hurdles in the Senate, where moderates Joe Manchin of West Virginia and Kyrsten Sinema of Arizona have not pledged their support for the bill due to concerns over taxes, the legislation’s cost, and certain provisions, including a new methane fee that will raise heating costs.

In addition to the Build Back Better measure, Democrats must negotiate with the GOP to pass an extension of federal government funding by Dec. 3 and an increase in the nation's borrowing limit by Dec. 15.

Sen. John Cornyn, a Texas Republican, blamed Democrats for failing to work with the GOP on a bipartisan agreement to pass government funding bills. None have passed the Senate so far.

Democratic inaction, Cornyn said, has left the Senate "with a whole lot to do and not enough time to do it."

A very small percentage of that money is going to help Americans the rest of it is for their personal little pet peeve projects, that is why I’m against it. If it was going for what is being called it would be a different story

what did Moscow Mitch call his big tax break for the rich that did nothing to help our Country .

no climate change ? just 💰 money ? money for illegals ? Taliban ? afgans, ? an other countries ? nothing us .

Republican leaders in Congress face another pressure campaign from conservative members to shut down the federal government and protest the remaining federal vaccine mandates.
CONGRESS & COURTS・13 HOURS AGO
WashingtonExaminer

Just one month after its apparent death at the hands of Sen. Joe Manchin, the Build Back Better agenda is again being promoted by Democrats, even with few details available for what will actually be in it.
POTUS・7 HOURS AGO
Business Insider

"If all Democrats hang together ... they have the power to replace Justice Breyer in 2022 without one Republican vote in support," Graham said.
CONGRESS & COURTS・11 HOURS AGO

McConnell said he's heard "encouraging" things about what the Biden administration plans to do about the Russian invasion threat.
POTUS・1 DAY AGO
POLITICO

Unpacking some of the wildest theories of what the Biden White House may do with the looming Supreme Court vacancy. What happened: This happens almost every time there's a vacancy atop the nation's highest court, but let's walk through why some of the wildest ideas about the Supreme Court vacancy almost without a doubt won't happen.
CONGRESS & COURTS・9 HOURS AGO
Business Insider

"Nearly 10 million children will be thrown back into or deeper into poverty this winter" if the child tax credit isn't renewed, the letter says.
PRESIDENTIAL ELECTION・19 HOURS AGO

Eyes will be on the two moderate Democrats, who have opposed some of Biden's key legislative priorities and will be needed to confirm his Supreme Court nominee.
PRESIDENTIAL ELECTION・10 HOURS AGO
Newsweek

"Perhaps this means some of our colleagues will miss out on lucrative investment opportunities. We don't care," the lawmakers said.
CONGRESS & COURTS・2 DAYS AGO
CNBC

Democratic donors aim to finance a primary challenge to Sen. Kyrsten Sinema as she votes against key party priorities. Some of those donors gave to her 2018 campaign, and in some cases signed a letter in which they suggested their money should be returned. Rep. Ruben Gallego, D-Ariz., has recently...
CONGRESS & COURTS・12 HOURS AGO
Newsweek

A past Sinema donor said, "I have given up really trying to understand Sinema's motivations for the way she votes."
CONGRESS & COURTS・9 HOURS AGO

Hoyer noted that a stock trading ban for lawmakers would take away their "ability to make investments that we encourage in every other sector."
CONGRESS & COURTS・1 DAY AGO
USA TODAY

A simple majority is all that’s needed to approve a presidential nomination to the country’s highest court.
CONGRESS & COURTS・11 HOURS AGO
The Independent

Senate Democrats who have played defense for the last three Supreme Court vacancies plan to move swiftly to replace retiring Supreme Court Justice Stephen Breyer using the rapid 2020 confirmation of Justice Amy Coney Barrett as a new standard. Barrett was confirmed exactly a month after then-President Donald Trump nominated her to replace the late Justice Ruth Bader Ginsburg — and just five weeks after Ginsburg’s death in September of that year. Democrats sharply criticized that timeline then, arguing that most confirmations had taken much longer and that Republicans were trying to jam the nomination through in case...
PRESIDENTIAL ELECTION・11 HOURS AGO
WashingtonExaminer

Democrats are returning their attention to Biden's big spending bill after Manchin torpedoed it a month ago.
CONGRESS & COURTS・14 HOURS AGO
WashingtonExaminer

The Washington congresswoman told Newsweek about how her new bill crosses over with parts of the $1.75 trillion legislation.
CONGRESS & COURTS・12 HOURS AGO
Business Insider