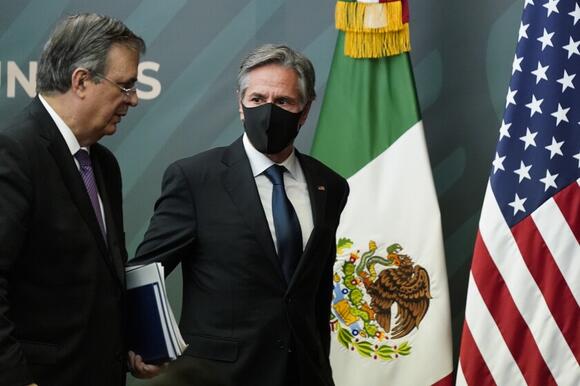 The government of Mexico on Friday made public the concerns that its officials have raised with the Biden administration about the pending restart of the "Remain in Mexico" program.

The program, created by the Trump administration and known officially as Migrant Protection Protocols, dramatically reshaped asylum screening processing in the United States by requiring asylum seekers to wait in Mexico while their immigration court cases proceeded in the United States.

The Biden administration ended the program earlier this year, but a federal judge in Texas has ordered its reimplementation. The judge took issue with the reasoning the administration gave in the memo ending the program and found that the states of Texas and Missouri likely would be harmed because they might have to provide services including drivers licenses to asylum seekers who chose to reside in their state.

In a court filing earlier this month, the administration said that Remain in Mexico would likely return in "the coming weeks."

The Biden administration is waiting on Mexico's decision to accept people returned to its northern border cities in order to reimplement the program. But Mexico signaled on Friday that it still needs certain guarantees from the United States before it will be willing to take in asylum seekers with pending U.S. court cases, including funding for shelters and nonprofits along the border that will have to support the returnees.

Migration negotiations between the two countries have largely happened out of public view. Friday's statement breaks that silence, making Mexico's decision to publicize its concerns even more significant.

Among its "humanitarian concerns," Mexico called for significant improvements in conditions for those waiting in the program, including access to attorneys. In September 2019, about nine months into the program, only about 1 percent of those enrolled had managed to find attorneys.

Mexico also said that the United States would have to expedite cases in the program as much as possible to shorten the amount of time that asylum seekers spent waiting in Mexico and that the U.S. would have to guarantee access to medical attention and COVID-19 vaccines.

The statement called for the United States to exempt people in vulnerable categories from the program, including unaccompanied minors, pregnant people, people with physical or mental illness, older asylum seekers, members of the LGBTQ+ community and indigenous asylum seekers who are monolingual, among others.

Many people in these categories were returned to Mexico under the previous iteration of the program.

Pregnant people were denied entry to the United States for their court hearings because immigration officials have policies against transporting people late in their pregnancy. Indigenous asylum seekers often struggled to understand the system they'd been placed in, particularly with the additional language barriers they faced.

Additionally, Human Rights First gathered more than 6,300 reports of asylum seekers being violently harmed this year after being returned to Mexico through Title 42. That's a Trump administration pandemic policy that the Biden administration has continued even though it places people in similar conditions as Remain in Mexico — conditions that President Joe Biden criticized often on the campaign trail.

Mexico hinted that it is concerned about its ability to keep returned asylum seekers alive and safe. In its Friday statement, it asked the United States to respect designated points of return, "taking into consideration capacities of the [Mexican immigration agency] to provide adequate support to migrants as well as security conditions at the local level."

While it was not clear from the statement where designated points of return might be for the second implementation of Remain in Mexico, all of the areas in northern Mexico along the border are flagged as dangerous by the U.S. State Department because of "crime and kidnapping."

Asylum seekers and other migrants are often targeted for kidnappings in the region.

Mexico emphasized that it believes the solutions to migration through its territory to the United States lie in addressing root causes through programs in its southern region as well as Central America. The two countries will soon roll out a pilot program in Honduras, the statement said, to work toward this goal.

Mexico needs to protect its mexican citizens and its country from this INVASION OTHERWISE THEIR MEXICAN CULTURE WILL DISAPPEAR any country that's being invaded by other parts of countries should protect and defend themselves. These illegal aliens are carrying many infectious diseases no one knows what they are. Mexico will eventually disappear with all of these illegal aliens bringing in their own 3rd world habits.

The U.S. government has restarted the remain-in-Mexico program in South Texas and is sending some asylum seekers back to Mexico, however most are choosing to go to the interior of the country, rather than wait on the border during their immigration proceedings, Border Report has learned. The first asylum seekers have been sent back by the Department of Homeland Security under the Migrant Protection Protocols program (MPP), which was restarted in South Texas on Wednesday.
TEXAS STATE・9 HOURS AGO
San Diego Union-Tribune

Migrants are once again seeking asylum in Canada after the country lifted a 20-month ban
IMMIGRATION・14 HOURS AGO
myrgv.com

DHS: ‘Remain in Mexico’ restarts in the Valley

The Department of Homeland Security has once again begun enrolling migrants seeking asylum in the United States into the Migrant Protection Protocols, more than a year after the department issued a memorandum recommending the program be terminated. “DHS has repeatedly sought to terminate MPP. DHS currently is, however, under a...
IMMIGRATION・3 DAYS AGO
kusi.com

The United States is partnering with the WHO COVAX initiative to send Afghanistan an additional one million COVID-19 vaccines as part of the assistance package.
U.S. POLITICS・13 DAYS AGO
AFP

After decades in US, a migrant's anxious wait for deportation ruling

Juan Reyna spent 25 years living and working in the United States, but his life was turned upside down last January when police stopped the Mexican immigrant outside San Antonio, Texas. It also would have protected those who have lived in the United States for more than 10 years from deportation.
IMMIGRATION・9 HOURS AGO
Washington Times

U.S. to provide $308 million in humanitarian aid to Afghanistan as Taliban gov’t falters

The White House said Tuesday it will provide $308 million in new humanitarian aid for Afghanistan, as the country teeters toward a full-scale humanitarian crisis and economic collapse under the Taliban. In addition, the U.S. will send 1 million additional COVID-19 tests to the country, which has been in a...
U.S. POLITICS・13 DAYS AGO

The spike in asylum claims and border crossings come after a Canadian policy was lifted in November that returned arrested asylum seekers back to the U.S.
CHAMPLAIN, NY・9 HOURS AGO
ABC News

President Joe Biden has faced persistent challenges as his administration worked to reform U.S. immigration policy during his first year in office. Some efforts over the past 12 months have succeeded in reversing hardline measures from the Trump era while other promises have stalled, generating harsh criticism from immigrant advocates.
PRESIDENTIAL ELECTION・2 DAYS AGO
Reuters

MEXICO CITY, Jan 20 (Reuters) - The Mexican president's bid to tighten state control of power generation drew scrutiny on Thursday during the visit of a top U.S. energy official, who faces pressure from her party to move Mexico towards a greener energy policy. Energy Secretary Jennifer Granholm, a Democrat,...
ENERGY INDUSTRY・4 DAYS AGO
CNBC

The United States announced Tuesday that it was giving more than $308 million in humanitarian aid to the Afghan people in an effort to support Afghans facing economic collapse under the new Taliban government. The White House said the administration will also send one million additional Covid-19 vaccine doses to...
U.S. POLITICS・13 DAYS AGO

Refugee Admissions into the U.S. Will Restart This Week

After a brief pause, refugee admissions to the U.S. will restart this week. The Biden Administration paused admissions, unless they met certain exceptions, as officials and refugee resettlement agencies focused on accommodating tens of thousands of Afghans who evacuated their country. A spokesperson for the state department said ‘as of January 11, there are no restrictions on refugee travel’ and admissions are expected to begin again meaning that refugees who have undergone all processing and checks will be allowed to come into the United States.
IMMIGRATION・13 DAYS AGO
Business Insider

The bipartisan letter comes after Pelosi reversed course, saying she's open to a ban. "If members want to do that, I'm OK with that," she said.
MAINE STATE・16 HOURS AGO
Newsweek

As Fulton County District Attorney Fani Willis requests a special grand jury to aid her investigation into Donald Trump's alleged election interference, the controversy clearly has the former president's attention. I can say this with confidence because Trump, who said very little about the matter for months, suddenly can't stop talking about it.
GEORGIA STATE・15 HOURS AGO
MarketWatch

In the ongoing conflict between Russia and Ukraine, Russian President Vladimir Putin’s eyes are on a bigger prize, a top expert on Putin and his country says. “This time,” writes former intelligence officer Fiona Hill in a New York Times op-ed, “Mr. Putin’s aim is bigger than closing NATO’s ‘open door’ to Ukraine and taking more territory — he wants to evict the United States from Europe. As he might put it: ‘Goodbye America. Don’t let the door hit you on the way out.’ ”
POLITICS・13 HOURS AGO
Washington Examiner

Adam Laxalt isn’t overpromising. The Nevada Republican, his party’s leading candidate for Senate in the Silver State, offered a modest menu of agenda items he plans to pursue should the GOP win a majority of seats in the chamber in the midterm elections. Topping the list? Using control of the floor, and key Senate committees, to conduct aggressive oversight of President Joe Biden and his administration. Laxalt also would encourage the Republican majority he hopes to usher in to look deeper into the Russia investigation that consumed Washington during most of former President Donald Trump’s term.
PRESIDENTIAL ELECTION・20 HOURS AGO
Business Insider

The exercise is the first time NATO has commanded a full US carrier strike group since the Cold War, the alliance said.
MILITARY・12 HOURS AGO
Business Insider

A letter from the office of Attorney General Jason Miyares sent to the Supreme Court cited a "change in Administration" in its new stance.
VIRGINIA STATE・16 HOURS AGO