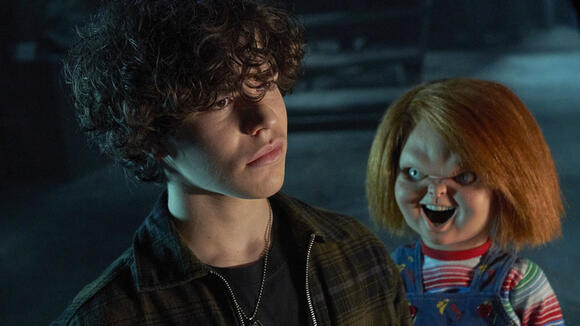 NBCUniversal has pulled the string for season two of Chucky .

The revival of the beloved horror franchise has aired jointly on USA Network and Syfy and, per NBCU, has reached 9.5 million viewers in its first season across all platforms. Season one wraps its run Tuesday at 10 p.m. on both basic cable networks. The series, which hails from Chucky creator Don Mancini, will make its streaming debut on Peacock starting Dec. 1.

“We’re thrilled to start pulling the strings on a second season of puppet mayhem with Chucky ,” said Mancini, who exec produces the series. “Many thanks to our partners at USA, Syfy and UCP for their incredible support and guidance bringing Chucky to the small screen, bigger than ever. And to the fans, Chucky sends his still-undying thanks, and a message: ‘This isn’t over, not by a long shot. You better watch your backs in 2022!’”

Picked up to series in January 2020 after being in development for a year, Chucky was originally poised to air on Syfy as part of former network chief Chris McCumber’s effort to lean harder into fan service for the cabler. With NBCUniversal’s restructuring last year, new NBCU entertainment boss Susan Rovner made the decision to share the property with USA Network as well. That strategy, which NBCU brass has done a few other times since, has paid off with the renewal as the conglomerate looks to use the breadth of its portfolio to get more eyeballs on its content.

Chucky currently is the last remaining scripted series on USA Network as the cabler, under Rovner and Frances Berwick, has shifted its focus to sports and unscripted programming. At Syfy, meanwhile, also has Resident Alien, Day of the Dead and the recently ordered Fat Vampire.

To hear more from Mancini — and other top showrunners — about the state of horror on television, listen to the TV’s Top 5 Halloween special episode here .

The finale of Hawkeye on Disney+ helped drive the show’s biggest viewing tally in the week of Dec. 20-26. Netflix’s The Witcher, meanwhile, grew in the week after its second season premiered and remained far and away the most watched title in Nielsen’s streaming rankings. Hawkeye recorded 938 million minutes of viewing time during Christmas week, the best tally of its run on Disney+ — beating out the 853 million minutes for its two-episode premiere a month earlier. It was up about 62 percent from the previous week and tied for second place among original series with Emily in Paris, whose...
TV SERIES・1 DAY AGO
The Hollywood Reporter

‘The Morning Show’ Renewed for Season 3 — With New Showrunner

The Morning Show has some news to report. The media drama starring Jennifer Aniston and Reese Witherspoon has been renewed for a third season at Apple TV+ — with its third showrunner. Charlotte Stoudt will take over as showrunner starting with season three. Kerry Ehrin, who developed The Morning Show and who served as showrunner on the first and second seasons, will serve as consultant on the third season while continuing to develop new series for Apple TV+ under her previously announced overall deal. Stoudt marks The Morning Show‘s third showrunner in as many seasons. The WGA-award winner, who has previously worked on...
TV SERIES・11 DAYS AGO
The Hollywood Reporter

‘The Great’ Renewed for Season 3 at Hulu

The Great will return for a third season on Hulu. The critically acclaimed Catherine the Great dramedy has been renewed for a 10-episode third season. The announcement was made at Disney’s Television Critics Association winter press tour session. The satiric series from showrunner Tony McNamara (The Favourite) stars Elle Fanning (Maleficent) as the longest-reigning female ruler in Russia’s history in a playfully loose take on history. The second season, which debuted in November, sees Catherine taking the throne as she struggles to bring enlightenment to the country. McNamara told The Hollywood Reporter’s TV’s Top 5 podcast in November that he didn’t have a...
TV SERIES・10 DAYS AGO
Popculture

Netflix revealed some exciting news about one of its most controversial shows on Monday. Deadline reported that Netflix renewed Emily in Paris for Season 3 and Season 4. The news comes only a few weeks after the second season of Emily in Paris premiered on the streaming service. In addition...
11 DAYS AGO

Is 'NCIS: Hawai'i' Renewed for Season 2?

NCIS: Hawaii has been a hit with fans of the long-running police procedural franchise series, but many are wondering if it's been renewed for Season 2 yet. At this time, there is no word on whether the freshman CBS series will be renewed for another season. However, it was given a full-season order in October, which can sometimes be a good indication that a series has enough viewership to merit being renewed.
TV SERIES・2 DAYS AGO
Deadline

EXCLUSIVE: Toks Olagundoye, Hari Nef and Ian Duff have been cast as series regulars in ABC drama pilot L.A. Law. They join original cast members Blair Underwood and Corbin Bernsen, who are reprising their roles as Jonathan Rollins and Arnie Becker, respectively, in the revival of the iconic Steven Bochco legal drama. Olagundoye, Hari Nef and Ian Duff all play new characters. In the pilot, written by Marc Guggenheim and Ubah Mohamed and to be directed by Anthony Hemingway, the venerable law firm of McKenzie Brackman — now named Becker Rollins — reinvents itself as a litigation firm specializing in only...
TV SERIES・2 DAYS AGO
tvseriesfinale.com

ABC has announced that “Station 19” will return for a sixth season ahead of its presentations at the Television Critics Association’s virtual press tour on Tuesday. Just one day after its Ellen Pompeo-led parent show was picked up for Season 19, the “Grey’s Anatomy” spinoff series was revived for Season 6. The showrunner of “Station 19,” Krista Vernoff, will return for the upcoming season of the broadcast drama.
TV SERIES・10 DAYS AGO

The season two trailer for Syfy’s Resident Alien confirms the new season will be weirder – and wilder – than the first. Dr. Harry Vanderspeigle’s still on Earth and determined to keep Asta safe from a possible extinction-level event planned by his fellow aliens. Harry’s still not convinced the rest of humanity deserves saving, although he does admit to being concerned he’s becoming a little too human for his own good.
TV SERIES・14 DAYS AGO
WHAS 11

'Emily In Paris' Is Renewed for Seasons 3 and 4

Emily in Paris will be back for two more seasons. On Monday, Netflix announced that it has renewed its Lily Collins-led comedy series for seasons 3 and 4. Season 2 of the Emmy-nominated series -- which follows marketing exec Emily (Collins), who's sent to Paris for her dream job -- debuted Dec. 22 on Netflix.
TV SERIES・11 DAYS AGO
fangirlish.com

Peacock Renews ‘One Of Us Is Lying’ For A Second Season

On the heels of Cartoon Network’s “Craig of the Creek” Season 4 premiere on Monday, WarnerMedia Kids & Family has already renewed the animated show for a fifth season and ordered prequel film “Craig of the Creek: The Movie” and preschool spinoff series “Jessica’s Big Little World” to expand the program into a franchise.
TV SERIES・2 DAYS AGO

How Rich Is Jason Bateman as the Final Season of ‘Ozark’ Premieres on Netflix?

As the fourth and final season of "Ozark" launches on Netflix this Friday, Jan. 21, you may be wondering how much Jason Bateman, who plays financial advisor Marty Byrde on the show, is worth....
TV SERIES・17 HOURS AGO
Primetimer

“I’m thrilled to be returning to my show, working alongside our truly incredible cast, crew, and writers, as we tell this unique and powerful story,” says Forest Whitaker, who plays crime boss Bumpy Johnson, in a statement. “I can’t wait to get back to set, and thank (Epix president) Michael Wright, Epix, ABC Signature and our dedicated fans for their support.”
TV SERIES・8 DAYS AGO
Deadline

A re-watch podcast for popular fantasy-drama series “Supernatural,” titled “Supernatural Then and Now,” is set to launch Jan. 24. Hosted by Richard Speight, Jr. and Rob Benedict (who played the angel Gabriel and God in the series), “Supernatural Then and Now” will feature behind-the-scenes stories with cast, crew and producers of “Supernatural” — from favorite memories on set to conversations about mythology in the writers’ room. “We are incredibly grateful for the support the fans of ‘Supernatural’ have given us over the years. We’re excited to be a part of this special gift to the fans that will arrive just in time...
TV SERIES・10 HOURS AGO
Newsweek

"Ozark" Season 4, Part 1 will set up the final season of the Netflix show. Part 2 will arrive on the streaming service at a later date.
TV SERIES・1 DAY AGO
Variety

Welcome to the 152nd episode of TV’s Top 5, The Hollywood Reporter’s TV podcast. Every week, hosts Lesley Goldberg (West Coast TV editor) and Daniel Fienberg (chief TV critic) break down the latest TV news with context from the business and critical sides, welcome showrunners, executives and other guests, and provide a critical guide of what to watch (or skip, as the case may be). In this week’s episode, we are joined by Downton Abbey creator Julian Fellowes to discuss his decade-long road to HBO’s The Gilded Age. Plus, we run through the week’s big headlines, look at changes at YouTube and dive deep into the latest Peak...
TV SERIES・22 HOURS AGO