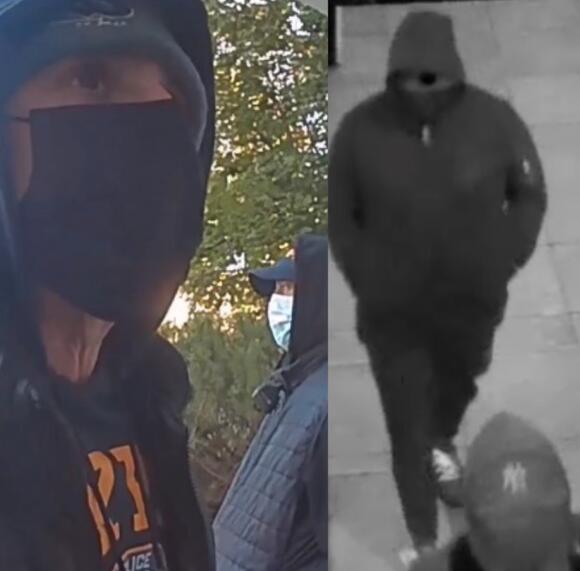 The first incident occurred back on Nov. 5 around 5:20 a.m. when cops said three individuals posing as police officers forced their way into three female victims’ apartment near University Avenue and West 175th Street in Morris Heights.

As one man acted as a lookout, authorities said three robbers shoved the 24-year-old, 60-year-old and 79-year-old victims to the floor inside the apartment, demanding money and drugs.

Cops said the robbers, described as Hispanic males who wore dark-colored clothing, removed a safe from the residence and fled the scene in an unknown direction.

In another police impersonation scheme on Nov. 9 at around 8:05 a.m., the NYPD said two men posed as police officers and displayed a handgun inside a residence on Country Club Road and Polo Race in Country Club and tied up a 50-year-old man and a 40-year-old woman.

Authorities said the suspects fled the scene inside of a white BMW SUV with around $30,000 in cash and $100,000 worth of jewelry. The car has since been recovered.

The suspects are described as white men in their 50s who wore surgical masks and sweatshirts with the NYPD logo on them.

Police did not say if the two incidents are connected.

Anyone with information on both robberies is asked to call the NYPD's Crime Stoppers Hotline at 1-800-577-TIPS.

Burglary suspect fatally shot by police after confrontation in the Bronx: NYPD

A burglary suspect was fatally shot by police during a confrontation in the Bronx on Thursday afternoon, officials said.
BRONX, NY・13 HOURS AGO
1010WINS

VIDEO: 2 suspects sought in attacks on seniors in Chelsea

Shocking video released by the NYPD Thursday morning shows two thieves knock a man unconscious on a Queens sidewalk before rifling through his belongings.
QUEENS, NY・15 HOURS AGO
1010WINS

An NYPD detective was shot and injured as police served a drug-related warrant at a Staten Island home on Thursday morning—the third NYPD member shot this month.
STATEN ISLAND, NY・19 HOURS AGO

Person shot by police during confrontation in the Bronx: NYPD

A suspect was shot by police during a confrontation in the Bronx on Thursday afternoon, officials said.
NEW YORK CITY, NY・14 HOURS AGO
1010WINS

The NYPD released a new photo on Thursday of a suspect wanted in connection with the shooting of an 18-year-old man who was targeted aboard a subway train in the Bronx last week.
BRONX, NY・10 HOURS AGO
1010WINS

Authorities are searching for two thieves who posed as good Samaritans before tasing and robbing a victim of his car keys in Brooklyn early Tuesday morning.
BROOKLYN, NY・18 HOURS AGO
1010WINS

A baby was shot at least once in the Bronx on Wednesday night, the NYPD said.
NEW YORK CITY, NY・1 DAY AGO

The NYPD released video Thursday of a suspect and a vehicle they’re searching for a day after an 11-month-old girl was shot in the face by a stray bullet in the Bronx.
NEW YORK CITY, NY・21 HOURS AGO
1010WINS

Authorities are searching for a mugger who they said attacked a man in the vestibule of his Manhattan apartment building in the afternoon on New Year’s Eve.
MANHATTAN, NY・1 DAY AGO
1010WINS

The NYPD confirmed the officer was shot in the leg near Lorillard Place and Third Avenue in the borough’s Belmont neighborhood Tuesday evening.
BRONX, NY・1 DAY AGO
1010WINS

11-month-old girl hospitalized after being shot in the Bronx; suspect sought

An 11-month-old girl is hospitalized after being shot in the face in the Bronx Wednesday night, police said.
NEW YORK CITY, NY・1 DAY AGO

Video released by the NYPD on Wednesday shows the victim being shoved to the sidewalk at E. 86th Street and Henderson Place around 12:30 a.m. on Dec. 25.
NEW YORK CITY, NY・1 DAY AGO
1010WINS

An off-duty NYPD officer was arrested after he allegedly punched a drunk driver repeatedly and hurled racist insults at him during a confrontation in Brooklyn over the weekend, police said Monday.
BROOKLYN, NY・2 DAYS AGO
1010WINS

Cops said the suspect made homophobic and hateful remarks regarding the person’s country of origin before punching them multiple times and taking out a knife.
BRONX, NY・2 DAYS AGO
1010WINS

The NYPD is looking to identify a knife-wielding man sought in connection to a slashing that happened during a fight on a Bronx street over the weekend, authorities said.
BRONX, NY・2 DAYS AGO
1010WINS

Boy, 11, critical after being struck by vehicle in Queens; driver had suspended license: NYPD

Police said the incident happened around 3:30 p.m. at Rockaway and Lefferts boulevards in South Ozone Park. The driver is in police custody.
QUEENS, NY・8 HOURS AGO
1010WINS

The NYPD released video footage of a man they said posed as a food delivery worker and fatally shot a man on the Lower East Side last week, according to authorities.
NEW YORK CITY, NY・3 DAYS AGO
1010WINS

NYPD veteran is 64th member to die of COVID-19: officials

Upon arrival, cops made contact with the 24-year-old man on the third floor, which resulted in the police-involved shooting.
YONKERS, NY・3 DAYS AGO