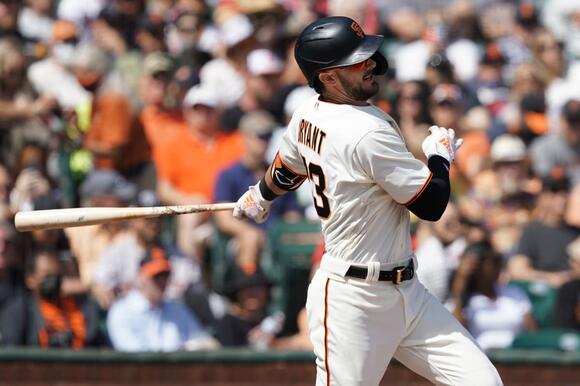 This morning, Jon Morosi linked the Phillies with former MVP Kris Bryant. In desperate need of a left fielder and third baseman, Bryant would be a major acquisition.

It’s been eight years since 2013 and Dominic Brown that the Phillies last received more than 2 WAR from a third baseman or left fielder. Considering Alec Bohm’s recent struggles and Andrew McCutchen’s departure in free agency, that trend looks likely to continue.

Monday morning, Jon Morosi of MLB.COM tweeted that both the Mariners and Phillies have been “linked to Kris Bryant in the last several days.” The utility outfielder would be a major prize for a Phillies team that lacks a consistent starter at both third base and left field.

Bryant, who won Rookie of the Year in 2015 and MVP in 2016, has been a remarkably consistent producer nearly his entire career. Excluding 2020’s shortened season, Bryant’s OPS has never dipped below .834 in a single season and outside of a minor injury in 2020 and a 2018 shoulder injury, he’s never seen the injured list.

However, the Phillies may be hesitant to dish out another large contract considering the litany of high AAV multi-year deals already on the books. According to MLBTradeRumors a Bryant contract might look something like 6 years/$160 million, while Ben Clemens of Fangraphs predicts , 8 years/$200 million.

Though the pre-lockout free agent scene may seem gloomy for the Phillies thus far, one glimmer of hope for fans could be the Mariners acquisition of 2021 AL Cy Young winner Robbie Ray. Costing a clean $115 million over five seasons the Mariners added $23 million to their 2022 payroll Monday afternoon, and therefore may be reluctant to add another big salary to their budget so soon.

Should the Phillies sign Bryant this offseason, not only would his positional flexibility be valuable, but so to would his on-base ability. Bryant’s career OBP is .376 and since Jimmy Rollins, the Phillies have struggled to find a consistent lead-off hitter.

Though Bryant’s bat would play just as well in the middle of the order due to his power, a dependable lead-off man would work wonders for run production, especially coming off a season in which Odubel Herrera’s .310 OBP saw a bulk of time in the lead-off spot.

If the Phillies are afraid to chase Bryant due to his steep price tag, cheaper left field options include Nick Castellanos, Kyle Schwarber, and Michael Conforto, any of whom would provide slightly worse defense but also a steady top of the order bat.

New York Yankees general manager Brian Cashman is expected to wheel and deal following the MLB lockout. And while third base isn’t Cashman’s top priority, MLB Trade Rumors pitched a scenario which has the Yankees landing slugger Kris Bryant. DJ LeMahieu is the best fit for third base...
MLB・2 DAYS AGO
Inside The Phillies

Ranger Suárez's success in 2021 doesn't appear to be an anomaly, so the Phillies must exploit that. If they want make the playoffs in 2022, the starting rotation will need to rely heavily on Suárez.
NFL・20 HOURS AGO
Inside The Phillies

The 2021 Phillies were a top heavy team, both in terms of production and salary. Given that level of top talent, which players from last year's team have a shot at reaching Cooperstown?
MLB・1 DAY AGO
Yardbarker

After letting Tyler Wade and Brett Gardner go this off-season, the New York Yankees need a new utilityman to fill the void. While they could go with someone cheaper and more cost-efficient, it is possible they view kris Bryant as a potential solution at multiple positions, considering his ability to play third base and in the outfield.
MLB・2 DAYS AGO

This Day in Phillies History: January 18

This day in Phillies history sees a Hall of Fame induction and the introduction of a broadcasting legend.
MLB・22 HOURS AGO
philliesnation.com

While the Phillies haven’t been shy in attempting to pluck talent from the Washington Nationals in recent years, quite a few former Philadelphia employees have landed jobs with the division rivals this offseason. The latest is former infielder Wilson Valdéz, who the Nationals announced as the infield coach for...
MLB・1 DAY AGO
Inside The Phillies

The Phillies began the International Amateur Free Agent signing period with a blast, nabbing 14 young, Latin American prospects in the first days alone.
NFL・2 DAYS AGO
Inside The Phillies

Could This Phillies Trade Proposal Come to Fruition?

This hypothetical trade proposal could take the Philadelphia Phillies to the next level.
NFL・1 DAY AGO

It’s not hard to find a spot on the Cubs roster for Kris Bryant. Patrick Wisdom, despite his monster power showing down the stretch, may or may not be a long-term solution. In the outfield, you’re taking a roll-the-dice approach, hoping for more consistency from Ian Happ, a bounce back from Jason Heyward and simply for someone to seize the opportunity in left.
MLB・2 DAYS AGO
Over the Monster

LeLacheur Park, the home of the Lowell Spinners is in need of a $30 million upgrade, which would throw a wrench in any potential plan to move a Red Sox affiliate back to Lowell. (Kevin Reichard; Ballpark Digest) One of the most talented pitchers on the free-agent market is closer...
MLB・2 DAYS AGO
Inside The Phillies

Jonathan Papelbon joined Rob Bradford on the Live BP podcast to make it clear he has no intention of following in the footsteps of his former teammate Jon Lester, saying he will never announce his retirement.
MLB・2 DAYS AGO
USA TODAY

The futures odds are out for the 2022 World Series, and while a lot can change as the MLB lockout rolls on and eventually gets resolved, the Yankees and Mets are both, as of now, among the favorites.
MLB・1 DAY AGO
Audacy

Greg Maddux recalls the shocking twist that led him to sign with the Atlanta Braves over the New York Yankees during his free agency in 1992.
MLB・20 HOURS AGO
Inside The Dodgers

David Vassegh of AM570's ranked righty Zack Greinke as the Dodgers best free-agent signing of recent memory.
MLB・1 DAY AGO
Inside The Dodgers

The former Dodgers slugger was a fresh of breath air for the Atlanta Braves.
MLB・18 HOURS AGO
Audacy

Jonathan Papelbon joined WEEI’s Live BP Show and spoke about the backstory behind why he and Bryce Harper went at it in the Washington Nationals dugout in 2015.
MLB・2 DAYS AGO