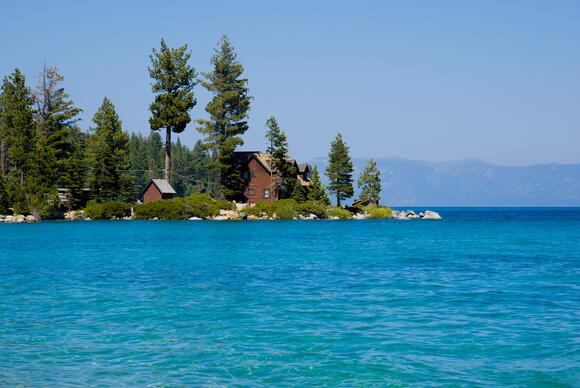 LAKE TAHOE, Calif. (KNX) — New data shows the sale of second or "vacation" homes are up more than 50% since pre-pandemic times — many in the Lake Tahoe and Truckee areas, according to Redfin.

The California Association of Realtors (C.A.R.) found that second-home sales jumped 54% in 2021, with an estimated 35,000 vacation and second homes expected to be sold this year (about 6.5% of the state's sales).

In Northern California's Tahoe and Truckee areas, the demand is causing a serious shortage, according to Coldwell Banker Real Estate Agent Christina Soloski.

"We have much more demand for people to live here than the inventory supply," Soloski said in an interview with KCBS, explaining that inventory has dropped 90% since pre-COVID times.

That doesn't mean you wont' get a house though, she said — as long as you prepare correctly.

"There’s a difference between pre-qualified and pre-approved," she said. "In pre-approval your lender will basically tell you you can make an offer that’s not contingent upon your loan."

The ports of Los Angeles and Long Beach announced today that implementation of a fee on companies whose import containers linger at marine terminals will be delayed again, with it now potentially taking effect, if necessary, next Friday.
LOS ANGELES, CA・15 HOURS AGO
KNX 1070 News Radio

Consumers wait about 3 seconds before ditching a website: report

Think about it, how long do you give a website to load before you give up and close the page? The average is about three seconds, according to a recent survey.
INTERNET・11 HOURS AGO
KNX 1070 News Radio

The Queen Mary closes to public for $5M in ‘critical repairs’

Fencing is going up in Long Beach, as the city prepares to begin the first phase of its $5 million repair project on The Queen Mary. The renovations come as the assumes control of the ship for the first time in 40 years.
LONG BEACH, CA・17 HOURS AGO

A Sacramento judge decided earlier this week to delay enforcement of part of a new livestock welfare law that may cause significant price hikes and shortages for bacon and other pork products.
SACRAMENTO, CA・2 DAYS AGO
KNX 1070 News Radio

91 Freeway closure in Corona rescheduled for this weekend

A planned closure of the 91 Freeway canceled last weekend due to inclimate weather has been rescheduled for this weekend, ending 5 a.m. Monday, Jan. 31.
CORONA, CA・1 DAY AGO
KNX 1070 News Radio

Declining COVID hospitalizations indicate that Los Angeles County is past the peak of Omicron variant transmission, but health experts say Angelenos are still not out of the woods when it comes to COVID-19.
LOS ANGELES COUNTY, CA・1 DAY AGO

The number of “unprovoked” shark attacks in the United States jumped 42% from 2020 to 2021, according to the Florida Museum, which tallied a total of 73 unprovoked attacks worldwide — with more than half reported in the U.S.
LOS ANGELES, CA・3 DAYS AGO