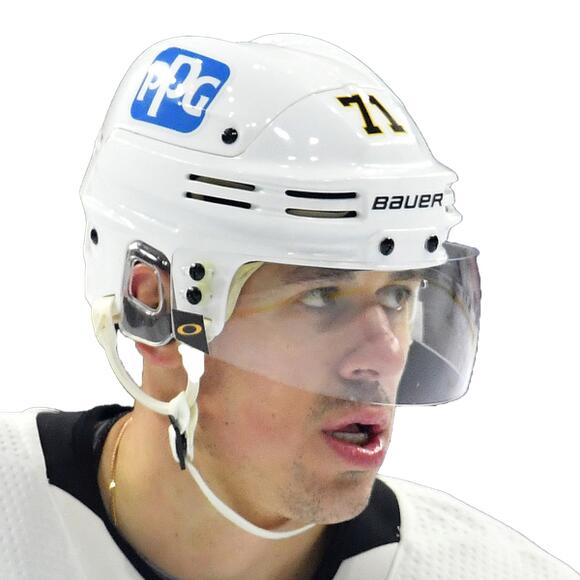 PITTSBURGH (93.7 The Fan) – Pens alternate captain Evgeni Malkin joined the team on the ice for the first time this season on Monday before playing in Calgary.

Malkin participated in a full practice, wearing a non-contact jersey.

“Geno is at the next stage of his rehab process,” said Pens head coach Mike Sullivan.  “Where our medical team believes he’s ready to have more players around him and participate in a non-contact fashion.  We are excited about that step, it’s real encouraging.”

“We have a rough timeframe.  I think it’s real significant that he’s taking this step because it suggests that he’s that much closer.  The final step would be participation in a full capacity.”

“Certainly, the fact that he’s joining the team, around other players, participating in a controlled circumstance is a big step for him.  We are real encouraged with the progress he is making.”

“He looked pretty good to me,” said forward Brian Boyle.  “It was nice to see him out.  I haven’t had the chance to be out there with him yet.  It was fun watching him and see what he can do, especially while he’s still rehabbing.”

“We knew he made the trip,” said defenseman Kris Letang.  “Obviously watching him skate on his own, we knew he was close.  We are always happy to see a teammate back in practice after a long recovery like this.”

“We know how it feels to be left alone at home and not making the trips.  It was cool having him with us.  I’m pretty sure he was happy to be around a lot of guys.”

Bryan Rust put on the injured list on Sunday with Drew O’Connor called up.  Sullivan confirmed it’s a lower-body injury and his status is week-to-week.

It’s been in the news for the last couple of weeks, the Pens officially announcing they have entered into an agreement to sell the team to the Fenway Sports Group with Mario Lemieux and Ron Burkle staying on as part of the ownership team.

“We are real excited about the opportunity,” Sullivan said Monday.  “(GM Ron) Hextall and (President Brian) Burke addressed our players and our team this morning with respect to it.  I know I had a short conversation with the owners before I went on the ice for practice.  We are excited for the opportunity.”

“These guys have a proven track record.  I think they are fans, first and foremost and I think they are in it for the long haul.  I think they understand it and I’m looking forward to the opportunity to learn from those guys and the experience they can bring with some of their other sports.”

“They are joining an ownership group in Ron and Mario that has provided such great leadership for our team in all the years that they’ve owned it.  Their success speaks for itself with the amount of Stanley Cups they’ve won as owners.  I think it’s a win-win for everyone involved.”

“The Fenway Sports Group is going to add another level of leadership and resources to help this team continue to have success.”

“This is a business transaction,” Boyle said.  “It’s our team and we go on the ice and play.  But it doesn’t necessarily involve us.  We are in Pittsburgh.  We play for the Penguins.  We put the jersey on and go out and do what the coach tells us to do.”

“It’s the business side of the game,” Letang said.  “We are a little bit on the outside with that.  When you hear that Mario and Ron will stay with us and still be part of ownership.  It’s a relief because I had the chance to spend a lot of time with them, grow a relationship with them.  To have them still with us, it’s a big relief.”

“It was a big opportunity.  They probably hand-picked the buyers to make sure the same mentality was going to be in place, a winning culture.  I’m pretty sure it’s a good business move too, I’m happy for them.”

“It’s great, the team where it used to be in 1999 and early 2000, they made a great investment.  It was a risky one, but it paid off.  Now we have three Stanley Cups, pretty happy for them.  Glad they are staying on the boat.”

Vegas Golden Knights winger Reilly Smith is one of the hottest names leading up to the NHL trade deadline. With
NHL・2 DAYS AGO
San Diego Union-Tribune

David Quinn is getting a second chance at the Olympics as the coach of the U.S. men's hockey team
HOCKEY・2 DAYS AGO
CBS LA

NEW YORK (AP) — Adam Fox scored the deciding goal in the sixth round of a shootout and the New York Rangers beat the Los Angeles Kings 3-2 on Monday night for their ninth win in 12 games. Chris Kreider got his NHL-leading 30th goal, Barclay Goodrow also scored and Artemi Panarin had two assists as New York won its fifth straight at home. Igor Shesterkin stopped 28 shots to pick up his 20th win of the season. Blake Lizotte and Alex Iafallo scored in the second period for Los Angeles. Jonathan Quick stopped 34 shots as the Kings lost for the...
NHL・2 DAYS AGO
USA TODAY

P.K. Subban said he felt accountability to call out recent racist actions in hockey because he has established a platform to inspire better behavior.
NHL・2 DAYS AGO

He said it initially it was a head-shot and after having time to watch it, Pens head coach Mike Sullivan questions why the league won’t punish the hit on Teddy Blueger
NHL・1 DAY AGO
Sportsnaut

If you’re looking for fantasy hockey tips for the games ahead, you have come to the right place. As the
NHL・1 DAY AGO
Itemlive.com

The Pittsburgh Penguins are proving that it’s never wise to count them out. Not in games. Not in the chase
NHL・2 DAYS AGO

BOSTON (CBS) — The Bruins will be a little shorthanded along the blue line as they wrap up a seven-game homestand. Defenseman Matt Grzelcyk will be sidelined on Monday night when the B’s welcome the Anaheim Ducks to TD Garden. Grzelcyk briefly left Saturday’s win over the Jets after being sent into the boards by Winnipeg’s Pierre-Luc Duboius in the first period. He did return to the game and finished with 13:35 of ice time, and was credited with an assist on David Pastrnak’s game-winning goal in the third period. Head coach Bruce Cassidy was cautiously optimistic that Grzelcyk avoided a serious...
NHL・2 DAYS AGO
Sportsnaut

Mason Marchment scored twice and added an assist, Carter Verhaeghe netted the go-ahead goal in the second period and the
NHL・1 DAY AGO
Sportsnaut

Jeff Carter still has plenty of hockey in front of him
NHL・10 HOURS AGO
xflnewsroom.com

Yesterday the USFL officially announced Birmingham, AL as their HQ in 2022. The deal will see the city host all eight teams for the first season, with as many as four in 2023. From there, all teams would report to their respective cities. Although this news wasn’t shocking for any...
BIRMINGHAM, AL・12 HOURS AGO
Sportsnaut

The Seattle Kraken’s nickname does not mean sacrificial lamb in some obscure language, and the Pittsburgh Penguins probably shouldn’t assume
NHL・12 HOURS AGO