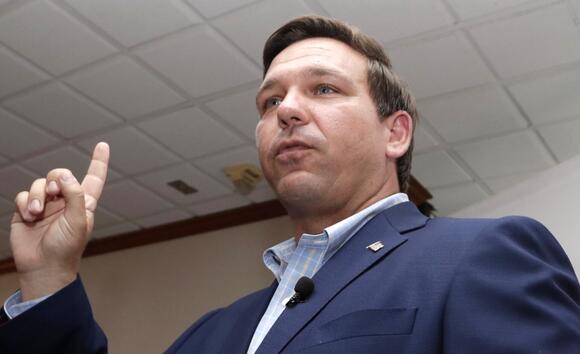 F our states with Republican legislatures have changed their laws to permit those who lose their jobs over vaccine mandates to still collect unemployment benefits.

The governors of Florida, Iowa, Tennessee, and Kansas have all signed legislation that allows workers who are fired for their refusal to be vaccinated or who quit over vaccine mandates to collect unemployment. The changes are symbolic of Republican resistance across the country to President Joe Biden’s own federal mandates and could end up taking effect in other GOP-held states.

Iowa was the first state to pass such a bill in late October. The legislation allows for medical and religious exemptions for workers and codifies their ability to collect benefits if they are terminated for refusing to be inoculated. Republican Gov. Kim Reynolds, who is also suing Biden over the mandates, said at the time that “no Iowan should be forced to lose their job or livelihood over the COVID-19 vaccine.”

Florida’s Gov. Ron DeSantis, a possible 2024 Republican presidential contender and regular critic of Biden, signed legislation this month that prohibits private businesses from enforcing vaccine mandates unless they provide a wide array of exemptions. The new law also imposes fines of up to $50,000 for companies of more than 100 employees that unduly fire an employee under the new guidance.

Christina Pushaw, the governor’s press secretary, explained to the Washington Examiner that, under Florida law, a person is disqualified from receiving unemployment assistance if they are fired for misconduct — including violations of the company’s rules. But if the employer’s rules are unlawful, the person who was terminated could still receive assistance.

“In other words, if an employer has a policy that is unlawful (such as a COVID vaccine mandate) an employee who is terminated for refusing to comply with the mandate would still be eligible for Reemployment Assistance benefits, which may not be available to workers who were fired for ‘misconduct,’” she said in a statement.

When DeSantis signed the new law, he called it the “strongest piece of legislation that’s been enacted anywhere in the country in this regard.”

Also this month, Tennessee’s Republican Gov. Bill Lee approved changes to state law that restricts businesses from mandating COVID-19 vaccines. In addition to prohibiting public schools from implementing mask requirements except for extreme surges, the new legislation allows those who quit their jobs because of vaccination requirements to collect unemployment.

Iowa is the only one of the four states that has a Democratic governor. Gov. Laura Kelly signed the legislation after a period of relative uncertainty . Kansas Attorney General Derek Schmidt, who is running against Kelly for governor next year, has pushed back on the notion of vaccine mandates, putting further pressure on the Democrat to sign the legal changes.

“Laura Kelly spent months sitting idle and silent as her party bosses waged war on everyday Kansans’ livelihoods and personal freedom. It wasn’t until she saw Democrats rejected in Virginia that she suddenly chose to feign disapproval of mandates,” a spokesperson for the Republican Governors Association told the Washington Examiner .

“Signing the bills championed by Republican leadership is the least she could do on her way out of office,” the spokesperson added.

In September, Biden announced that businesses with more than 100 employees must institute a COVID-19 vaccine mandate , although they have the option to provide weekly testing results in lieu of inoculation. The compliance date was Jan. 4., although the U.S. Court of Appeals for the 5th Circuit recently moved to block the order. That pause was later reaffirmed .

Several states are also suing the administration over the edicts, which include requiring all federal workers and businesses with federal contracts to have their employees vaccinated, although those orders do not include a test-out option.

Despite the court hurdles, the White House has said it is confident that the mandates will pass legal muster.

Well consider this all the nonessential workers got a full year of unemployment, while all the essential workers had to work without the vaccine available. Now they push a vaccine that we still don’t know the full list of side effects and expect everyone to just come on board with no questions. So why not give us essential worker a year off too huh?

Let the vaccinated do all the work...they have demonstrated a slave mentality and a very low IQ when they got the experimental drug.and they turned evil when they bullied the smarter people to get the shot. Nothing lost if they are worked to death, and they do not need to be paid when Biden's hyperinflation makes their paychecks meaningless. Jump to it slaves!

Congressional Republicans had a wealth of topics to criticize as they commemorated the one-year anniversary of President Joe Biden’s inauguration with a festival of events, with energy bubbling as they eye taking back the House in 2022. “We've got an economy that is damaged. You got cities, the streets,...
PRESIDENTIAL ELECTION・20 HOURS AGO
WashingtonExaminer

President Joe Biden has shed his reluctance to alter Senate rules on the filibuster as his political standing has diminished and his legislative agenda has stalled. Biden began to move away from his support for the 60-vote threshold to end debate on most legislation this fall after insisting that abolishing the filibuster would lead to "chaos" as recently as July. But the intensity with which he has advocated changing the rules of a congressional chamber in which he served for 36 years has increased in the new year.
PRESIDENTIAL ELECTION・14 HOURS AGO
WashingtonExaminer

As President Joe Biden marked the first anniversary of his presidency this week, congressional Republicans argued his first year in office was a failure, and they are poised to make significant gains in Congress in the midterm elections as a result. “You can't give it anything but a failing grade,”...
PRESIDENTIAL ELECTION・20 HOURS AGO
Wyoming News

(The Center Square) – President Joe Biden’s aggressive push to federalize election law is likely over after proposed legislation failed to pass the U.S. Senate and a second vote to end the filibuster also failed. Sen. Bernie Sanders, I-Vermont, blasted Democrats from the Senate floor Thursday night, saying they should have overturned the filibuster rule to pass the legislation. “I can understand Republicans [not supporting the bill], but this I...
PRESIDENTIAL ELECTION・19 HOURS AGO

A federal judge in Texas granted Friday a nationwide preliminary injunction against President Biden’s Executive Order mandating that all federal workers consent to be vaccinated against Covid-19 or else face termination. The order poses a substantial threat of irreparable harm to the “liberty interests of employees who must choose...
TEXAS STATE・1 HOUR AGO
Reuters

Jan 21 (Reuters) - A judge in Texas ruled on Friday that President Joe Biden could not require federal employees to be vaccinated against the coronavirus and blocked the U.S. government from disciplining employees who failed to comply. Biden issued an order requiring about 3.5 million workers to get vaccinated...
TEXAS STATE・14 MINUTES AGO
Newsweek

The White House expands availability of COVID test, N95 masks ahead of Biden's press conference to mark one year in office. Follow Newsweek for the latest.
CONGRESS & COURTS・2 DAYS AGO
The Independent

Treasury Secretary Janet Yellen told a gathering of America’s mayors on Wednesday that the Biden administration’s coronavirus relief bill was like a vaccine preventing catastrophic economic damage that could have returned the nation to the financial woes seen at the beginning of the pandemic.President Joe Biden s $1.9 trillion American Rescue Plan “acted like a vaccine for the American economy, protecting our recovery from the possibility of new variants," Yellen said at the U.S. Conference of Mayors’ 90th winter meeting in downtown Washington "The protection wasn’t complete, but it was very strong," Yellen said. “It prevented communities from suffering...
HOMELESS・2 DAYS AGO

Washington — The Supreme Court on Thursday blocked the Biden administration's vaccine-or-test rule for businesses with at least 100 workers, but granted a separate request from the Biden administration to allow its vaccine mandate for health care workers to take effect. In an unsigned opinion on the rule from...
CONGRESS & COURTS・7 DAYS AGO
The Southern Maryland Chronicle

The Supreme Court on Thursday blocked a key Biden administration covid-19 initiative — putting a stop, for now, to a rule requiring businesses with more than 100 workers to either mandate that employees be vaccinated against covid or wear masks and undergo weekly testing. The rule, which covers an estimated 80 million workers, took effect earlier this week.
CONGRESS & COURTS・7 DAYS AGO
Axios

One in three states has already prohibited COVID-19 vaccine mandates in schools — even before the FDA has fully approved vaccines for children. Why it matters: The Biden administration hoped to rely on schools as a "trusted messenger" in support of coronavirus vaccines, but schools have become a political battleground as the Omicron variant roars across the U.S.
HEALTH・12 DAYS AGO
Vox

Benjamin Flowers is Ohio’s solicitor general, and he was supposed to be at the Supreme Court on Friday to ask the justices to nullify a Biden administration rule requiring most workers to either be vaccinated against Covid-19 or to be regularly tested for the disease. But Flowers had to...
CONGRESS & COURTS・13 DAYS AGO

A $1.8T Build Back Better compromise Manchin offered the White House in December is off the table. "We'll just start with a clean sheet of paper."
PRESIDENTIAL ELECTION・22 HOURS AGO
Arizona Mirror

WASHINGTON — Every Republican in the U.S. Senate and two Democrats on Wednesday night rejected a proposed change in the filibuster to pass voting rights legislation, dealing a major blow to attempts in Congress to counter restrictive voting laws passed in the states. In a 48-52 vote, two Democrats — Sens. Kyrsten Sinema of Arizona […] The post Sinema joins Republicans to block a change in the filibuster for voting rights bills appeared first on Arizona Mirror.
PRESIDENTIAL ELECTION・1 DAY AGO
AFP

US senators dealt a death blow Wednesday to President Joe Biden's push to defend voting rights against what Democrats frame as an all-out assault by conservative states targeting racial minorities. Faced with a blockade from Republicans complaining of federal overreach, the ruling Democrats were unable to push through the Freedom to Vote Act and John Lewis Voting Rights Advancement Act passed by the House of Representatives last week. "I am profoundly disappointed that the Senate has failed to stand up for our democracy. I am disappointed -- but I am not deterred," Biden said in a statement posted to social media immediately after the vote. "We will continue to advance necessary legislation and push for Senate procedural changes that will protect the fundamental right to vote."
PRESIDENTIAL ELECTION・1 DAY AGO
Newsweek

Manchin Says His Decisions Based on Rural People He Represents, Not Washington Democrats

Casper Star-Tribune CASPER – A reworked version of a bill that aims to create protections for unvaccinated Wyoming residents is headed to next month’s legislative session. House Bill 32 would require health care facilities, governmental entities and providers of “essential services” to offer accommodations to people who are unable or unwilling to provide proof of immunization. It would also outlaw COVID-19 vaccine requirements in Wyoming schools for the next five...
CASPER, WY・20 HOURS AGO
WashingtonExaminer

Officials with the Arkansas Department of Human Services (DHS) said they need an extra $400 million to cover rising Medicaid costs because of the COVID-19 pandemic. The request was made Wednesday during a meeting of the Joint Budget Committee. DHS Secretary Cindy Gillespie said the department cannot kick off anyone...
ARKANSAS STATE・18 HOURS AGO
WashingtonExaminer

Dozens of Democrats are calling on President Joe Biden to revamp the military’s drone program following a litany of highly publicized failures in which civilians have been killed.
PRESIDENTIAL ELECTION・2 HOURS AGO