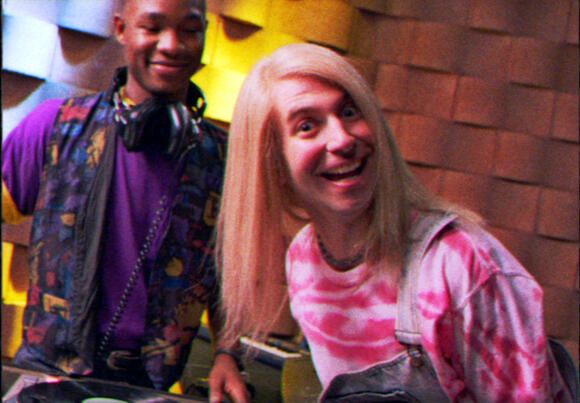 Netflix debuted a trailer for “ Saturday Morning All Star Hits !,” which premieres Dec. 10.

The series is a live action and animation hybrid mock starring Kyle Mooney as both Skip and Treybor, twin brothers who serve as hosts of a mock TV special. Over eight episodes, Skip and Treybor celebrate ’80s and ’90s television with a focus on the Saturday morning cartoon experience. The trailer features the fictional news story of the disappearance of actors Lottie Wolfe (Geraldine Viswanathan) and Sean Benjamin (Dylan Sprouse) as well as a mock music video by Johnny Rash (also Mooney) called “Awww Shut Up.”

Watch the trailer below.

ABC announced that the unscripted courtroom comedy series “Judge Steve Harvey” will premiere Jan. 4 at 8 p.m. The episodes will also be available on Hulu the day following their premieres. In the series, Steve Harvey will help people with their real-life conflicts, ranging from family disputes to unpaid bets to souring friendships, basing his courtroom on his own life experiences as well as common sense. “Judge Steve Harvey” is executive produced by Harvey, Brandon Williams, Jesse Ignjatovic, Evan Prager, Jared Morell and Myeshia Mizuno. Den of Thieves produced in association with Walt Disney Television’s newly formed alternative unit.

Alessia Cara and Pistol Annies will appear on “The Tonight Show Starring Jimmy Fallon.” Taylor Swift, Aisling Bea and Elmo Lovano will be on “Late Night With Seth Meyers.” “The Late Show with Stephen Colbert” will feature Peter Jackson and Chelsea Cutler.

You can expect to see the next installment of Daniel Craig as Private Detective Benoit Blanc in “Knives Out 2” streaming on Netflix this fall. Variety has learned exclusively that writer and director Rian Johnson’s hotly-anticipated sequel is expected to release in theaters and the streaming platform in the last quarter of 2022. In addition, the film is expected to also make a festival run before its release, although it’s unknown which ones it’s expected to debut at. With this added layer, we can expect the sequel to be a possible awards hopeful for Netflix next year. The streamer is expected...
MOVIES・22 HOURS AGO
Variety

The Amazon Prime Video competition series “LOL: Last One Laughing” will launch a Canadian edition Feb. 18. “Last One Laughing Canada” competitors include Caroline Rhea, Dave Foley, Debra DiGiovanni, Jon Lajoie, Tom Green, Colin Mochrie, Mae Martin, Brandon Ash Mohammed, Andrew Phung and K. Trevor Wilson. Hosted by Jay Baruchel, the six-part series follows the 10 comedians as they try to eliminate others by making each other laugh (through stand-up, musical performance, improvisational and more), while not laughing themselves. The comedian who outlasts their competitors wins the grand prize of $100,000 for their charity of choice. Executive Producers are John Brunton, Erin...
TV SERIES・8 DAYS AGO
Variety

From Awkwafina to the Lonely Island: Who Should Host the Oscars?

It’s do-or-die time for the Oscars to recapture the glory days of the ceremony when more than 50 million people were watching emcees like Billy Crystal, Chris Rock and the foursome of 1983 that included Walter Matthau, Liza Minnelli, Dudley Moore and Richard Pryor. With Will Packer producing the telecast for the first time, he’s said to have an exciting vision that can only be executed with a fresh, new host. So, who should the Academy tap? WHO?: Selena Gomez, Steve Martin and Martin Short WHY?: Hulu’s “Only Murders in the Building” stars bridge all generations that the Academy needs to elevate...
CELEBRITIES・2 DAYS AGO
Deadline

ABC News is planning a fresh podcast push, launching new series and adapting Good Morning America for audio. Beginning today, the first two hours of GMA will be available as podcasts, allowing for more portable consumption of the program, which is anchored by Robin Roberts, George Stephanopoulos and Michael Strahan. In addition, ABC Audio will launch a new entertainment podcast, Close Up, led by journalist Kelley Carter. The podcast will break down entertainment news, and feature interviews with stars, directors and other entertainment industry notables. Close Up will debut Feb. 9, the day after the 2022 Oscar nominations are announced. Close Up and...
WORLD・2 DAYS AGO
IndieWire

Beloved stand-up comedian, Primetime Emmy winner, actor, and game show host Louie Anderson has died at the age of 68 after battling cancer. Anderson was fighting diffuse large B cell lymphoma and was hospitalized earlier this week. He died in Las Vegas. His publicist Glenn Schwartz confirmed the news. Knowing for his fleet-footed and nimble comedic style, Anderson won a Primetime Emmy Award for Outstanding Supporting Actor in a Comedy Series in 2016 for “Baskets” for his role as Christine Baskets, the mother of Chip and Dale (twins both played by Zach Galifianakis). The actor was nominated in the category across...
CELEBRITIES・1 DAY AGO
The Hollywood Reporter

How Pamela Fryman Is Stewarding the Traditional Sitcom

Pamela Fryman didn’t take it as a bad omen when the 1994 Northridge earthquake postponed plans to direct her first episode of primetime TV. It was a few weeks later, when production finally resumed on the NBC sitcom Café Americain, that she began feeling superstitious. “We were waiting for the audience to file in when they told us the show had been canceled,” recalls Fryman during an hourlong Zoom conversation from her home on the westside of Los Angeles in early January. Then 34, with daytime drama Santa Barbara her only directing credit, Fryman was tasked with rallying star Valerie Bertinelli...
LOS ANGELES, CA・23 HOURS AGO
film-book.com

In today’s podcast roundup, Apple TV Plus delves into the lives and careers of pop-culture icons Siegfried & Roy; “SNL” alums Dana Carvey and David Spade host a comedy talk show from Cadence13; Spotify’s The Ringer cooks up a new feed for foodies; and more. DATES Apple TV Plus debuted “Wild Things: Siegfried & Roy,” a docu-series that promises to reveal untold stories of the world-famous magic performers and animal trainers, with the first two episodes of eight-part podcast on Jan. 12 on Apple Podcasts, Spotify and other podcasting platforms. Over the course of nearly half a century, Siegfried & Roy performed...
TV & VIDEOS・10 DAYS AGO
The Hollywood Reporter

Populating Will Arnett’s latest comedy was a project in and of itself. Arnett and his Sony-based Electric Ave. banner had secured the rights to adapt the BAFTA Award-winning BBC Three series Murder in Successville, and now he needed a cadre of celebrity guest stars who’d be willing to improv their way through his spin on the murder mystery. His pitch to prospective talent was simple, if a tad daunting: “We’re basically making Law & Order without a script,” Arnett recalls saying, explaining how he’d be playing the lead detective and they’d be his homicide trainee, and together they’d interview suspects and...
TV & VIDEOS・8 DAYS AGO
orcasound.com

Premieres on Friday, January 14th. Quote from ARCHIVE 81 Showrunner, Executive Producer and Writer Rebecca Sonnenshine: “I’m obsessed with mystery box shows, the kind that leads us down a rabbit hole into a strange, dark world. Archive 81 is a character-driven, deeply emotional story about the nature of art, faith, and the search for identity — all wrapped up in a frayed blanket of existential dread. The show also gave this film geek the chance to unearth all sorts of forgotten media formats as found footage, which results in a unique, visually-textured story that is both beautiful and terrifying.”
TV SERIES・12 DAYS AGO
Middletown Press

From writer and creator Dan Erickson, “Severance” follows Mark Scout (Adam Scott), who leads a team at Lumon Industries — where employees have undergone a “severance procedure,” which surgically divides their memories between work and personal lives. Throughout the course of the series, the mysterious and chilling “work-life balance” experiment is called into question as Mark is forced to confront reality.
TV & VIDEOS・3 DAYS AGO

New York-based streaming network FilmRise has acquired the FAST (free ad-supported streaming) rights to Canadian comedy series “Kim’s Convenience,” following an agreement with Canadian production company Thunderbird Entertainment, FilmRise announced on Wednesday.  The show’s five seasons, which are currently available by subscription VOD on Netflix, will have their own dedicated channel in addition to populating on some of the platform’s other channels globally. FilmRise plans to offer the show to FAST channels on IMDb TV, Pluto, The Roku Channel, Samsung TV+, the FilmRise Streaming Network and others. Based on Ins Choi’s award-winning play of the same name, “Kim’s Convenience” tells the story...
TV SERIES・2 DAYS AGO
film-book.com

Acorn TV have unveiled an exclusive North American cut of their trailer for “Help,” the film written by Jack Thorne (“His Dark Materials”) starring “Killing Eve’s” Jodie Comer as a care worker caught up in the first wave of the COVID-19 pandemic and Stephen Graham (“Tinker Tailor Soldier Spy”) as one of her patients. “It started as a provocation from Stephen Graham, write something for me and Jodie, write something about Liverpool,” Thorne says of the film. “As it grew so we all took authorship of it, and we all grew together, inspired by the firsthand stories we were hearing. I...
TV & VIDEOS・12 DAYS AGO
Variety

A re-watch podcast for popular fantasy-drama series “Supernatural,” titled “Supernatural Then and Now,” is set to launch Jan. 24. Hosted by Richard Speight, Jr. and Rob Benedict (who played the angel Gabriel and God in the series), “Supernatural Then and Now” will feature behind-the-scenes stories with cast, crew and producers of “Supernatural” — from favorite memories on set to conversations about mythology in the writers’ room. “We are incredibly grateful for the support the fans of ‘Supernatural’ have given us over the years. We’re excited to be a part of this special gift to the fans that will arrive just in time...
TV SERIES・18 HOURS AGO
Gamespot

What goes up must come down. And when it comes to TV shows, the same has to be said. Each year, dozens of TV shows premiere, but each year dozens are also sent out to pasture--sometimes after a long and successful run, oftentimes after only a single season. That's especially true for Netflix, a streaming platform that unveils a seemingly endless stream of new shows each and every year.
TV SHOWS・2 DAYS AGO
Laredo Morning Times

Variety has been given exclusive access to the trailer (below) for Danish horror film “Speak No Evil,” which has its world premiere at Sundance. Sales are being handled by TrustNordisk. The film follows a Danish family on vacation in Tuscany, where they befriend a Dutch family. Months later...
MOVIES・9 DAYS AGO