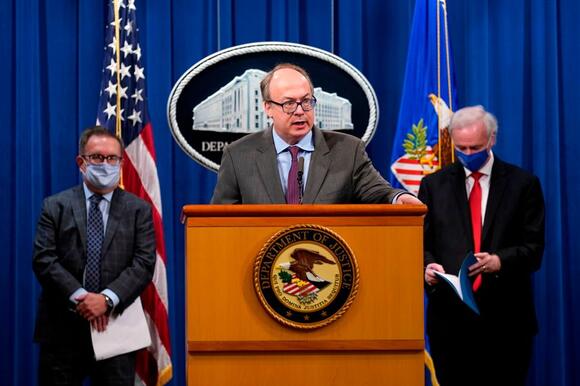 The committee on Monday scheduled a vote to pursue contempt charges against Jeffrey Clark, a former Justice Department lawyer who aligned with President Donald Trump as he tried to overturn his defeat. Clark appeared for a deposition Nov. 5 but told lawmakers that he would not answer questions based partly on Trump’s legal efforts to block the committee’s investigation.

The vote will come as the panel is also considering contempt charges against former White House Chief of Staff Mark Meadows, who was Trump’s top aide the day that hundreds of his supporters violently attacked the U.S. Capitol and interrupted the certification of President Joe Biden’s victory. Meadows was subpoenaed in September but has not yet sat for an interview with the committee.

The panel has vowed to aggressively seek charges against any witness who doesn’t comply as they investigate the worst attack on the Capitol in two centuries, and the Justice Department has signaled it is willing to pursue those charges, indicting Bannon earlier this month on two federal counts of criminal contempt. Attorney General Merrick Garland said then that Bannon’s indictment reflects the department’s “steadfast commitment” to the rule of law after Bannon outright defied the committee and refused to cooperate.

Clark’s case could be more complicated since he did appear for his deposition and, unlike Bannon, was a Trump administration official on Jan. 6. Trump has sued to block the committee’s work and has attempted to assert executive privilege over documents and interviews, arguing that his conversations and actions at the time should be shielded from public view.

A report issued by Democrats on the Senate Judiciary Committee detailed how Clark championed Trump’s efforts to undo the election results and clashed as a result with Justice Department superiors who resisted the pressure, culminating in a dramatic White House meeting at which Trump ruminated about elevating Clark to attorney general. He did not do so after several aides threatened to resign.

In a somewhat similar case, the Justice Department in 2015 declined to prosecute former IRS official Lois Lerner on contempt of Congress charges after Lerner delivered an opening statement at a hearing but then repeatedly declined to answer questions from lawmakers, citing her Fifth Amendment right to not incriminate herself.

This time, though, the Justice Department is considering the charges against a former administration official, not a current official. With little precedent to go on, it’s unclear what the department will do.

Clark is one of more than 40 people the committee has subpoenaed so far. The committee’s chairman, Mississippi Rep. Bennie Thompson, wrote in Clark’s subpoena that the committee’s probe “has revealed credible evidence that you attempted to involve the Department of Justice in efforts to interrupt the peaceful transfer of power” and his efforts “risked involving the Department of Justice in actions that lacked evidentiary foundation and threatened to subvert the rule of law.”

After Clark refused to answer questions, Thompson said it was “astounding that someone who so recently held a position of public trust to uphold the Constitution would now hide behind vague claims of privilege by a former President, refuse to answer questions about an attack on our democracy, and continue an assault on the rule of law.”

Despite Trump’s false claims about a stolen election — the primary motivation for the violent mob that broke into the Capitol and interrupted the certification of Biden’s victory — the results were confirmed by state officials and upheld by the courts. Trump’s own attorney general, William Barr, had said the Justice Department found no evidence of widespread fraud that could have changed the results.

The Los Angeles County Sheriff's Department is asking for the public's help in finding a man who shot another man, then chased the victim down and shot him again multiple times while he was on the phone with 911.
LANCASTER, CA・1 DAY AGO
FOX40

SACRAMENTO, Calif. (KTXL) — A Sacramento woman said she is fed up trying to fight for her own land after the Sacramento Area Flood Control Agency sent her a letter requesting a portion of her property.  Frances Tennant has lived right off Garden Highway for nearly 70 years and this isn’t the first time she’s […]
SACRAMENTO, CA・1 DAY AGO
FOX40

A Wisconsin judge on Friday approved an agreement by lawyers to destroy the assault-style rifle that Kyle Rittenhouse used to shoot three people during a 2020 street protest.
KENOSHA, WI・18 HOURS AGO
Newsweek

McConnell said he would give Biden's nominee "a fair look" on the same day he warned the president against choosing a judge from "the radical left."
CONGRESS & COURTS・1 DAY AGO

"If all Democrats hang together ... they have the power to replace Justice Breyer in 2022 without one Republican vote in support," Graham said.
CONGRESS & COURTS・2 DAYS AGO
Business Insider

"Stated simply, the primary takeaway from the past 250 years of recorded American history is that Presidents are not kings," Judge Ketanji Brown Jackson wrote in 2019.
PRESIDENTIAL ELECTION・2 DAYS AGO
The Guardian

The House select committee investigating the Jan. 6 attack on Friday announced subpoenas for more than a dozen people who led groups of "alternate electors" for former President Trump. Why it matters: Slates of fake electors organized by pro-Trump forces in the wake of the 2020 election have come under...
PRESIDENTIAL ELECTION・19 HOURS AGO

Former Wisconsin Republican Party Chairman Andrew Hitt said Friday that he will cooperate with the Jan. 6 select committee investigating the U.S. Capitol riot. Why it matters: Hitt is one of more than a dozen people who were subpoenaed Friday for leading groups of "alternate electors for former President Trump," Axios' Andrew Solender reports.
WISCONSIN STATE・17 HOURS AGO
NBC News

On Saturday, Trump is set to throw red meat to his base — and continue gearing up for a possible 2024 presidential run — at the Houston-area "Save America" rally. In this alternate reality, the ongoing investigation into his election scheming is all a witch hunt, those "alternate electors" were just trying to help America, and he and his fellow plotters are the real victims.
TEXAS STATE・3 HOURS AGO
Newsweek

As a candidate for the presidency, Joe Biden vowed to put a Black woman on the Supreme Court. Many pundits predict he'll choose Judge Jackson.
PRESIDENTIAL ELECTION・2 DAYS AGO
erienewsnow.com

Talks between former Justice Department official Jeffrey Clark and the House select committee investigating January 6 remain on ice nearly two months after the panel gave him a second chance to appear or face possible contempt charges. Clark has not heard from the committee since his deposition was delayed in...
CONGRESS & COURTS・1 DAY AGO

News that Supreme Court Justice Stephen Breyer plans to announce his retirement sent shockwaves through Washington and ended GOP hopes that the next court vacancy would occur while Republicans controlled the Senate.The court underwent significant changes under the Trump administration, when over the course of four years, president Donald Trump oversaw the confirmation of three new justices to the bench, a third of the total bench, shifting the makeup of the court firmly to the right.Mr Breyer’s retirement during the reign of a Democratic president means that the court’s overall make up will not change, for now. Thanks to...
CONGRESS & COURTS・2 DAYS AGO
The Guardian

Liz Cheney among those to condemn remarks by former House speaker as committee member Zoe Lofgren says: ‘I think Newt has really lost it’
CONGRESS & COURTS・5 DAYS AGO
USA TODAY

The House panel investigating the Jan. 6 riot has spoken to former Attorney General William Barr, committee chairman Rep. Bennie Thompson, D-Miss. said Sunday. In an interview on CBS' "Face the Nation," Thompson was asked by host Margaret Brennan if the panel intends to speak with Barr about a draft executive order prepared for former President Donald Trump that appears to be among the files the committee was seeking to obtain from the National Archives.
CONGRESS & COURTS・5 DAYS AGO

Giuliani among others subpoenaed by Jan. 6 panel

WASHINGTON — The House committee investigating the Capitol insurrection issued subpoenas Tuesday to Rudy Giuliani and other members of Donald Trump’s post-election legal team who filed multiple lawsuits claiming election fraud that were roundly rejected by the courts but gave rise to the lie that Trump did not really lose the 2020 presidential contest.
PRESIDENTIAL ELECTION・10 DAYS AGO
Business Insider

"I think it's going to be awfully difficult for the Republicans, after setting that precedent, to stretch things out," the Vermont Democrat told CNN.
VERMONT STATE・1 DAY AGO
Business Insider

AOC swipes at Joe Manchin, saying he has 'a different demand' every day and is making it tough for Democrats to pass Biden's economic agenda

"This idea of just give him what he wants — he's been given everything that he wants," Rep. Alexandria Ocasio-Cortez said on MSNBC.
CONGRESS & COURTS・1 DAY AGO