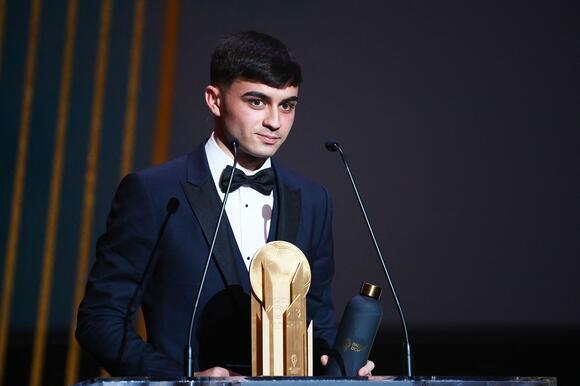 Barcelona and Spain prodigy Pedri has won the prestigious Kopa Trophy, presented to the best young player in men’s football, at the Ballon d’Or 2021 awards ceremony.

Pedri, who turned 19 last week, enjoyed a breakthrough season in the Barcelona first team, featuring in 37 of their 38 league matches, and established himself in the Spanish national team too, displaying supreme technique and balance on the ball reminiscent of one of his idols, Andres Iniesta.

He was voted Young Player of the Tournament at this summer’s European Championship and was the only Spanish player to be named in the Euros’ Team of the Tournament, before going on to play at the Olympic Games too. In total, Pedri played a remarkable 73 matches for club and country in the 2020-21 season.

Pedri saw off competition from Borussia Dortmund and England midfielder Jude Bellingham , who turned 18 during Euro 2020. Bellingham has shone as a box-to-box midfielder for club and country with a rare combination of skill, intelligence and athleticism for someone so young, and is expected to be a crucial part of England’s future.

Bellingham finished second with Bayern Munich midfielder Jamal Musiala in third. Manchester United’s Mason Greenwood finished fifth, with Bukayo Saka in sixth as the other English contenders for the award.

Pedri has struggled with injury over the past few months and is unlikely to play again before the turn of the year. He signed a new deal with Barcelona earlier this season , with a buyout of €1bn.

Spain’s top teams have been focused on cup antics most recently, particularly with the frequent meetings between FC Barcelona, Real Madrid and Athletic Club in particular.A Clasico meeting in the Supercopa semi-final was followed by Los Blancos triumphing over the Basque outfit in the final, while last year’s Copa del Rey final was repeated on Thursday night in a last-16 clash - but, unlike last season’s trophy-winning performance from the Camp Nou club, it was Athletic who beat Barca this time around. Now, continuing the recent theme of the trio of teams facing off with regularity, Athletic will play Real...
SOCCER・1 DAY AGO
The Guardian

Crystal Palace boss Patrick Vieira has played down the absence of key Liverpool duo Mohamed Salah and Sadio Mane for Sunday’s meeting at Selhurst Park.The Reds will again be without their two main attackers, who are away competing at the Africa Cup of Nations in Cameroon.It will no doubt boost Palace, who lost 3-0 to Liverpool in September with the pair on target and both hit doubles against the south London outfit last season too.Jurgen Klopp’s side have coped well without Salah and Mane, winning three of the four games they have missed to progress in two cup competitions and...
PREMIER LEAGUE・2 DAYS AGO
Washington Post

Gouiri delivers for Nice; Messi back as PSG routs Reims

PARIS — Amine Gouiri scored with a Panenka penalty kick and delivered an assist Sunday for Nice to beat Metz 2-0 and return to second place in the French league behind runaway leader Paris Saint-Germain, which welcomed back Lionel Messi as it routed Reims 4-0. PSG got off to a slow start at the Parc des Princes Stadium but ended up in control with goals from Marco Verratti, Sergio Ramos and Danilo Pereira after Reims crumbled and collapsed in the second half.
SOCCER・1 DAY AGO

Chelsea vs Tottenham prediction: How will Premier League fixture play out today?

Chelsea take on Tottenham Hotspur in the London derby in the Premier League on Sunday as Thomas Tuchel’s side look to end a run of four fixtures without a win. If last Saturday’s 1-0 defeat at Manchester City didn’t ruled Chelsea out of the title race, Tuesday’s draw at Brighton effectively ended their hopes. The Blues will be looking over their shoulder if Spurs win to close the gap to five points, with Antonio Conte’s side having an additional three games in hand. There has been a focus on the transfer window in the build-up, with Ousmane Dembele is one...
PREMIER LEAGUE・1 DAY AGO
The Independent

Marcus Rashford tapped-in a late winner for Manchester United as they beat West Ham to move up to fourth in the Premier League table.The Red Devils were woeful for the majority of the match and struggled to create chances until a late flurry of positive play in the final few moments ended with substitutes Edinson Cavani and Rashford combining to seal three points which strengthen their challenge for a spot in next season’s Champions League.West Ham had defended strongly throughout, reducing United to pot shots from distance in the second-half, until the final couple of minutes of play when their...
PREMIER LEAGUE・2 DAYS AGO
The Guardian

On a frustrating evening for the pair of big-name strikers, they once again struggled to show why they were so sought-after last summer
PREMIER LEAGUE・1 DAY AGO

Substitute Tobin Heath scored an injury-time equaliser as Women’s Super League leaders Arsenal snatched a 1-1 draw at Manchester City Heath drilled home in the second of six added minutes to ensure the visitors avoided a second straight defeat in the league following their shock loss to Birmingham a fortnight ago.Khadija Shaw had given City the lead in controversial circumstances after 65 minutes, the Jamaican international tapping home from close range from Lauren Hemp’s low cross.Arsenal were furious that play had been allowed to continue when the ball deflected off the referee in the build-up to the goal, but their...
WORLD・1 DAY AGO
The Independent

Sports stars and clubs across the world continue to provide an insight into their lives on social media.Here, the PA news agency looks at some of the best examples from January 23.FootballManchester United’s players celebrated Saturday’s last-gasp victory over West Ham.The United Way 🔴💪 pic.twitter.com/TiMjw39gpc— Harry Maguire (@HarryMaguire93) January 23, 2022What a feeling 😍 https://t.co/r2Y40TOp35— David de Gea (@D_DeGea) January 23, 2022Liverpool were happy to leave Crystal Palace with three points.Boom!!! 3 points! It’s a tough place to go and it showed. Time to recharge and get back to it after the break 😄 pic.twitter.com/UE3KQIyogO— Virgil van Dijk (@VirgilvDijk) January...
PREMIER LEAGUE・1 DAY AGO
San Diego Union-Tribune

One of Italian football’s most notable and important fixtures takes place on Sunday evening, as AC Milan host Juventus in Serie A.The fight for the title is very much on for the San Siro side, as they sit in second place, five points off local rivals and reigning champions Inter following their late win over Venezia on Saturday night.Juve are having an altogether more uncomfortable time of matters this term, still sat in fifth despite an upturn in fortunes of late. Four wins from their last five has closed the gap on the Champions League places, but they still have...
UEFA・1 DAY AGO
San Diego Union-Tribune

Manchester City travel to the south coast on Saturday evening to try and extent their lead at the top of the Premier League by beating Southampton.Saints held Pep Guardiola’s men to a goalless draw back in October but today’s visitors have been in scintillating form in recent months, winning their last 12 consecutive league fixtures and building up a lead of 11 points to second-placed Liverpool and 14 to Chelsea in third.Kevin De Bruyne’s superb curling finish was enough to secure victory over the Blues last time out, and the Belgian could start up front at St. Mary’s with Raheem...
PREMIER LEAGUE・2 DAYS AGO
The Independent

Welcome to The Independent’s live coverage of a huge London derby between Chelsea and Tottenham at Stamford Bridge. Thomas Tuchel’s side have already beaten Spurs three times so far this season, scoring seven goals and keeping three clean sheets in the process. But Chelsea have struggled of late as their title ambitions have slipped away. They now sit 13 points off Manchester City as securing a top four place becomes a more realistic target.Meanwhile, Spurs are unbeaten in nine Premier League games under Antonio Conte and are now in a superb position to qualify for next season’s Champions League....
PREMIER LEAGUE・1 DAY AGO
Yardbarker

Barcelona boss Xavi was full of praise for teenage superstar Pedri as his side squeezed out a late 1-0 win at Alaves. Dutch star Frenkie de Jong netted an 88th minute winner as La Blaugrana secured all three points despite a laboured performance in the Basque Country. However, Pedri’s return...
SOCCER・1 DAY AGO
The Independent

Manchester United’s Marcus Rashford scored a last-second winner as they beat West Ham United 1-0 at Old Trafford in the Premier League on Saturday to move up to fourth spot. Substitute Rashford tapped in a low cross from Edinson Cavani deep into stoppage time after United had broken down the left flank with the final move of the match. The win means United move above West Ham with 38 points from 22 matches while the Hammers are now fifth on 37 from 23.Until Rashford’s goal finished off an attack started by Cristiano Ronaldo and also featuring Anthony Martial there had...
PREMIER LEAGUE・2 DAYS AGO
AFP

Lionel Messi returned, another marquee signing Sergio Ramos scored as Paris Saint-Germain cruised to a 4-0 victory over Reims on Sunday to restore their Ligue 1 lead to 11 points. "We had a good game, we took three points," said PSG manager Mauricio Pochettino. Earlier, Nice briefly cut the gap with a 2-0 win at Metz. But three of the teams just behind them lost. Messi, returning from Covid, started on the bench while Kylian Mbappe returned to the starting lineup after a groin strain while Ramos made only his second league start of the season.
SOCCER・1 DAY AGO