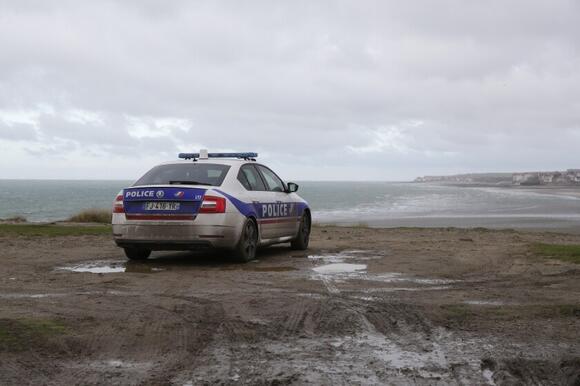 France will double the staff of the agency in charge of fighting smugglers after 27 people died trying to reach Britain in an overcrowded boat last week and will talk with Britain about how best to stop migrants from undertaking such dangerous Channel crossings, a French official said Monday.

Speaking after a defense council meeting, Interior Minister Gerald Darmanin said the anti-smuggling office will be redesigned next year to work in the same way as against drug traffickers. He said the personnel, currently at 123, will be doubled and justice officials and staff from the foreign affairs and finance ministries will join the office to give it “more muscle, not to say revolutionize it."

As France and the U.K. accuse each other of not doing enough to tackle the problem of migrant smuggling, Darmanin also said the French government is open to holding discussions with British authorities to try and stop the Channel crossings.

“What we want is a balanced agreement between the United Kingdom and the European Union that offers real solutions to all the problems," Darmanin said.

He added the situation in the northern French city of Calais will be discussed by EU interior ministers next month.

Darmanin said a cooperation deal with the U.K. would have to include the possibility that refugees can apply for asylum in Britain.

European migration officials agreed Sunday that the EU’s border agency will send a plane to monitor the shores of the Channel for migrant activity after the deadliest migration accident on record.

France is carrying out an organized crime investigation into the sinking last Wednesday. Darmanin said two people survived the tragedy, coming from Sudan and Iraq. According to survivors, he said, the migrants probably arrived in France via Belgium, Germany, Poland and Belarus.

Among the victims were “at least one pregnant woman and at least three children," Darmanin said.

The chief of France's border police, Fernand Gontier, said the Iraqi survivor arrived in the EU after boarding a plane from Syria to Belarus.

European Union officials have accused Belarus of state-sponsored “trafficking” by luring desperate migrants to the Polish border with false promises. Many are now stuck there in makeshift camps in freezing weather.

Follow all AP stories on global migration at https://apnews.com/hub/migration.

Putin and XI Have Been Warned by the United Kingdom That the West Would Not Tolerate ‘Dictatorship.’

Russia’s Putin and China’s Jinping were told by the United Kingdom on Friday that their countries’ friends would stand together to fight for democracy against dictatorships that they claimed were more emboldened than at any point since the Cold War. Liz Truss, the British Foreign Secretary, said...
POLITICS・8 DAYS AGO
KOLR10 News

WASHINGTON (AP) — Presidential advisers from Russia, Ukraine, France and Germany met for more than five hours Wednesday over the long-running Ukraine conflict, and reached no breakthrough, but promised to meet for new talks in two weeks in Berlin. The French president’s office released a statement after the Paris talks saying the parties support “unconditional […]
POLITICS・2 DAYS AGO
Business Insider

Germany says it will send 5,000 helmets to Ukraine after being slammed for refusing to send weapons

Christine Lambrecht announced the plans to Germany's defense committee and made it "clear" Germany stands with Ukraine.
POLITICS・2 DAYS AGO
The Guardian

UK reports 346 daily deaths; Denmark aims to end all restrictions – as it happened

Officials from the European Union and five countries of the north African Sahel are meeting Wednesday as the bloc readies to impose sanctions on Mali and as political turmoil roils Burkina Faso The Europeans are also deeply concerned about the activities of Russian mercenaries in the region. EU foreign policy chief Josep Borrell is holding talks in Brussels with the foreign ministers of Chad, Mali, Mauritania and Niger. Burkina Faso, which has been under the control of a military-led junta since Monday, will be represented by its ambassador, Jacqueline Marie Zaba Nikiema.It’s the seventh ministerial meeting of its...
EUROPE・2 DAYS AGO
The Independent

A fifth member of a gang that tried to smuggle 69 people into the UK on a converted fishing boat has been jailed, after his sentencing was delayed as he isolated with Covid-19 symptoms.Latvian national Aleksandrs Gulpe, 44, was jailed for eight years at Chelmsford Crown Court the National Crime Agency said.His four co-defendants were jailed at the same court in December.A single trip stood to make more than £1 million for the criminals involved, and trips were planned to happen at least weekly, the court was told.But the crew caught the attention of authorities, first off the coast...
IMMIGRATION・7 DAYS AGO
Reuters

U.S. charges man with human smuggling after 4 freeze to death near Canada border

Jan 20 (Reuters) - U.S. authorities on Thursday charged a man with human smuggling of Indian nationals from Canada, the day after four people including a baby were found frozen to death in a remote part of Canada close to the Minnesota border. The U.S. attorney's office in Minnesota said...
PUBLIC SAFETY・8 DAYS AGO
The Independent

The Defence Secretary has doubled down in his defence of Boris Johnson after the Prime Minister was accused of lying about his part in the evacuation of animals from Afghanistan Labour said new evidence shared with MPs showed Mr Johnson failed to tell the truth over how animals linked to the charity Nowzad had made their way to the UK during the Allied withdrawal from Kabul in the summer.Leaked emails have surfaced in which Foreign Office officials suggest the Prime Minister “authorised” their rescue, despite Mr Johnson previously saying it was “complete nonsense” that he had intervened.Ben Wallace, in his...
ANIMALS・2 DAYS AGO

ATHENS, Jan 21 (Reuters) - European police have dismantled a criminal network that made hundreds of millions of euros smuggling migrants from Turkey to Italy mainly on yachts, Greek police said. Greece and Italy have been on the frontline of Europe's migration crisis since it began in 2015. While most...
LAW ENFORCEMENT・8 DAYS AGO
KOLR10 News

LONDON (AP) — Prime Minister Boris Johnson braced Wednesday for the conclusions of an investigation into allegations of lockdown-breaching parties, a document that could help him end weeks of scandal and discontent, or bring his time in office to an abrupt close. Senior civil servant Sue Gray is probing allegations that the prime minister and his […]
PUBLIC HEALTH・2 DAYS AGO
San Diego Union-Tribune

Boris Johnson is coming under increasing pressure to explain his role in the evacuation of animals from Afghanistan amid reports he did influence their removal from Kabul – despite his denials.No 10 has repeatedly said Mr Johnson had no involvement in pushing for help for the charity Nowzad, after accusations that officials’ time was taken up supporting the charity rather than people who could have been brought to the UK.Leaked emails surfaced on Wednesday in which Foreign Office officials suggest the Prime Minister “authorised” their rescue, despite Mr Johnson previously saying it was “complete nonsense” that he had intervened.And Sky...
ANIMALS・2 DAYS AGO
TIME

Most coronavirus restrictions including mandatory face masks were lifted in England on Thursday, after Britain’s government said its vaccine booster rollout successfully reduced serious illness and COVID-19 hospitalizations.From Thursday, face coverings are no longer required by law anywhere in England, and a legal requirement for COVID passes for entry into nightclubs and other large venues has been scrapped. The government last week dropped its advice for people to work from home as well as guidance for face coverings in classrooms. The so-called “Plan B” measures were introduced in early December to stop the rapid spread of the omicron variant...
PUBLIC HEALTH・2 DAYS AGO
New York Post

A Ukrainian mother-of-three has armed herself with a powerful hunting rifle, vowing to “fight for Kiev” amid fears of a Russian invasion. “As a mother I do not want my children to inherit Ukraine’s problems, or have these threats passed on to them. It is better that I deal with this now,” Mariana Zhaglo, 52, told the Times of London in her Kiev kitchen, where she posed with the high-caliber weapon.
POLITICS・3 DAYS AGO
TheConversationCanada

The international crisis created by Russia over NATO’s eastern expansion has brought Europe to its most critical moment since the dissolution of the state of Yugoslavia in the early 1990s. On the surface, the crisis appears to be artificial in that there is no obvious NATO threat to the Russians. But why have Russian President Vladimir Putin and Foreign Minister Sergey Lavrov chosen this moment to send an ultimatum to NATO and its most powerful member, the United States? There are several, inter-related reasons. First, the Ukrainian presidency of Volodymyr Zelensky, elected in the spring of 2019, has been a big disappointment to...
POLITICS・2 DAYS AGO
MarketWatch

Russian stocks crashed and the ruble sank to its lowest level in more than a year, as investors feared the triggering of sanctions if the country invades Ukraine. index lost 9%, with aluminum giant Rusal RU:RUAL losing 8% and gas producer Gazprom RU:SIBN dropping 8%. The VanEck Russia ETF. RSX,
ECONOMY・5 DAYS AGO
Newsweek

"Unintentionally, the Kremlin is pushing us in the right direction," Vsevolod Chentsov told Newsweek from Brussels.
POLITICS・2 DAYS AGO
KXRM

US offers no concessions in response to Russia on Ukraine

“There is no change, there will be no change,” Secretary of State Antony Blinken said. Also not up for negotiation will be the U.S. and European response to any Russian invasion of Ukraine, he said, repeating the mantra that any such incursion would be met with massive consequences and severe economic costs.
FOREIGN POLICY・2 DAYS AGO