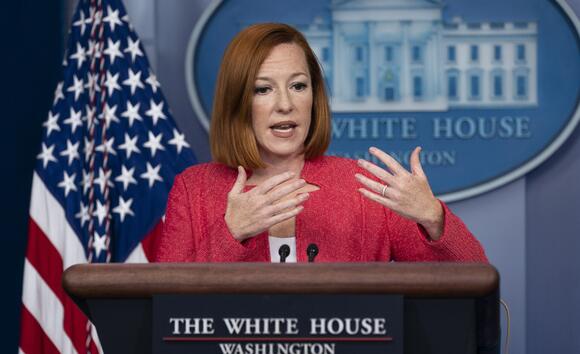 Biden has not criticized travel bans, according to White House press secretary Jen Psaki. The Biden administration has introduced its own travel limitations, she told reporters Monday.

"He believes we should follow the advice of health and medical experts. That's exactly what he did in putting in place these restrictions over the weekend," she said.

Public health experts have argued the emergence of a new variant as the world grapples with the delta strain has underscored the importance of vaccinating people living in poorer countries. But before the outbreak, South Africa had turned down vaccines from the United States due to internal struggles with hesitancy, Psaki added Monday.

Biden spoke of his decision earlier on Monday, saying the travel ban would buy the U.S. more time to vaccinate and boost a larger segment of the population. He previewed the release of a more detailed strategy on Thursday.

Biden alleged Trump's "record of hysterical xenophobia and fearmongering" rendered him ill-equipped to "lead our country through a global health emergency" in Iowa in January 2020 shortly after his predecessor slapped a travel ban on China, where COVID-19 originated. Biden and his aides later insisted he was referring to Trump’s history of inflammatory remarks about foreign countries and their nationals, not the Chinese travel restrictions.

He don’t care about the American people . He has showed us this in everything he has done and continues to do each day

President Joe Biden had not talked to Ukrainian President Volodymyr Zelensky nearly 24 hours after stoking concern over a U.S. response to a potential “minor incursion” by Russia into Ukraine. “He has not. He has spoken with him a couple of times, as you know, in the last...
POTUS・21 HOURS AGO
WashingtonExaminer

President Joe Biden got snappy Thursday after a reporter asked him about Russia threatening to invade Ukraine.
PRESIDENTIAL ELECTION・19 HOURS AGO
WashingtonExaminer

President Joe Biden’s top aides spent the first day of his second year in office wending through hours of cleanup that showed no sign of disappearing. Biden took close to 200 questions from reporters during a Wednesday news conference, but it was his answers on two issues that sparked immediate outcry. The first was Biden’s statement that a “minor incursion” by Russia into Ukraine might prompt a divided response from U.S. allies. The second came after the president cast doubt on the legitimacy of future elections in the country if Democrats’ voting legislation failed to pass.
PRESIDENTIAL ELECTION・18 HOURS AGO
Newsweek

"We need you guys to step up to the plate, Lindsey Graham, and tell us who you are," Bannon said while calling for the unmasking of five "traitor" GOP senators.
CONGRESS & COURTS・13 HOURS AGO
Newsweek

How Many Days Has Joe Biden Spent Away From The White House During His First Year?

Joe Biden has become the president who's spent the most time on personal travel on their freshman year in office.
PRESIDENTIAL ELECTION・1 DAY AGO
Newsweek

Taiwan Has Faith in the U.S. But Does Not Trust Joe Biden—Poll

A Taiwanese survey has found that only one-third of respondents trust the president, although younger people in particular support close alignment with Washington.
PRESIDENTIAL ELECTION・23 HOURS AGO
Newsweek

Pelosi defended congressional stock trading, stating that the U.S. is a "a free-market economy" and that lawmakers "should be able to participate in that."
POTUS・1 DAY AGO

A former member of the Obama administration pushed back after President Biden brushed aside a question from a Fox News reporter about allowing Russian President Vladimir Putin to make the first move in Ukraine and called it "stupid." "It isn't a stupid question," former Obama Director of Global Engagement Brett...
PRESIDENTIAL ELECTION・18 HOURS AGO
POLITICO

The most successful line of attack against a potential Trump 2024 candidacy will likely come from the populist right.
FLORIDA STATE・23 HOURS AGO
The Guardian

Donald Trump has tried to twist President Joe Biden’s words to falsely argue that the 2020 election was fraudulent, despite having no evidence to support the repeated claims. “President Biden admitted yesterday, in his own very different way, that the 2020 election may very well have been a fraud, which I know it was,” the former president said in a statement on 20 January, the anniversary of his last day in office. “I’m sure his representatives, who work so hard to make it look legit, are not happy.”During his first press conference of 2022 on Wednesday, Mr Biden was...
PRESIDENTIAL ELECTION・23 HOURS AGO

An ex-campaign staffer claimed Giuliani, others oversaw the plot, saying, "the campaign was throwing enough shit at the wall to see what would stick."
PRESIDENTIAL ELECTION・14 HOURS AGO
The Guardian

Biden nominates wealthy Democratic donor as US ambassador to UK

After a Year in Office, How Biden's Approval Rating Stacks Up Against Trump's

Joe Biden is going into his second year in office with a low approval rating that's only a few points higher than Donald Trump's, a historically unpopular president.
PRESIDENTIAL ELECTION・1 DAY AGO

Joe Biden's 7 Biggest Achievements During His First Year as President

Sagging ratings, fractured Democrats, record inflation and a virus that won't go away: What's a president to do when things are going wrong?
PRESIDENTIAL ELECTION・1 DAY AGO
The Guardian

Biden blasts GOP as lacking a message heading into midterms

Facing the potential of losing control of Congress President Joe Biden entered the midterm election year on Wednesday pledging to connect more frequently with voters and present a starker contrast with Republicans aiming to blunt his agenda.During a nearly two-hour news conference marking his first anniversary in office, Biden promised to more frequently travel the country making a case that, despite persistent challenges during the pandemic, his administration has notched notable achievements. He repeatedly said he would use those opportunities to blast the GOP as standing for little more than opposition to him.“What are they for? What is...
PRESIDENTIAL ELECTION・1 DAY AGO