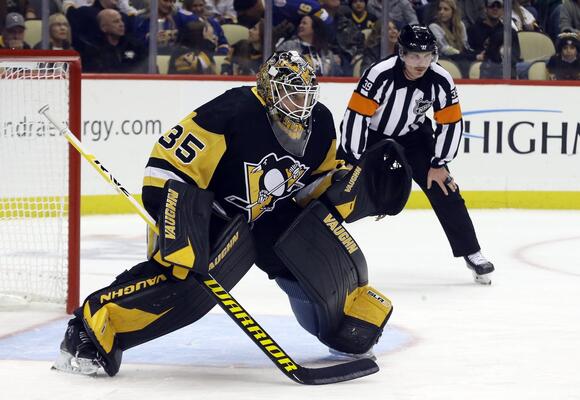 PITTSBURGH (93.7 The Fan) – Tristan Jarry’s improvements through the first couple months of the season recognized today by the NHL.

The Pens goalie named the league’s Second Star for the week after going 3-0 with one shutout in games against the Jets, Canucks and Islanders.  Those three wins come from a .978 save percentage and 0.67 goals-against average.

The shutout of the Islanders was Jarry’s third of the season and last week the 26-year-old stopped 93 of 95 shots.  If you go back to November 18 th , you would add two more shutouts and Jarry has stopped 141 of the last 143 shots faced, a .986 save percentage.

Pens are in Calgary tonight at 9p, Jarry has never lost in regulation in four career starts to the Flames.

Maybe it was the afternoon start time, or the fatigue that comes with playing a lot of hockey with three games in four days. But for whatever reason, most of the Penguins didn't have their legs under them when the puck dropped for their matchup against Winnipeg on Sunday at PPG Paints Arena.
NHL・17 HOURS AGO
Audacy

The NHL season officially started back on October 12. In this article, we track all the NHL games today as
NFL・2 HOURS AGO
nbcsportsedge.com

Editor’s Note: Now, all our premium tools for Fantasy, DFS and Betting are included in one subscription at one low price. Customers can subscribe to NBC Sports EDGE+ monthly ($9.99) or save 20% on an annual subscription ($95.88). And don't forget to use promo code SAVE10 to get 10% off. Click here to learn more!
NHL・2 DAYS AGO

Nicklas Backstrom scored on a breakaway 1:13 into overtime as the Washington Capitals rallied to defeat the visiting Ottawa Senators
NHL・1 DAY AGO
Sportsnaut

Montreal Canadiens goaltender Jake Allen will be sidelined eight weeks with a lower-body injury. Allen, 31, sustained the injury during
NHL・2 DAYS AGO
Sportsnaut

Nearly two years ago, Chris Kreider was a candidate to be traded before eventually signing a seven-year contract extension. Now
NHL・6 HOURS AGO

In a discussion about injuries, NHL great Bobby Orr once told Philadelphia Flyers defenseman Keith Yandle: “If you can skate, you can play.’’
NHL・1 HOUR AGO
Sportsnaut

After a disappointing eight-game homestand that saw them win just three times, the Vegas Golden Knights begin arguably their most
NHL・18 HOURS AGO
puckprose.com

Why the Tampa Bay Lightning could be the Last NHL Dynasty

A dynasty is rare in the current NHL era, but the Tampa Bay Lightning have had all the necessities to achieve lasting success. The Tampa Bay Lightning have gone from failures and the laughing stock of the league in 2019 to back-to-back Stanley Cup Champions. The front office had the mental fortitude to not pull the plug after a series of conference finals losses and a Stanley Cup final loss prior to the first-round upset to the Columbus Blue Jackets. There are examples of dynasties ending due to old age, and others due to the front office giving up too early.
NHL・2 DAYS AGO
Chicago Tribune

Kevin Lankinen is back on the shelf seemingly as quickly as he returned. The Chicago Blackhawks placed the backup goalie on injured reserve Sunday with a right hand injury a day after he made 40 saves during a 4-3 overtime road loss to the Minnesota Wild. Lankinen appeared in each of the Hawks’ last two games, his first action since returning from COVID-19 protocols. Before that, his last ...
NHL・16 HOURS AGO

Wild ‘in a good flow’ ahead of tilt with lowly Canadiens

When the Florida Panthers last saw the Seattle Kraken, they were attempting to set an NHL record for most home
NHL・1 DAY AGO
Sportsnaut

Gabriel Landeskog scored at 1:16 into overtime, Valeri Nichushkin had a goal and an assist, and the Colorado Avalanche beat
NHL・1 DAY AGO
93.7 The Fan

Sure it was the Pens 5th straight win, 16th win in their last 18, but Mike Sullivan had some issues after a 3-2 win over Winnipeg as Kris Letang hits mark
NHL・14 HOURS AGO