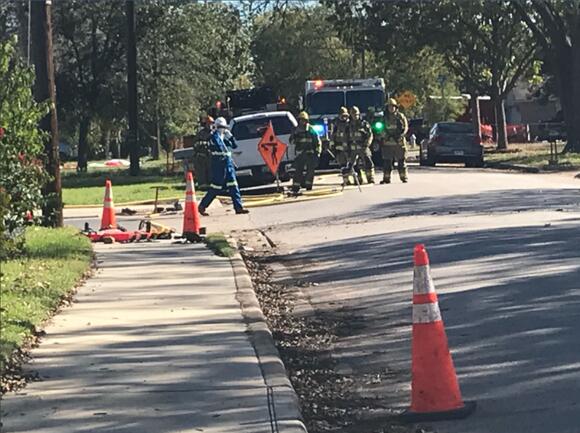 AUSTIN (KXAN) — Evacuations are underway in a north Austin neighborhood due to a struck gas line, officials say.

Austin Fire said a HazMat task force was on the scene near Fawnridge Drive and North Drive.

Multiple crews were on the scene and evacuations were underway in the area. As of 12:47 p.m., four homes were evacuated.

According to Texas Gas Service, a third party contractor was working in the area and hit and damaged a gas line. The service says it’s responding with AFD and crews will be on site for the rest of the afternoon to mitigate damage and make repairs.

Texas Gas Service has crews on the scene and they are working with AFD crews to stop the gas leak.

No other information was released.

Crews have put out a fire at a condo in west Austin, the fire department said.
AUSTIN, TX・8 HOURS AGO
KXAN

It's been nearly four months since 75 dogs were killed in a fire at the Ponderosa Pet Resort in Georgetown, leaving dozens of grieving families behind. Investigators say there was no staffing at the pet resort overnight at the time, and the facility didn't have a fire suppression system. The Chief of the Georgetown Fire Department is now proposing new amendments to prevent a situation like this from happening again.
GEORGETOWN, TX・10 HOURS AGO
KXAN

The bodies of two men were found in an abandoned oil tanker trailer northeast of Seguin Monday afternoon, according to the Guadalupe County Sheriff's Office.
GUADALUPE COUNTY, TX・1 DAY AGO

Someone with a crossbow is killing deer in northwest Austin, TPWD investigating

There have been at least six deer identified who were shot by someone. Four were found dead and two are still unaccounted for, TPWD said.
AUSTIN, TX・17 HOURS AGO
KXAN

The Texas Parks and Wildlife Department (TWPD) announced Wednesday that the temporary suspension on prescribed burns also applies to Buescher State Park in Smithville, as the agency shared who will be part of an independent panel to review what happened during the Rolling Pines Fire in Bastrop.
BASTROP, TX・12 HOURS AGO
KXAN

A Silver Alert has been activated for an 80-year-old woman missing Tuesday night, according to the Austin Police Department.
AUSTIN, TX・1 DAY AGO
KXAN

A GoFundMe account for the Texas French Bread Bakery met its goal of $100,000 Wednesday with several donations from community members of $1,000 or more. As of Wednesday morning, two donations came in at $3,000.
AUSTIN, TX・12 HOURS AGO

Arrest made after SWAT response in east Austin

The Austin Police Department said a person was taken into custody around 5 a.m. Tuesday following a situation where someone was threatening another person with a gun. APD said it received the call at 1:42 a.m. to the Mueller Place Apartments in the 5800 block of Wellington Drive.
AUSTIN, TX・1 DAY AGO
KXAN

Police responded to 7522 N. I-35 Service Road southbound near Ojos Locos Restaurant Bar on Jan. 23 after a caller said he had been shot. Emergency personnel found two men lying in the parking lot, police said.
AUSTIN, TX・9 HOURS AGO
KXAN

38-year-old Texas woman missing, may be in danger

She was last seen around 5 a.m. Tuesday in the 21400 block of Derby Day Avenue in Pflugerville in a blue 2014 Chevrolet Sonic with Texas license plat FZH-0400, TCSO says.
TRAVIS COUNTY, TX・3 HOURS AGO
KXAN

"These I-35 improvements have been talked about for more than 25 years," said Tucker Ferguson, TxDOT Austin district engineer. "And throughout that time, TxDOT has worked hard to gather feedback from our community with the goal of incorporating those ideas while still meeting the challenges and the mission to improve safety, address congestion and enhancing mobility."
AUSTIN, TX・1 DAY AGO

The City of Austin is suspending its large brush and bulk collection "until further notice" beginning Feb. 21 for curbside customers due to staffing shortages caused by COVID-19. The city is also having trouble filling open positions within Austin Resource Recovery, even after recently increasing pay to help entice people to apply.
AUSTIN, TX・13 HOURS AGO
KXAN

“Unfortunately, this has been a rather violent weekend here in Austin that has resulted in multiple homicides having occurred over the weekend,” Michael Bullock with APD said in a briefing with the media early Monday.
AUSTIN, TX・2 DAYS AGO
KXAN

A man was arrested by the US Marshals for the deadly stabbing of a 33-year-old man in downtown Austin.
AUSTIN, TX・4 HOURS AGO
KXAN

Omicron subvariant detected in Texas — what is BA.2?

Austin Public Health confirmed to KXAN at least three cases of the subvariant have been identified by Houston Methodist Hospital.
AUSTIN, TX・8 HOURS AGO
KXAN

A man accused of shooting and killing another man in Manor late last year was arrested Monday, according to the Travis County Sheriff's Office.
MANOR, TX・1 DAY AGO
KXAN

State mental hospitals are struggling with low staffing, causing hundreds of beds to sit unused and backlogging over 2,100 mentally ill people – a record high – in county jails for months as they wait for admission, according to records and discussion at a Wednesday meeting of the Joint Committee on Access and Forensic Services.
AUSTIN, TX・7 HOURS AGO