Maryland Weather: Winds Contribute To Chilly Weather, Plus A Chance For Flurries 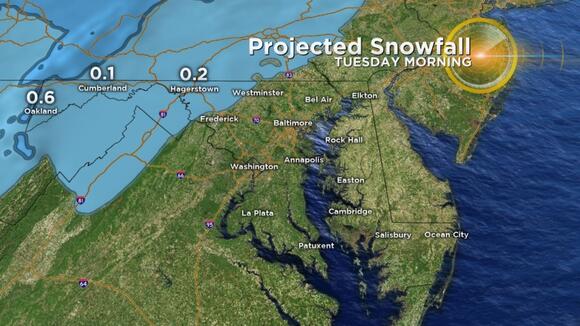 BALTIMORE (WJZ) — It has been a chilly and windy start to the work-week. Highs today did not make it out of the 40s today, making it feel like winter for sure!

Clouds will be on the increase overnight as temps fall just below freezing.

Another Alberta Clipper system is slated to dive into the mid-Atlantic Tuesday morning. It will be a very fast-moving system and will be lacking significant moisture, but it will bring the potential for flurries and a light snow shower to parts of central Maryland.

The best chance to see these conversational snowflakes will be for areas north and west of the Beltway, however, a brief snow shower or a few flurries could sneak their way into Baltimore as well.

Little to no accumulation is expected across central Maryland. Even in the mountains, the forecast calls for less than 1″ of snowfall accumulation as this system swings through the area.

If you live south and east of the city, you are out of luck if you were hoping to see a few flakes. Instead, just expect an increase in cloud cover for a period of time during the first half of Tuesday.

PHILADELPHIA (CBS) — It was a frigid start to Friday, with a bitter blast of cold forcing wind chills near zero. Arctic air and a quiet pattern will remain over our area through the weekend. On Saturday morning, dangerous wind chills will dip to either side of zero. In the Poconos, that feels-like temperature will drop to -15. Make sure to cover all exposed skin to avoid frostbite if you are headed outside for any early morning activities. Highs on Saturday will run 10 to 15 degrees below average in the mid-20s and low 30s under sunny skies. On Sunday, we see a slight bump in temperatures to the mid-30s with increasing clouds. The next chance for snow will be early next week, with a wintry mix possible Tuesday. CBS3’s Kate Bilo and Tammie Souza contributed to this report.
PHILADELPHIA, PA・7 HOURS AGO
CBS Baltimore

Maryland Weather: Alert Day In Effect For This Frigid Friday

BALTIMORE (WJZ) — Frigid would be the best word to sum up our Friday. Your First Alert Weather Team issued an Alert Day for the dangerous cold we’ll be dealing with all day. Arctic air settled in early Friday morning as wind chills hovered in the single digits during rush hour. Temperatures were in the mid to upper teens, but it felt like 1-8° throughout much of Maryland. BWI Thurgood Marshall Airport bottomed out with a bone-chilling wind chill of 4°. That’s why bundling up is especially important Friday because it will be miserably cold outside. We’ll top out in the upper 20s, but the brisk north...
BALTIMORE, MD・9 HOURS AGO
CBS Pittsburgh

Pittsburgh Weather: The Bitter Blast Is Here, How Long Will It Last?

PITTSBURGH (KDKA) – The chill has settled in. It’s going to stick around today and into tomorrow morning. Now we do have some good news this morning as clouds coming in off of Lake Erie has helped to keep temperatures up slightly above what we were expecting. WEATHER LINKS: Current Conditions | School Delays & Closings | Local Radar | Weather App | Photos By 6:00 a.m., temperatures in Pittsburgh will have bottomed out around 10 degrees. Photo Credit: KDKA Weather Center We still have nearly two hours to go before sunrise as I am writing this, so temperatures could easily...
PITTSBURGH, PA・18 HOURS AGO
CBS Miami

MIAMI (CBSMiami) – It was a wet start to the weekend with heavy downpours overnight and early Friday morning. More than two inches of rain have fallen so far across parts of South Florida and there is some lingering ponding and flooding in spots. Although we are enjoying a break from the rain now, another round of storms will move in later. Keep your umbrella close and stay weather alert. The atmosphere remains moist and unstable ahead of a cold front moving across north Florida. The Storm Prediction Center says there is a marginal risk of severe weather on Friday. This means there...
MIAMI, FL・9 HOURS AGO

PITTSBURGH (KDKA) – Here comes the cold. As Arctic air continues to drain into the region and our skies begin to clear overnight, we have the set up for frigid temperatures. (Photo: KDKA) Temperatures will dip into the single digits overnight with wind chills falling below zero. When it gets this cold and cold feeling, long exposure to cold temperatures is not recommended, as frostbite and hypothermia become concerns. (Photo: KDKA) With the wind chill, or “feels like temperature”, it will feel about 5 degrees below zero at Friday morning’s bus stop. High temperatures for the day will likely only top off in the...
PITTSBURGH, PA・20 HOURS AGO
CBS Chicago

Chicago Weather: Lows In The Upper Teens, Possible Snow Showers Over The Weekend

CHICAGO (CBS) — Increasing clouds, breezy and cold tonight. Lows will be in the upper teens with a chance for light snow and flurries after midnight. Light accumulations will be possible. Mostly cloudy Saturday afternoon with highs in the mid to upper 20s. Snow showers are likely Saturday evening through the early morning hours of Sunday. Lows in the mid-teens. One to three inches of snowfall is in the forecast, with isolated higher totals possible. Travel impacts due to slippery roads will be possible on Saturday night. (Credit: CBS 2) (Credit: CBS 2) Partly cloudy for Sunday afternoon with highs in the low 20s. Scattered snow showers possible Sunday night into Monday. Turning colder starting Tuesday with highs in the upper teens and low 20s into Wednesday. (Credit: CBS 2) TONIGHT: Mostly cloudy with overnight light snow showers. Turning breezy, southwest wind at 10 to 20 mph. Low 17°. SATURDAY: Mostly cloudy with a 30% chance of light snow in the morning. Breezy west wind gusting to 30 mph. High 27°. SUNDAY: A chance for morning snow, then partly cloudy in the afternoon. High 22. (Credit: CBS 2)
CHICAGO, IL・1 HOUR AGO
WYFF4.com

GREENVILLE, S.C. — An arctic front pushed through the area and left behind much colder temperatures for Friday. (Watch the latest forecast above) Daytime highs will be in the middle 30s for the Upstate and near 30 degrees for the mountains. The cold front is now along area beaches...
ENVIRONMENT・13 HOURS AGO
fortwaynesnbc.com

FORT WAYNE, Ind. (Fort Wayne’s NBC) - Colder weather is in store this Friday through the weekend. Several areas this morning woke up to single digit temperatures under mostly cloudy skies. Skies will clear through the day but will not get very warm despite the sunshine as arctic air takes over the Midwest. High temperatures will only reach the mid to low 20s with overnight lows set to dip back to the low teens. Cloudy skies are in store Saturday with highs in the upper 20s ahead of a chance for flurries Sunday.
FORT WAYNE, IN・14 HOURS AGO

EAST TEXAS (KLTV/KTRE) - Good morning, East Texas! It’s a cold start with temperatures in the 20s this morning. Expect much lighter winds today and clouds clear out early with sunshine for much of the day. Temperatures stay chilly through the afternoon with highs only reaching the mid 40s. Another hard freeze tonight with temperatures in the 20s tomorrow morning. Expect lots of sunshine this weekend and temperatures gradually warming into the 50s by Sunday afternoon. Another cold front is on the way for early next week. This one doesn’t have as big of a push of cold air, but it brings better rain chances to East Texas and we need the rain.
EAST TEXAS, PA・18 HOURS AGO
WTHI

Weekend Weather Wrap - Not as cold with a chance of snow

WABASH VALLEY (WTHI) - Temperatures won't be quite as cold the next couple days, but there's also a chance for snow. All-in-all, it'll be another typical winter weekend in the Wabash Valley. See the full forecast discussion below. FRIDAY NIGHT:. A mostly clear sky is expected tonight. That means temperatures...
ENVIRONMENT・10 HOURS AGO
WBIR

Partly to mostly cloudy and cold with highs in the lower to middle 30s. Northerly winds will keep wind chills in the teens and 20s through the day.
ENVIRONMENT・17 HOURS AGO
mypanhandle.com

The cold and rainy set up will last through much of the night, especially for our eastern areas who could still experience patches of drizzle overnight. Low temperatures figure in the 30 degree range but coastally and inland. Looking ahead to Sunday, we’ll be thankful for the sunshine later in...
ENVIRONMENT・10 HOURS AGO

Less chilly, but more wind plus snow through Saturday

Chicago Weather: A Little Snow For The Weekend

CHICAGO (CBS) — Weak disturbances will parade across our area bringing a dusting of snow for the next three mornings. (Credit: CBS) According to CBS 2 meteorologist Mary Kay Kleist, by noon Sunday we could have a couple of inches on the ground from both the Saturday morning activity as well as the light snow expected very early Sunday. (Credit: CBS) By the middle of next week, arctic air invades once again! (Credit: CBS) A parade of weak disturbances the next few mornings will give us a fresh dusting of snow. Happy Weekend! @cbschicago #FirstAlert pic.twitter.com/wfMZnXauCa — Mary Kay Kleist (@MaryKayKleist) January 21, 2022 TONIGHT: Light snow toward daybreak. Minor amounts. Low 17. SATURDAY: Morning snow showers, then mostly cloudy. High 27. SATURDAY NIGHT: Light snow. An inch or so of accumulation. Low 15. SUNDAY: Leftover early morning show then mostly cloudy. High 22. (Credit: CBS)
CHICAGO, IL・10 HOURS AGO
cbslocal.com

Maryland Weather: Alert Day In Effect For This Frigid Friday

BALTIMORE (WJZ) — Frigid would be the best word to sum up our Friday. Your First Alert Weather Team issued an Alert Day for the dangerous cold we’ll be dealing with all day. Arctic air settled in early Friday morning as wind chills hovered in the single digits...
BALTIMORE, MD・16 HOURS AGO
CBS Baltimore

BALTIMORE (WJZ) – Baltimore City has issued a “Code Blue” Extreme Cold Alert that will remain in effect through Saturday. City Health Commissioner Dr. Letitia Dzirasa said these alerts are issued anytime the wind chill outside reaches 13 degrees or below. “I think the wind chill today was 11. It’s pretty cold out there,” Dr. Dzirasa said. “(The alert is for) those residents experiencing homelessness, our older adults, those who may not have access to heat within their home.” The same conditions led WJZ’s First Alert Weather team to declare an Alert Day on Friday. If you’re heading out, doctors stress the importance of...
BALTIMORE, MD・2 HOURS AGO
WGNO

What is wind chill and how fast can it cause frostbite?

The wind can be a deceiving winter weather factor, sometimes even causing frostbite. Here's what you need to know about wind chill.
ENVIRONMENT・16 HOURS AGO
CBS Baltimore

Maryland Weather: A Cold End To The Workweek, With A Winter Weather Advisory In Place For The Lower Eastern Shore

BALTIMORE (WJZ) — It has been a cold end to the workweek in central Maryland, and even a slight wind made it feel much colder than the thermometer reading. Temperatures didn’t make it out of the 20s all day, and it felt like the single digits as we woke up this morning. The cold continues, and some folks on the Eastern Shore will deal with accumulating snow on Friday night. Wind chills will fall into the single digits once again — however, we did not issue a WJZ Alert Day for Saturday, simply because kids will not be waiting at the...
BALTIMORE, MD・5 HOURS AGO