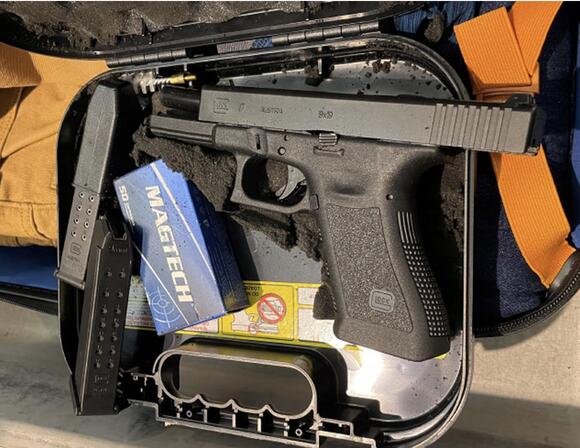 NEWARK, N.J. (1010 WINS) -- Officials arrested a man after he was caught with an unloaded gun and ammunition at a Newark Liberty International Airport security checkpoint on Friday.

According to a statement from the TSA on Monday, the man, a Florida resident, told a Transportation Security Administration officer he forgot to declare the gun when he checked in which would have allowed the firearm to be transported with checked luggage.

Authorities said the gun was correctly packed in a hard-sided case as required by the TSA along with a box that contained 35 bullets.

The man whose identity was not immediately available was arrested by Port Authority police.

There have been 13 gun arrests at Newark Liberty in 2021, according to officials.

The congregation had at one point had its service livestreaming on Facebook, but it has since been removed from the website. Reports said only audio of the situation was captured, and a man could be heard speaking angrily at times.
COLLEYVILLE, TX・14 HOURS AGO
1010WINS

The first reported shooting happened Friday just before 10 p.m. at the Lillian Wald Houses on the Lower East Side, located at 691 FDR Drive.
NEW YORK CITY, NY・18 HOURS AGO
1010WINS

NYPD searching for suspect in Midtown shooting over parking dispute

An early morning New Year’s Day dispute over a parking spot in Midtown ended with a man being shot in the arm and police are now asking for the public’s help in locating and identifying the shooter.
NEW YORK CITY, NY・1 DAY AGO
1010WINS

Police are searching for a woman accused of violently assaulting an employee at a Bronx dry cleaner earlier this month, authorities said.
BRONX, NY・1 DAY AGO

The shooting happened Friday at around 3 p.m. at 3440 White Plains Road in Olinville. Police said one person fired the shots, but his target was unclear.
NEW YORK CITY, NY・1 DAY AGO
1010WINS

Police are searching for a man who was caught on surveillance video repeatedly firing a gun at a city speed camera in Queens earlier this month, authorities said.
QUEENS, NY・2 DAYS AGO
1010WINS

Officials arrested a man after he fatally struck a pedestrian near a Queens mall Thursday night, according to authorities.
QUEENS, NY・1 DAY AGO
1010WINS

Woman killed after being pushed in front of train in Times Square; suspect 'known' to police

Police said it happened at 9:39 a.m. Saturday, where the victim was waiting for a southbound R train at the Times Square-42nd Street station.
NEW YORK CITY, NY・13 HOURS AGO

TX synagogue hostage-taker claims to be brother of terrorist in jail, wants her released: reports

The congregation had at one point had its service livestreaming on Facebook, but it has since been removed from the website. Reports said only audio of the situation was captured, and a man could be heard speaking angrily at times.
COLLEYVILLE, TX・11 HOURS AGO
1010WINS

An off-duty correction officer was arrested in Brooklyn Thursday afternoon after allegedly punching a woman during a verbal dispute in front of her home.
NEW YORK CITY, NY・1 DAY AGO
1010WINS

“I’m asking residents to keep your windows closed as our fire department and our emergency responders are assessing the extent of this fire,” Lora said.
PASSAIC, NJ・19 HOURS AGO
1010WINS

Authorities launched an investigation after a man was discovered stabbed to death Thursday night in Harlem, according to the NYPD.
NEW YORK CITY, NY・1 DAY AGO

A man is in custody as the NYPD investigates a multi-vehicle collision that occurred in Brooklyn Thursday afternoon, according to authorities.
NEW YORK CITY, NY・1 DAY AGO
1010WINS

The NYPD on Thursday released surveillance video of a man they are looking to identify for slashing a 77-year-old man during an argument aboard a subway train in Brooklyn, authorities said.
NEW YORK CITY, NY・2 DAYS AGO
1010WINS

The number of carjackings in New York City exploded from 2018 to last year, surging 355% in the three-year span, according to new NYPD statistics.
NEW YORK CITY, NY・1 DAY AGO
1010WINS

Police said it all happened around 8:30 a.m. on East 41st Street and Fifth Avenue in Midtown, when the 59-year-old victim approached Xavier Israel, 25, of Ohio, as he lied on the ground.
NEW YORK CITY, NY・2 DAYS AGO
1010WINS

A 911 call about a possible home invasion turned into a narcotics bust in the Bronx, the NYPD said Wednesday.
BRONX, NY・3 DAYS AGO