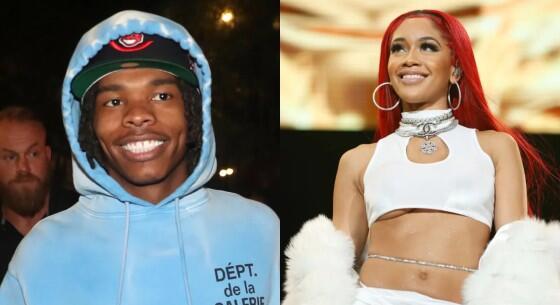 Saweetie and Lil Baby sparked dating rumors this holiday weekend and despite Baby denying their romance, Internet sleuths are convinced the duo are romantically linked…by his shoe.

Rumors about their romance began swirling when the stars were allegedly seen shopping together at the Chanel store, in NYC, where Baby reportedly dropped 100k on the Icy rapstress. The two were both in town to perform at Powerhouse and Saweetie also hit the stage on Saturday Night Live.

Baby then took to Twitter, where he tweeted then deleted, “Baby not dating NO ONE!! I’m single!” Welp, fast-forward a day or two later and Saweetie posted a 10 page slide, captioned “Icy Dump” on Instagram, showing her perched on someone’s lap. Fans quickly noticed the shoe, which happened to match a pair of shoes Baby was seen wearing earlier. She then deleted the image.

Saweetie’s ex Quavo also chimed in on the rumors, writing “Ain’t tripping we can swap it out #QCTheLabel,” on his IG story. Even Baby’s baby’s mother Jayda Cheaves “liked” several status updates on TheShadeRoom pertaining to the trending topic.

As expected, the Internet is having a blast with the rumors.

Neither Baby or Saweetie have confirmed their relationship, but we have a feeling this is going to continue to make headlines.

As rumors of a Jayda Cheaves and Lil Baby reunion began to swirl at the end of 2021, the My Turn rapper outed himself when his signature rings were spotted holding Cheaves in a loving embrace on her Instagram Story. From the looks of her flurry of photos posted on...
CELEBRITIES・4 DAYS AGO
iHeartRadio

The "Tap In" singer is bringing new energy all 2022
CELEBRITIES・2 DAYS AGO
hotnewhiphop.com

Jayda Cheaves recently enjoyed a romantic night with her partner, sharing pictures of the beautiful home set-up that her mysterious man put together. There were rumors that rapper Lil Baby, Jayda's ex, was the one responsible for spoiling his longtime lover and according to some eagle-eyed fans, the Atlanta-based artist has allegedly been identified in the images.
CELEBRITIES・4 DAYS AGO
hypefresh.co

Rappers love flaunting their money at nightclubs and in music videos. They’ll even take to social media just to pose with a stack of money. While they enjoy showing off their riches, some take even more pride in protecting their earnings. Lil Baby especially comes off as a very frugal rapper as he likes to save every dollar he makes. Not to mention, the “My Turn” rapper has made it a part of his daily routine to count his money 14 times.
CELEBRITIES・3 DAYS AGO

slowthai played a wild $1 show at Baby’s All Right – Lil Yachty was there too (pics, setlist)

UK rapper slowthai made a quick trip to NYC to play Baby's All Right on Thursday night, a show that was only announced the day before and only cost $1. Needless to say, there was a giant line outside the club to nab one of the 40 tickets that would be available at the door -- the rest were given out via lottery -- and and those who braved the cold to get in were then met with a packed, sweaty, crazy show.
MUSIC・9 DAYS AGO
BET

Princess Love Will Be 'Officially' Single In August

She looks good and she knows it!
BEAUTY & FASHION・17 DAYS AGO
Cosmopolitan

Judging from a slightly ominous "Happy New Year" trailer, the Kardashians' new Hulu show is dropping sometime in 2022—and Kourtney Kardashian just confirmed that her and Travis Barker's engagement will be featured. Kourt dropped the tiniest teaser ever of the engagement, posting a photo on Instagram Stories of her...
TV & VIDEOS・3 DAYS AGO

Yung Miami reignited relationship rumors with Diddy after she shared a photo of the two of them celebrating New Year's Eve together in Miami.
BEAUTY & FASHION・21 DAYS AGO
HelloBeautiful

Phaedra Parks took to Instagram to strut her stuff in an all-black Chanel look and we're swooning over the fashionable ensemble!
BEAUTY & FASHION・13 DAYS AGO
HelloBeautiful

Rapper Asian Doll is being praised after keeping her cool during a podcast taping gone wrong. Fresh & Fit host Myron Gaines got aggressive with the female guests before she called him "mean "and walked off.
CELEBRITIES・19 DAYS AGO
HelloBeautiful

Teyana Taylor took to Instagram to show off her adorable daughters, Junie and Rue Rose, and it's clear that they get it from their mama!
FAMILY RELATIONSHIPS・14 DAYS AGO

Fresh off the release of his latest mixtape Colors, YoungBoy Never Broke Again may be taking some time off, and for good reason. Since the start of 2020, the Baton Rogue rapper has dropped two official albums (Top and Sincerely, Kentrell), four commercial mixtapes (Still Flexin, Still Steppin, 38 Baby 2, Until I Return, and Colors), two collaborative projects (Nobody Safe with Rich the Kid and From the Bayou with Birdman), and two compilation albums (Ain’t Too Long 2 and Never Broke Again: The Compilation Vol. 1).
CELEBRITIES・1 DAY AGO
Newsweek

"Emily in Paris" star Ashley Park has revealed that what she thought was a physical reaction to BTS acknowledging her was actually Omicron symptoms.
PUBLIC HEALTH・2 DAYS AGO
Indy100

It's safe to say that we're living in a very strange era of celebrity couples. Perhaps due to our obsession with social media, there is rarely a day that goes by where we don't hear of an absurd quote or see an eye-brow raising Instagram post from the most talked about celebrity couples in 2022.
BEAUTY & FASHION・1 DAY AGO
Ok Magazine

Janelle Brown has been reflecting on her relationship with Kody Brown. In the latest episode of Sister Wives, Janelle spoke to Robyn about the growing tension in the family, as they've been clashing over Kody's strict guidelines amid the COVID-19 pandemic. Robyn admitted to Janelle during the Sunday, January 16,...
RELATIONSHIPS・6 DAYS AGO

Ben Affleck and Jennifer Lopez are the couple we never knew we needed this year! Although they are 2021 couple goals and appear to be living their best lives right now, things weren’t always so peachy with the former exes who initially dated between 2000 and 2004! If you always wanted to know more details about their widely-publicized split and why they called off their engagement just days before their wedding in 2004 then you’re in luck, as the 49-year-old The Last Duel actor just revealed the real reason for them going their separate ways 17 years ago!
CELEBRITIES・27 DAYS AGO
The US Sun

KELLY Clarkson's ex-husband Brandon Blackstock is now a grandfather as his daughter Savannah has welcomed a child. The American Idol alum filed for divorce from Brandon back in June 2020. Savannah took to Instagram to share a snap of newborn footprints as she captioned the sweet photo: "January 17, 2022."
RELATIONSHIPS・2 DAYS AGO
HelloBeautiful

Blue Ivy is all grown up in this never-before seen photo with Mama Tina.
CELEBRITIES・16 DAYS AGO