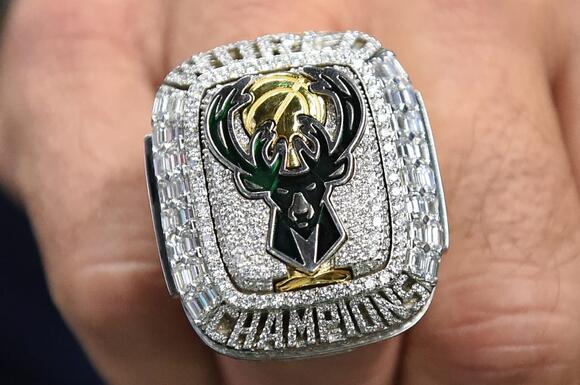 According to Shams Charania of The Athletic, the Milwaukee Bucks are signing Ja'Vonte Smart and waiving Justin Robinson.

The defending NBA Champion Milwaukee Bucks have reportedly made a series of roster moves on Monday.

According to Shams Charania of The Athletic, they are signing Ja'Vonte Smart and waiving Justin Robinson.

The Bucks won the NBA Championship for the first time in over 50 years last season, and Giannis Antetokounmpo after having many dominant regular seasons finally got over the hump in the NBA Playoffs.

He added an NBA Finals MVP and NBA Championship to his resume that already included a Defensive Player of The Year and two MVP's.

Robinson was in his first season with the Bucks and had also played for the Washington Wizards and Oklahoma City Thunder.

Smart is in his rookie season after going undrafted in the 2021 NBA Draft.

The Chicago Bulls were already unhappy with the Milwaukee Bucks and Grayson Allen over what happened in Friday night’s game. The Bucks’ social media team didn’t help matters on Saturday, either. Allen was ejected for a flagrant-2 foul Friday after a dangerous play on Chicago’s Alex Caruso....
NBA・17 HOURS AGO
TMJ4 News

Giannis Antetokounmpo had 30 points and 12 rebounds to help the Milwaukee Bucks overcome the ejection of Grayson Allen and beat the Chicago Bulls 94-90.
NBA・1 DAY AGO
FastBreak on FanNation

Grayson Allen has been ruled out for the game between the Kings and Bucks on Friday night in Milwaukee.
NBA・14 HOURS AGO
Siskiyou Daily

The Chicago Bulls (28-15) head to the Cream City Friday for an 8 p.m. ET game against the Milwaukee Bucks (28-19) at Fiserv Forum. Below, we look at the Bulls vs. Bucks odds and lines, and make our expert NBA picks, predictions and bets. Chicago snapped a four-game losing skid...
NBA・1 DAY AGO

Grayson Allen grabbed Alex Caruso's wrist while Caruso was going up for a layup in Friday's game, sending him crashing to the court on his wrist.
NBA・16 HOURS AGO
Chicago Tribune

5 things we learned from the Chicago Bulls’ loss to the Milwaukee Bucks, including a poor-shooting night leading to a 5th setback in 6 games

The Chicago Bulls came inches from claiming the first round of battles with the Milwaukee Bucks this season, falling short by four points in a 94-90 loss Friday night at Fiserv Forum. It wasn’t the prettiest game for either team — both shot under 20% from 3-point rangein a vintage Midwestern slugfest as the Bucks and Bulls jockey for position at the top of the Eastern Conference. The Bulls ...
NBA・46 MINUTES AGO
WausauPilot

MILWAUKEE (AP) — One night after overcoming a defensive struggle to beat the Chicago Bulls, the Milwaukee Bucks unleashed their offense on the Sacramento Kings. The end result was the same, with the Bucks claiming a 133-127 victory Saturday night behind the play of veterans Khris Middleton and Jrue Holiday. Middleton finished with a game-high 34 points and Holiday added 26 as the Bucks won without Giannis Antetokounmpo, who sat out with right knee soreness.
NBA・32 MINUTES AGO

Kings Starting Lineup Against The Bucks

The Sacramento Kings have announced their starting lineup for their game against the Milwaukee Bucks.
NBA・14 HOURS AGO
FastBreak on FanNation

De'Aaron Fox has been ruled out for Saturday's game between the Sacramento Kings and Milwaukee Bucks.
NBA・13 HOURS AGO
FastBreak on FanNation

The Milwaukee Bucks are hosting the Sacramento Kings on Saturday night in Wisconsin.
NBA・14 HOURS AGO
FastBreak on FanNation

Giannis Antetokounmpo is ruled out for the game between the Sacramento Kings and Milwaukee Bucks on Saturday night.
NBA・14 HOURS AGO

The NBA has announced that Kyrie Irving has been fined $25,000 for an interaction with a fan during the Brooklyn Nets loss to the Cleveland Cavaliers on Monday.
NBA・2 DAYS AGO
FastBreak on FanNation

Here's What Alex Caruso Tweeted After The Bulls Beat The Cavs

The Chicago Bulls beat the Cleveland Cavaliers in Illinois on Wednesday evening.
NBA・2 DAYS AGO
FastBreak on FanNation

The Golden State Warriors lost to the Indiana Pacers at home on Thursday night, and after the game Steph Curry spoke to the media.
NBA・1 DAY AGO
FastBreak on FanNation

Grayson Allen got ejected during the game between the Chicago Bulls and Milwaukee Bucks for a flagrant foul on Alex Caruso.
NBA・1 DAY AGO
USA TODAY

Luka Doncic has many of the same flaws as Russell Westbrook but gets far less criticism. He may not be able to outrun it much longer.
NBA・1 DAY AGO
95.7 The Game