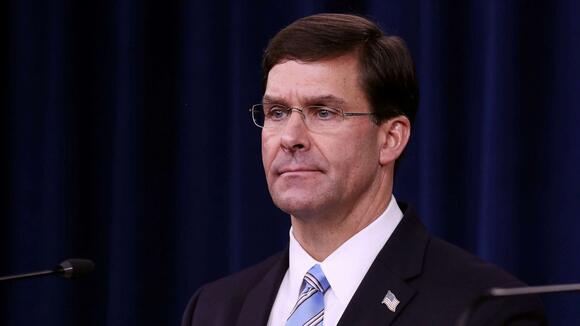 Former Secretary of Defense Mark Esper, who served under former President Donald Trump until his firing in the wake of the 2020 election, has sued the Department of Defense over redactions they made to his upcoming book.

Esper's memoir, set to be released in May of 2022, is expected to chronicle his time in the Trump administration, in which he served first as Secretary of the Army and then as Secretary of Defense until Trump tweeted about his firing on Nov. 9, 2020, following weeks of contention .

The lawsuit, filed in the U.S. District Court in Washington on Sunday, said that Esper engaged in "extensive coordination" with the Department's Office of Pre-publication and Security Review.

Esper alleges the review "dragged on" for six months and when he finally heard back on Oct. 7 after reaching out in May, there was no explanation given for some redactions.

"No written explanation was offered to justify the deletions," Esper wrote in an e-mail to current Defense Secretary Lloyd Austin. "My follow-on conversations with the DOPSR official handling my case confirmed my assessment. He similarly has been unable to assert that the redacted items contain classified information or compromise national security."

Esper said he was asked not to quote his conversations with Trump or other foreign officials, although much of the material "was already in the public domain," according to Esper.

His attorneys argue in the lawsuit that the Defense Department "has unlawfully imposed a prior restraint upon Mr. Esper by delaying, obstructing and infringing on his constitutional right to publish his unclassified manuscript entitled 'A Sacred Oath.'"

The former defense secretary also said he had already met with Austin's chief of staff and the Defense Department's Director of Administration and Management, Mike Donley.

MORE: Defense secretaries' letter warning Trump was signed by all in only 2 days

"I should not be required to change my views, opinions, or descriptions of events simply because they may be too candid at times for normal diplomatic protocol. After all, the DOPSR process is about protecting classified information and not harming national security -- two important standards to which I am fully committed. Moreover, my Constitutional rights should not be abridged because my story or choice of words may prompt uncomfortable discussions in foreign policy circles," he said in the suit.

"We are aware of Mr. Esper’s concerns regarding the pre-publication of his memoir. As with all such reviews, the Department takes seriously its obligation to balance national security with an author’s narrative desire. Given that this matter is now under litigation, we will refrain from commenting further," Kirby said.

In a memo reported first by ABC News Chief Washington Correspondent Jonathan Karl in his new book "Betrayal," the Presidential Personnel Office under the direction of John McEntee, a favorite aide of Trump, made a case for firing Esper three weeks before Esper was terminated.

Reasons outlined for his firing in the memo included that Esper "barred the Confederate flag" on military bases, "opposed the President's direction to utilize American forces to put down riots," "focused the Department on Russia," and was "actively pushing for 'diversity and inclusion.'"

Amid reports of hostility between Trump and DeSanits, a spokesperson for the Republican governor told Newsweek such talk is a "fabricated media narrative."
POTUS・2 DAYS AGO
Washington Post

Welcome to The Technology 202, where we′ll strive each day to channel this federal judge′s wordsmithing skills in our leads. Below: That wordsmith rejects Facebook′s motion to dismiss a federal antitrust case, and a top Biden telecom official is confirmed. First:. Former GOP lawmaker offers rare defense...
PRESIDENTIAL ELECTION・8 DAYS AGO
austinnews.net

Katrina Pierson allegedly made the remark in text messages obtained by the January 6 Select Committee.
PRESIDENTIAL ELECTION・14 HOURS AGO
POLITICO

The most successful line of attack against a potential Trump 2024 candidacy will likely come from the populist right.
FLORIDA STATE・16 HOURS AGO
The Guardian

A former member of the Obama administration pushed back after President Biden brushed aside a question from a Fox News reporter about allowing Russian President Vladimir Putin to make the first move in Ukraine and called it "stupid." "It isn't a stupid question," former Obama Director of Global Engagement Brett...
PRESIDENTIAL ELECTION・11 HOURS AGO

The order paves the way for 700 documents related to the events of January 6 to be transferred to the committee.
CONGRESS & COURTS・1 DAY AGO
POLITICO

It carries big consequences for other challenges to the panel's work. Here's the latest: A federal judge rejected an effort by Donald Trump spokesperson Taylor Budowich to force the Jan. 6 select committee to return his financial records, which were subpoenaed from J.P. Morgan. The panel obtained the records last...
CONGRESS & COURTS・16 HOURS AGO

Mitch McConnell caused many jaws to drop on Twitter when he responded to a question from a journalist about concerns of voters of colour.The Senate minority leader was speaking alongside members of Republican leadership at a press conference on Wednesday evening when he was asked by Latino Rebels correspondent Pablo Manriquez about his message to voters afraid that without voting access protections that would be in place if the Democrats’ voting rights legislation were to pass, they will be unable to vote.His response elicited a wave of criticism on Twitter for a choice of words that appeared to establish...
CONGRESS & COURTS・12 HOURS AGO
Newsweek

Kyrsten Sinema's Ex-Staffer 'Ashamed' To Have Worked for Her

Sinema was one of the two Democrats who in the Senate on Wednesday night voted against weakening the filibuster to pass elections and voting reform.
CONGRESS & COURTS・21 HOURS AGO
Business Insider

A $1.8T Build Back Better compromise Manchin offered the White House in December is off the table. "We'll just start with a clean sheet of paper."
PRESIDENTIAL ELECTION・14 HOURS AGO

In a blow to former President Donald Trump, the Supreme Court ruled that the House select committee investigating the riot could be handed his White House papers.
CONGRESS & COURTS・1 DAY AGO
Daily Mail

'I am not vaccinated or boosted': Republican Rep. Thomas Massie, 51, reveals he has tested positive again for COVID-19

Republican Rep. Thomas Massie revealed Thursday that he's tested positive again for COVID-19. 'I will not be voting, meeting in person, or making public appearances until next week. I am not vaccinated or boosted,' the 51-year-old congressman disclosed. 'If trolls or media have other questions about my health status, the answer is most likely, "NUNYA."'
CONGRESS & COURTS・18 HOURS AGO
mediaite.com

During a press on Wednesday afternoon, President Joe Biden expressed amazement at the hold Donald Trump still has over the Republican Party. Nancy Cordes of CBS noted that Senate Minority Leader Mitch McConnell said this year’s midterm elections will be a “report card” on Biden’s progress. She asked the president how he thinks that report card looks.
U.S. POLITICS・1 DAY AGO
Newsweek

President Biden has said that Vice President Harris is "doing a good job" and would be on the presidential ticket.
PRESIDENTIAL ELECTION・21 HOURS AGO