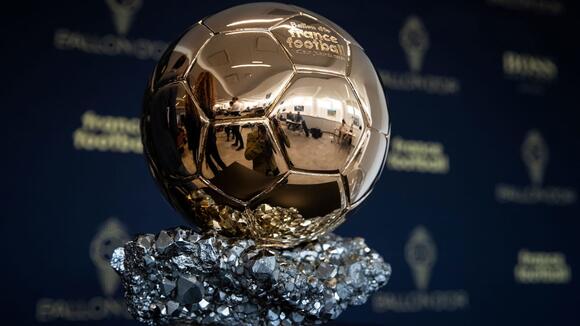 The 2020 edition was canceled on account of the pandemic, likely robbing Robert Lewandowski of what would have been his first award after a Champions League-winning season with Bayern Munich. The Polish striker was very much in the mix for the 2021 men's award, though, finishing second, while Jorginho, who won the Champions League with Chelsea and Euros with Italy, finished third. Cristiano Ronaldo finished out of the top three for the first time since 2010, winding up sixth in the voting.

The voting was conducted by journalists around the world, who pick a first-, second- and third-place finisher that they determine based on individual and collective honors (statistics, titles won, etc.), player talent and fair play and an overall view of the player's career. So while it is ostensibly meant to honor the best player of the calendar year, a wider scope can be taken when selecting the winner.

France Football slowly unveiled the top 30 in the men's award voting throughout the course of the day, leading up to the main event in the French capital. Here is the final result:

It was basic arithmetic, really. In the same way that two plus two equals four, an almost impregnable defence plus a prolific, 20-goals-a-season striker equals a title-winning team.Two Premier League clubs found themselves stuck on the first side of that equation last summer. Each had one of the best defences in Europe but lacked a player regularly converting at the other end. Both intended to do something about it during the transfer window. One could and did, the other tried and couldn’t. So in that case, why is the team who didn’t spend £97.5m on a centre-forward sitting at the...
PREMIER LEAGUE・2 DAYS AGO

MANCHESTER CITY legend Pablo Zabaleta has revealed how his ex-team-mates joked they'd be playing alongside Cristiano Ronaldo and Lionel Messi after the takeover. The Premier League side became one of the richest clubs in world football overnight when billionaire Sheikh Mansour purchased the club in 2008. They wasted no time...
PREMIER LEAGUE・2 DAYS AGO
goal.com

Revealed: Who Ronaldo and Messi voted for in The Best FIFA Men's Player Award

Manchester City increased their lead at the top of the Premier League table to 13 points as Kevin De Bruyne’s strike earned the defending champions a 1-0 win over second-placed Chelsea. City dominated possession in the first half but Jack Grealish was denied an opening goal when Kepa Arrizabalaga blocked his shot with an outstretched leg. Romelu Lukaku went close after the break but saw a curling effort saved by Ederson. The hosts took the lead in the 70th minute when De Bruyne curled in an excellent strike past Kepa from outside of the box, Chelsea continued to struggle to...
PREMIER LEAGUE・2 DAYS AGO
San Diego Union-Tribune

Manchester City hero Pablo Zabaleta has spoken of the first days of Sheikh Mansour's takeover. Zabaleta has revealed how his ex-team-mates joked they'd be playing alongside Cristiano Ronaldo and Lionel Messi after the takeover. The Premier League side became one of the richest clubs in world football overnight when billionaire...
PREMIER LEAGUE・2 DAYS AGO
The Independent

The Etihad Stadium plays host to the top of the table Premier League clash between Manchester City and Chelsea this afternoon. City are first in the league with Chelsea second coming into this game, but with completely different form in the competition. Chelsea will be hoping to end their poor run, but they will take inspiration from some promising displays in the Carabao Cup. Today’s match is Chelsea’s second against City in the league this season and their last chance to peg the reigning champions back in their pursuit of the title.Follow Man City vs Chelsea LIVECity will be...
PREMIER LEAGUE・2 DAYS AGO
Valdosta Daily Times

ZURICH (AP) — Robert Lewandowski was voted the best men’s player in the world, retaining the FIFA award he won last year. The Bayern Munich forward overturned the result last month of the Ballon d’Or prize where he placed second behind Lionel Messi, who finally led Argentina to a senior title at the 2021 Copa América.
FIFA・6 HOURS AGO
The Independent

Ralf Rangnick has encouraged Manchester United’s players to hold each other to account after Cristiano Ronaldo warned their poor season will continue if their mentality does not improve.Having edged past Aston Villa 1-0 in the FA Cup third round on Monday, the sides will go toe-to-toe once again in the Premier League on Saturday evening.United enter the weekend seventh in the standings after things unravelled following a positive summer in which Jadon Sancho Raphael Varane and Ronaldo arrived.The latter this week said they need to start afresh in 2022 and warned “it will be a nightmare” if they do...
PREMIER LEAGUE・2 DAYS AGO

The final installment of the football awards season took place at FIFA headquarters in Zurich on Monday with FIFA's The Best awards. The other major awards — Ballon d'Or, the Globe Soccer awards and the UEFA player awards — all took place in recent months. And Bayern Munich...
UEFA・4 HOURS AGO
The Independent

Cristiano Ronaldo and Lionel Messi were both included in the men’s world XI team of the year alongside Erling Haaland and Robert Lewandowski – winner of the men’s individual prize – in a front four.Fifpro’s 2021 team crowbarred in the attacking quartet, with a back three of Manchester City’s Ruben Dias alongside Bayern Munich’s David Alaba and Euro 2020 winner Leonardo Bonucci. Dias’s City teammate Kevin De Bruyne was named in midfield alongside Jorginho and N’Golo Kante. Meanwhile Barcelona players were surprisingly omitted from the women’s team, despite Barca and Spain midfielder Alexia Putellas winning the women’s player of the...
FIFA・6 HOURS AGO
The US Sun

RIO FERDINAND made the bold decision to exclude 2021 Ballon d'Or winner Lionel Messi from his Team of the Year - picking Cristiano Ronaldo instead. The former Manchester United star argues Messi has dipped in form since his summer move to Paris Saint-Germain - the Argentine has just six goals and five assists for the French side.
PREMIER LEAGUE・2 DAYS AGO
The Independent

A goal fit to win any match, and that has almost certainly won the 2021-22 Premier League title. Kevin De Bruyne’s sublime strike was a moment that suitably reflected Manchester City’s superiority, putting the defending champions 13 points clear of Chelsea after this 1-0 victory. As if to similarly emphasise how some of that lead has been down to rivals’ own failings, Kepa Arrizabalaga might have done better for the goal. That shouldn’t be to take away from De Bruyne’s strike, or City’s quality. As with the huge gap at the top of the table, and despite the narrow victory,...
PREMIER LEAGUE・2 DAYS AGO
Sports Illustrated

Robert Lewandowski took home his second straight award, but one star competitor left him off the ballot completely.
UEFA・4 HOURS AGO
The Independent

Pep Guardiola has hailed the mentality and professionalism of his Manchester City players after taking a seemingly vice-like grip on the title race.The City manager is impressed by how his team have dealt with adversity on and off the pitch to maintain their charge towards a fourth Premier League success in five years.In making his point, Guardiola cited the example of full-back Joao Cancelo who suffered facial injuries in an attack at his home last month.Cancelo has started all three of City’s games since, helping them come through a tough period in which they have been badly hit by...
PREMIER LEAGUE・1 DAY AGO
The Independent

Kevin De Bruyne insists there can be no easing up now after firing Manchester City closer to another Premier League crown with a superb winner against Chelsea.The Belgian playmaker produced a moment of magic 20 minutes from time to settle a tight battle between the title rivals at the Etihad Stadium on Saturday.It was a potentially decisive blow in the race, lifting the champions 13 points clear of the Londoners at the top of the table.Regardless of whether Liverpool can cut into the lead – the Merseysiders have played fewer games and still have to visit City – it would...
PREMIER LEAGUE・1 DAY AGO