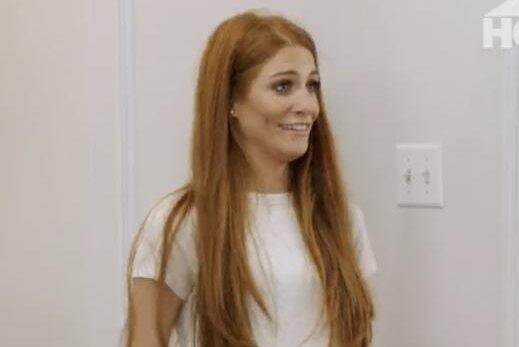 The network confirmed Sunday on Twitter that it renewed the home renovation series for Season 2.

"Get excited! A new season of #NoDemoReno with Jenn Todryk is coming to HGTV in 2022. Season two starts filming in January and we can't wait!" the post reads.

No Demo Reno follows Jenn Todryk, aka The Rambling Redhead, as she undertakes major home renovation projects without massive demolition.

"No Demo Reno is doin' it again y'all on @hgtv," Todryk wrote. "Can't wait to take y'all behind the scenes with me once again! Filming is planned to start end of January. Is making y'all wait a year for season two long enough?"

"Feeling insanely blessed that I have y'all to do this journey with," she added. "Y'all will never understand how much this community encourages me through these endeavors. I am beyond grateful for y'all!"

No Demo Reno premiered on HGTV in January.

Paramount+ has just re-upped much of its current “Star Trek” line-up, even with several having not yet aired or finished their latest run. Flagship series “Star Trek: Discovery” has been renewed for a fifth season. The series is currently on break and returns with the back half of the fourth season from February 10th.
TV SERIES・7 DAYS AGO
Popculture

HGTV Reveals Renewal Fate of 'Help! I Wrecked My House'

There are many more disastrous do-it-yourself projects that need home renovation expert Jasmine Roth's help, so it's a good thing that HGTV renewed her series Help! I Wrecked My House for another season. The show will be back for a 10-episode third season in fall 2022. Roth shared the news herself on Instagram, with her adorable daughter Hazel Lynn playing a supporting role.
TV SERIES・5 HOURS AGO
tvseriesfinale.com

Promised Land: Season Two? Has the ABC TV Series Been Cancelled or Renewed Yet?

Airing on the ABC television network, the Promised Land TV show stars John Ortiz, Cecilia Suárez, Augusto Aguilera, Christina Ochoa, Mariel Molino, Tonatiuh Elizarraraz, Andres Velez, Katya Martín, Rolando Chusan, and Bellamy Young. Yul Vazquez, Julio Macias, Ariana Guerra, Kerri Medders, Tom Amandes, Natalia del Riego, and Miguel Angel Garcia recur. The story revolves around two Latinx families vying for wealth and power in California’s Sonoma Valley. Joe Sandoval (Ortiz) is the patriarch of his family who took a small vineyard owned by a former rival and turned it into a wine and beverage empire, Heritage Vineyard. Along the way, he alienated many — including members of his own family. More than just a savvy corporate fighter, Joe can do every job there is to do on a vineyard, but finds himself at a crossroads when an enemy from his past resurfaces. His wife, Lettie (Suarez), will do anything to keep her family intact, despite all its fraying allegiances. Their children are highly capable Veronica (Ochoa), estranged Antonio (Tonatiuh), party-girl Carmen (Molino), erratic Junior (Garcia), and stepson Mateo (Aguilera), the hardworking and highly capable general manager of the vineyard. Meanwhile, immigrants Carlos (Velez), Billy (Chusan), Juana (Martin), and Rosa (Guerra) cross the Mexican border in search of a better life.
TV SERIES・1 DAY AGO
tvseriesfinale.com

CBS is sticking with Samantha, Jay, and their deceased housemates for the 2022-23 season. The Ghosts series has been renewed for a second season on the network. A single-camera supernatural comedy series, the Ghosts TV show stars Rose McIver, Utkarsh Ambudkar, Brandon Scott Jones, Richie Moriarty, Asher Grodman, Rebecca Wisocky, Sheila Carrasco, Danielle Pinnock, Roman Zaragoza, and Devan Chandler Long. Freelance journalist Samantha (McIver) and Jay (Ambudkar), an up-and-coming chef, are a couple from the city. They throw caution (and their money) to the wind when they decide to convert a huge rundown country estate they inherited into a bed & breakfast. They discover the hitch is that it’s inhabited by many spirits of deceased residents. The departed souls are a close-knit, eclectic group but, if they were anxious about the commotion that a renovation and a B&B would create in their home, it’s nothing compared to what happens when they realize that Samantha is the first live person who can see and hear them.
TV SERIES・2 DAYS AGO

After Life Season 4: Renewed or Cancelled?

After Life’ is a comedy-drama series that revolves around Tony Johnson, a journalist and head features writer at the local newspaper in the fictional town of Tambury. He leads a largely happy life with his wife Lisa and dog Brandy. However, after Lisa’s death due to breast cancer, Tony’s grief takes him on a dark path. He is perpetually angry at the world, lives with depression, and has suicidal thoughts.
TV SERIES・12 DAYS AGO
tv-eh.com

Corus Studios kicks off the new year with its latest greenlight, Renovation Resort (7×60), bringing together two of HGTV Canada’s biggest names in real estate and construction, Scott McGillivray and Bryan Baeumler, for the first time in one show. The seven-part competition series, produced by McGillivray Entertainment, is slated for production this summer and set to premiere on HGTV Canada in Spring 2023. Corus Studios will distribute the series internationally.
TV SERIES・14 DAYS AGO
MySanAntonio

"Rock the Block" is one of HGTV's most ambitious shows. Four teams of the network's top design stars face off against one another. The experts attempt to add value to identical properties in the same metro area, with only four weeks to complete their projects. And with design gurus plying...
TV & VIDEOS・4 DAYS AGO
justjaredjr.com

Peacock Renews 'One of Us Is Lying' For Season 2!

One of Us Is Lying is coming back for a second season!. Peacock just revealed the exciting news that the drama series has been renewed. The show is based on Karen M. McManus‘ best-selling novel of the same name and tells the story of what happens when five high schoolers walk into detention and only four make it out alive. Everyone is a suspect, and everyone has something to hide.
TV SERIES・12 DAYS AGO

Archive 81 season 2: Is it renewed, canceled at Netflix?

Following its big premiere today, is there a chance at an Archive 81 season 2 renewal at Netflix? Or, should we expect this to be the end of the road? There’s always a lot to talk about when it comes to a show like this, so we’re diving right in through the rest of this article.
TV SERIES・12 DAYS AGO
celebritypage.com

Season 1 of 'Ghosts' was first released on CBS in October 2021. CBS just recently announced the return of 'Ghosts' with a second season in 2022-23! Although the exact release date is yet to be announced, fans are excited to hear the news of the return of the show. Stars...
TV SERIES・6 HOURS AGO
tvseriesfinale.com

Big City Greens returns to Disney Channel for its third season next month but that won’t be the end of the animated show’s characters. Disney has renewed the series for a fourth season and has also ordered a movie musical. Created by Chris and Shane Houghton, the animated...
TV & VIDEOS・3 DAYS AGO
tvseriesfinale.com

Those wacky creatures will return to The CW for the 2022-23 television season. The network has renewed World’s Funniest Animals for a third year. A comedy clips series, the World’s Funniest Animals TV show takes a look at the world of animals as these pets — and sometimes, their owners — do funny things that are caught on video. The series includes viral Internet clips of funny animal moments, humorous animal clips from big-budget movies and favorite TV series, unexpected outtakes, videos of babies and their four-legged friends, as well as celebrities and their pets. Host Elizabeth Stanton introduces the clips and panelists like Brian Cooper, Mikalah Gordon, Maiara Walsh, Neel Ghosh, Brandon Rogers, Carmen Hodgson, and Noah Matthews provide commentary. In season two, celebrity guests include Colin Mochrie, Molly McCook, Parker Bates, Amara Zaragoza, and. Robert Englund.
ANIMALS・5 DAYS AGO
UPI News

Jan. 26 (UPI) -- FX and Hulu gearing up for the Snowfall Season 5 premiere. Hulu shared a teaser for the season Wednesday on Twitter featuring Damson Idris as drug kingpin Franklin Saint. The promo, titled "On the Edge," shows Franklin (Idris) take an elevator up to the roof of...
TV SERIES・7 HOURS AGO
thecurrent-online.com

The name of Shyamalan is associated by many viewers with the sensational “Sixth Sense”, which laid the foundation for the emergence of mystical thrillers. The last work of the author, entitled “Old”, turned out to be no less intriguing and action-packed, even if it received mixed ratings.
TV SERIES・7 DAYS AGO
tvseriesfinale.com

The exploits of the U.S.S. Cerritos crew will continue. Paramount+ has announced that season three of the Star Trek: Lower Decks TV show will debut at some point this summer. In addition, the animated series has already been renewed for a fourth season of 10 episodes. Star Trek: Lower Decks...
TV SERIES・7 DAYS AGO
tvseriesfinale.com

Single Drunk Female: Season Two? Has the Freeform Comedy Series Been Cancelled or Renewed Yet?

Airing on the Freeform cable channel, the Single Drunk Female TV show stars Sofia Black-D’Elia, Ally Sheedy, Rebecca Henderson, Sasha Compère, Lily Mae Harrington, and Garrick Bernard with Jojo Brown, Charlie Hall, Madison Shepard, Ian Gomez, Madeline Wise, and Jon Glaser in recurring roles. After a public flame-out at a New York media company, twenty-something alcoholic Samantha Fink (Black-D’Elia) is forced to seize the only chance she has to sober up and avoid jail time — by moving back home with her overbearing “smother”, Carol (Sheedy). Back in Greater Boston, Samantha restarts her life, working at the local grocery store while surrounded by all of the triggers that made her drink in the first place. Confronted with remnants of her old life, Samantha sets out on a path to move past her worst self and figure out her best self. Mostly.
TV SERIES・2 DAYS AGO
TVLine

Ghosts is in no danger of getting ghosted by CBS: The network has renewed the freshman comedy for a second season. CBS also handed out early renewals to Monday sitcoms The Neighborhood and Bob Hearts Abishola, for Seasons 5 and 4, respectively. The trio join Young Sheldon, which was previously renewed for three additional seasons (through spring 2024). TVLine’s 2022 Renewal Scorecard has been updated to reflect the pickups. Season-to-date, Ghosts — which snagged a full-season order from CBS back in October — is averaging 8.1 million total viewers and a 0.9 demo rating (with Live+7 DVR playback factored in), marking the TV...
TV SERIES・2 DAYS AGO
HipHopDX.com

The money challenge has taken social media by storm over the last several days. A sizable roster of rappers and celebrities have participated in the challenge in a plethora of ways — whether they’re using actual cash to spell out a phrase or making a point by using toilet paper to spell out things such as “IRS Watching.”
CELEBRITIES・1 DAY AGO
Newsweek

"NCIS: Hawai'i" may not have officially crossed over with "NCIS" yet, but the last episode revealed a connection between Jane Tennant and Leroy Jethro Gibbs.
TV SERIES・1 DAY AGO