Shining a light in the darkness: The Jewish holiday of Hanukkah begins 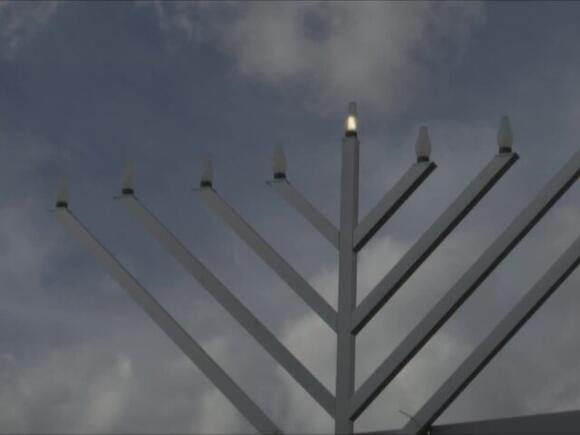 The holidays are here, and Sunday is the first day of the Jewish holiday, Hanukkah.

In Hebrew, menorah means “lamp”, so for eight nights in a row, people who practice Judaism light one of the menorah's eight candles and celebrate the story of Hanukkah.

What is traditionally known as a home holiday, Jewish people celebrate the holiday on the 25th of the Jewish calendar month known as Kisplef.

It is not the Jewish version of Christmas; it is a celebration of what is known as the miracle of Hanukkah.

The story of Hanukkah begins with Jewish men defeating the Greeks.

“The miracle of Hanukkah dates back about 24-hundred years ago. It commemorates a group of very brave men who rose up against the Greeks. They have overrun the ancient land of Israel and the temple and placed terrible restrictions on the Jewish religion,” said Rabbi Chezky, of the Chabad Jewish Center in Missoula.

The men reclaimed the temple and in order to rededicate it, they needed pure olive oil as part of the holy ceremony to light the menorah.

“They did find one cruz of pure olive oil,” Rabbi Chezky told MTN News. “Which was only enough to last for one day, but it miraculously burned for eight days, which was enough to get them exactly enough time to burn more oil.”

The main message of Hanukkah is hope—shining a light in the midst of darkness.

“I think Hanukkah has become really important to American Jews because it’s such an affirmation of identity at a time when all commercial activity is so focused on Christmas," said Rabbi Laurie Franklin of Har Shalom in Missoula . "And frankly, I don’t need Hanukkah commercial activity. To me, it’s the beauty of the lights and the wonder of the lamps, in the middle of the darkness, this time of year.”

Replace anger’s darkness with the light of hope

Once you get over the shock of receiving a cancer diagnosis and you exhaust all the “why me?” questions that no one can answer, you are going to experience multifaceted levels of anger. The first reaction for some is to lash out at God. That typically rides into...
HEALTH・13 DAYS AGO
mainernews.com

“To do righteousness and justice is more acceptable to the Lord than sacrifice.”. As we enter the New Year, I am thinking about change. I suppose I’m always thinking about change, but at this time of year I feel a little less alone. Some people are thinking about changing their daily routine or their job. Others are debating a new exercise regimen. Yet it feels like there is a growing number of people who are finally starting to think, speak, and act a little deeper about their relation to change. And their responsibility to change.
RELIGION・11 DAYS AGO
yukonprogressnews.com

Yukon ready to ‘Light Up the Darkness’

Five Yukon-area churches have joined forces to help people stay warm and bright during a cold, dark winter. “We’re working together to show God’s light to others,” said Lori Barthelmes, Resurrection Lutheran Church’s minister to children, youth and families. “This time of year, we know many...
YUKON, OK・10 DAYS AGO
USA TODAY

What is Tu BiShvat? Everything to know about the Jewish holiday that celebrates nature

It may be winter in the U.S., but in Israel, spring is just beginning. The annual Jewish holiday Tu B’Shevat honors this moment in time.
FESTIVAL・11 DAYS AGO

Associated Ministries announcement. A 4-part online series addressing aspects of Native American Justice from a faith-based perspective has been developed and will be presented by Rev. Irvin Porter, Pastor of Church of the Indian Fellowship, beginning Tuesday, Jan. 25, 6:30-8:30 p.m. There is no cost to attend. Session topics include:
TACOMA, WA・1 DAY AGO
mymodernmet.com

Imagine spending hours pouring over a dusty old book, painstakingly copying the text word for word onto a new page in a blank volume. This laborious process was necessary in the Middle Ages and Early Renaissance. Before the introduction of moveable type in Europe during the 15th century, books were written out in ink by hand. These books are called manuscripts, derived from the Latin manuscriptus. Manu means “by hand” and scriptus means “written.”
BOOKS & LITERATURE・1 DAY AGO
maldenblueandgold.com

During the holidays, areas all over Malden have decorations that make the city all the more festive. Churches decorated with their nativity scenes, squares and parks put up bright trees, and some places even do both. The Holiday Season of 2021 had so much beauty to offer, so here is a slight taste.
MALDEN, MA・3 DAYS AGO
Shreveport Magazine

A pastor went a little too far during his recent sermon after rubbing his spit across the face of an attendee. Now, the Oklahoma priest is apologizing for his “too live” action on stage. The sticky situation occurred on Sunday as Transformation Church Pastor Michael Todd began preaching...
RELIGION・2 DAYS AGO

Light during dark times at the Dietrich

“What topics would you like to hear and see more about?” asked Chris Norton, Senior Vice President of WVIA, at the preview last Su
YOGA・11 DAYS AGO
Andrei Tapalaga

The 1st-century house at the Sisters of Nazareth site. It may have been the childhood home of Jesus ChristKen Dark. History from biblical times is considered to be the most interesting within this subject due to the tales from the bible. To some the scriptures presented within the bible are tales, but for Christianity, they have been leading the lifestyles of billions for the past 2,000 years. Just as mentioned within the bible, we knew that Jesus was born in Zahareth, but the exact location was not specified.
15 HOURS AGO
thepitchkc.com

The Darkwood House Gallery is a home for Kansas City’s beautiful and weird. And the really weird. The Independence-based art space (10916 E Winner Road) specializes in the often-overlooked dark art and strives to give a platform to artists who may otherwise go unseen. Darkwood House gallerist and artist...
KANSAS CITY, MO・5 DAYS AGO
Daily Mail

The Nazi party girls of Auschwitz: SS women romanced and caroused with death camp guard lovers as they oversaw the murder of thousands of Jews - before paying the ultimate price on the gallows

The biographies of over 200 SS women serving at Auschwitz death camp and their 'after work parties' have been published online in an effort to show the world that it wasn't just men involved. Entitled 'Women working for the SS', the project from the Auschwitz-Birkenau State Museum documents the women's...
POLAND・4 DAYS AGO
The Independent

Former pope was at meeting where pedophile priest discussed

Retired Pope Benedict XVI has acknowledged that he did attend a 1980 meeting at which the transfer of a pedophile priest to his then-diocese was discussed, saying an editorial error was responsible for his previous assertion that he wasn't there.Authors of a report on sexual abuse between 1945 and 2019 in the Munich archdiocese, which Benedict — then Cardinal Joseph Ratzinger — led from 1977 to 1982, on Thursday faulted his handling of four cases during his time as archbishop and said his claim that he wasn't at the meeting lacked credibility.Benedict, who provided lengthy written testimony, denies...
RELIGION・1 DAY AGO
The Independent

More than 120 employees of the Catholic Church in Germany publicly outed themselves as queer on Monday, saying they want to “live openly without fear" in the church and pushing demands for it to allow the blessing of same-sex couples and change its labor rules.A group of 125 people — including priests, religion teachers and administrative employees — identified themselves as backers of the initiative titled “#OutInChurch — For a church without fear.”In a document last March, the Vatican’s orthodoxy office, the Congregation for the Doctrine of the Faith, said Catholic clergy cannot bless same-sex unions because God “cannot...
RELIGION・21 HOURS AGO
FOX 13 News

David Archuleta is in agony but ready to live a more authentic life as a gay man.
ENTERTAINMENT・1 DAY AGO
Fort Wayne Journal Gazette

AMSTERDAM – A cold case team that combed through evidence for five years in a bid to unravel one of World War II's enduring mysteries has reached what it calls the “most likely scenario” of who betrayed Jewish teenage diarist Anne Frank and her family. Their answer,...
WORLD・7 DAYS AGO
lionsdigest1.com

Every year Christmas comes and goes, and with that, the Christmas lights go up, then slowly come back down. Over the past few years, Park Forest residents have been creating increasingly elaborate Christmas light displays. The intricately coordinated Christmas decorations have gained the attention of State College residents, and on Devonshire Drive, residents Sylvia and Mike Rushing put up a beloved display every year.
STATE COLLEGE, PA・14 DAYS AGO
Record-Courier

A Garrettsville family was one of two winners in The Holiday Light Trail contest sponsored by Vincent Patrick Realty of Garrettsville. More than 89 houses from around northeast Ohio participated in the contest. Voting was active between Dec. 18-29 and more than 790 votes were cast, with one vote per person.
GARRETTSVILLE, OH・12 DAYS AGO
FOX 11 and 41

Thich Nhat Hanh, the revered Zen Buddhist monk who helped spread the practice of mindfulness in the West and socially engaged Buddhism in the East, has died. He was 95.
RELIGION・2 DAYS AGO