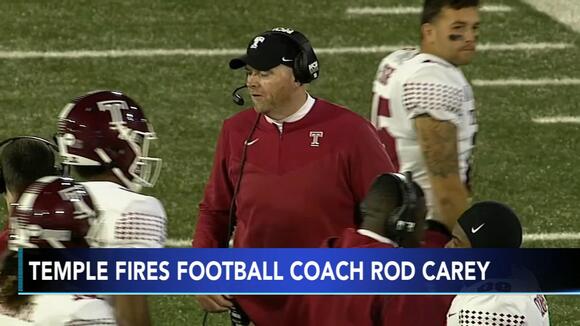 Temple has fired football coach Rod Carey after three seasons, the school announced Monday. The Owls completed a 3-9 season on Saturday with their seventh straight lopsided loss, falling to Navy 38-14. Carey went 12-20 at the Philadelphia-based school after being hired away from Northern Illinois in January 2019. He went just 4-15 over the last two seasons. 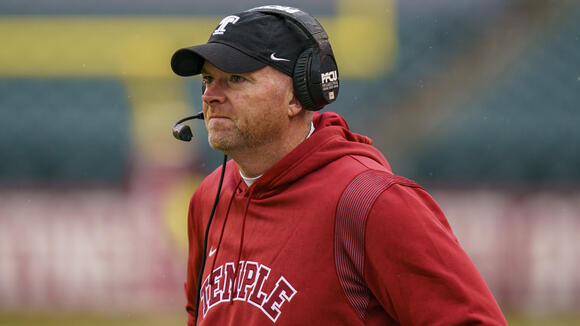 Temple head coach Rod Carey looks on during the second half of an NCAA college football against Houston, Saturday, Nov. 13, 2021, in Philadelphia.

The unusual timing was the result of Manny Diaz taking the Temple job after Geoff Collins left for Georgia Tech, but soon after Diaz was hired by Miami. Carey was 52-30 with six winning seasons in seven years leading NIU, and he guided Temple to an 8-5 record in 2019. But the Owls went 1-6 last year in a season wrecked by COVID-19 issues and then finished tied for last in the American Athletic Conference this year. "I'm thankful to Temple University and the Temple community for my time here," Carey said. "I wish all the student-athletes nothing but success in their lives moving forward. There is a great nucleus of young players here and I'm anxious to watch them play. I will certainly be an Owls fan going forward." Temple also finally hired a replacement for the athletic director who hired Carey earlier this year. Arthur Johnson, a veteran administrator who most recently worked at Texas, was named Temple AD in October. "It's never an easy decision to replace a head coach," Johnson said. "The past two seasons have not been easy with the challenges of the pandemic. I want to thank Rod for staying committed to our student-athletes and wish him and his family well in their next chapter." Assistant coach Thad Ward has been named the program's interim head coach. Temple played in five straight bowl games from 2015 to 2019. ----- The Associated Press contributed to this report.

"I will be an Eagle forever." Philadelphia Eagles guard Brandon Brooks has announced his retirement from football.
NFL・1 DAY AGO
6abc Action News

"We work hard to have a culture that's tight and close-knit, and I think having four sets of brothers reinforces that," said Matt Azevedo, who leads the wrestling program at Drexel.
COMBAT SPORTS・4 HOURS AGO