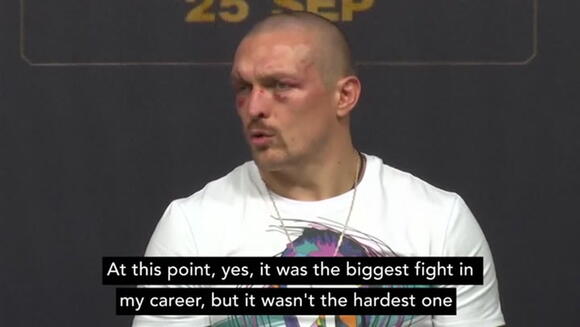 The 32-year-old recently made the decision to unfollow everyone on Instagram and Twitter apart from his sponsors.

But Hearn, who has worked with Joshua since his professional debut back in 2013, has dismissed the idea that they have had any sort of disagreement.

When asked about Joshua’s mass unfollowing, Hearn told iFL TV : “Nothing. I think he’s unfollowed everyone but his sponsors, hasn’t he? Don’t worry, we still talk every day.”

Joshua is currently ticking over as he awaits news on a potential rematch with Oleksandr Usyk - the man who beat him at the Tottenham Hotspur Stadium in September to win the IBF, WBA and WBO titles.

The Brit has adamantly insisted since the defeat that he wants to rematch Usyk straight away. But in an interview last week he hinted he could be open to stepping aside for an Usyk-Tyson Fury undisputed fight if the money was right.

“Let me be real, it’s not about the money, it’s about the respect,” he said. “What I want out of this game, number one is respect. You don’t have to like me, but you will respect me. Second thing is to go down as a throwback fighter, somebody who was willing to fight the best in their division so people know me as a true fighter.

“Step aside in terms of, I don’t know if that goes in line with what I morally stand for. But let me be real, I want to be known as one of the smartest businessmen as well.

“I used to watch Tyson, Holyfield, Bowe, we all know the stories of NFL players, basketball players, they make bad decisions. I wanted to make sure I make the smart moves when it comes to this business. If the money is right, you have to look at it.

“You have to look at it. But respect to me has a lot more value than money. Respect first, what I’m known for when I leave this division, then being the smartest businessman in my career. That step aside thing, it may not go with what I stand for in terms of bringing me respect, fighting the best, but it may make sense for business.”

Tyson Fury has mocked Anthony Joshua and maintains Oleksandr Usyk will “smash” him in their heavyweight world title rematch.Joshua is still destined for shot at winning back the WBA (Super), WBO and IBF titles that Usyk took back in September last year.While Fury continues to wait for the politics of the sport to play out ahead of a probable mandatory title defence against Dillian Whyte, despite purse being bids delayed again.But despite no prospect of Fury and Joshua fighting any time soon, Fury reacted angrily after Derek Chisora tipped Joshua to beat him, with the WBC title holder maintaining...
COMBAT SPORTS・2 DAYS AGO
punditarena.com

Eddie Hearn has promised that Tyson Fury and Anthony Joshua will eventually fight and predicted that the bout could take place as early as this year. Fury and Joshua had been set to face off last August in a bout that was being billed as the biggest British heavyweight boxing fight in history, but those plans were scuppered when a US-based judge decided that Fury must fight Deontay Wilder for a third time.
COMBAT SPORTS・1 DAY AGO
BBC

Eddie Hearn is confident the WBA featherweight super champion belt will be on the line when Leigh Wood fights Michael Conlan in Nottingham on 12 March. The promoter expects Leo Santa Cruz to vacate the title having not fought at the weight in two years. Wood currently holds the sanctioning...
COMBAT SPORTS・9 HOURS AGO
The US Sun

TYSON FURY is in talks for an undisputed decider with Oleksandr Usyk BUT it would mean mega-money step aside promises for Anthony Joshua and Dillian Whyte. AJ, 32, activated his rematch clause after the 35-year-old Ukraine genius schooled him for the WBA, IBF and WBO belts in September. And Brixton...
COMBAT SPORTS・1 DAY AGO

A potential fight between Mike Tyson and Jake Paul in Las Vegas is unlikely to be sanctioned.Former UFC champion Michael Bisping believes that strict rules set by the Nevada State Athletic Commission mean that an exhibition encounter will not be licensed. Paul and Tyson are said to be in discussions over a bout, with organisers hoping a clash between the Youtube personality and former undisputed heavyweight champion could generate £36million if held in the American city.Yet Bisping, a former UFC middleweight champion, does not think it would be approved even as reports suggest a verbal agreement between the pair may...
COMBAT SPORTS・1 DAY AGO
Sportsnaut

Many UFC fans have likely been typing Nate Diaz next fight recently in their MMA Google searches, as they wonder
UFC・1 DAY AGO
The Independent

Rey Mysterio used to fight with his young son for bragging rights when they played wrestling video games together.The WWE high-flying superstar has plenty to boast about now — he's on the cover of the WWE 2K22 video game set for a March 11 release.“It’s a moment of great pride, not just for me, but for the generations that come after me. All my people, all the Latinos ” Mysterio said.Even better, Mysterio is a playable character with his son, Dominik. The younger Mysterio wrestled his first WWE match in 2020 and later became tag-tag team champions with his father.Mysterio...
WWE・10 HOURS AGO
The Independent

Sports stars and clubs across the world continue to provide an insight into their lives on social media.Here, the PA news agency looks at some of the best examples from January 19.TennisAndy Murray served Naomi Osaka a compliment. And she returned it.Anyone put their heart on their sleeve and fight harder than @andy_murray ? 🥺🙏🏾🔥 https://t.co/c6G2SA2Ycx— NaomiOsaka大坂なおみ (@naomiosaka) January 19, 2022Osaka was feeling arty.Lol omg 😂💀 https://t.co/SeYxBn0avu— NaomiOsaka大坂なおみ (@naomiosaka) January 19, 2022Serena had a battle on her hands.[xdelx]Denis Shapovalov struggled with a banana!Sometimes the struggle is real 😅 Sorry, @denis_shapo 🍌#AusOpen • #AO2022• #AOTennis pic.twitter.com/NYtCJkQYss— #AusOpen (@AustralianOpen) January 19, 2022Madison...
TENNIS・1 DAY AGO

Francis Ngannou would relish the opportunity to go head-to-head with Tyson Fury in his next fight.The 35-year-old UFC heavyweight champion faces former team-mate Ciryl Gane in a unification bout in Anaheim California at the weekend, but would take to the octagon with WBC champion Fury having challenged him to a contest wearing MMA’s lighter gloves.Asked if everything goes to plan against Gane whether he would rather face him or defend his title against Jon Jones in his next fight, the Predator told a press conference: “If you give me the two options, I would choose fighting Tyson Fury.One of...
UFC・1 DAY AGO
Robb Report

The robe Muhammad Ali wore before one of the most important fights of his career could soon be yours. The garment the Greatest wore to the final weigh-in and while walking out for his 1965 fight with Sonny Liston is currently up for sale on Goldin Auctions. The robe isn’t just noteworthy because it was worn before the boxer’s second heavyweight title bout, but also because it’s the first that bore the name he’d go by for the final 52 years of his life. Ali wore the robe, which is made of white terry cloth and has “Muhammad Ali” stitched in red...
COMBAT SPORTS・2 DAYS AGO
Sports Illustrated

Moxley will make his return on Wednesday’s “Dynamite”, his first televised appearance in more than two months.
WWE・2 DAYS AGO
Wyoming News

ESPN commentator Stephen A. Smith returned to "First Take" to detail his fight with Covid-19, which he says nearly killed him.
COMBAT SPORTS・2 DAYS AGO

"You ain't trying to hot box with me, I swing hard liquor Going down by the second round, all hail the underground" Xzhibit, "Bitch Please"
COMBAT SPORTS・2 DAYS AGO
Footwear News

Ahead of his heavyweight clash at UFC 270 against Ciryl Gane, Gymshark has revealed a compelling community-focused campaign starring its sponsored power-punching champion Francis Ngannou. The effort, dubbed “United We Sweat,” highlights the shared values between the company and the Cameroon-born mixed martial artist, which is fostering and celebrating community. The first standalone campaign for Ngannou also offers a message of uniting, touches on the power of perseverance and puts the focus on the fighter’s mindset as he heads into the biggest fight of his career. ​​ “Obviously the brand is quality, and the material is very good, I personally use the...
UFC・1 DAY AGO
Sportico

UFC and Dapper Labs announced digital collectible platform UFC Strike on Thursday, with plans to launch and release the first set of NFT packs Sunday. Following UFC 270, UFC Strike will sell 100,000 packs of three digital video moments (for $50 each). The video NFT format has become somewhat familiar since NBA Top Shot’s ascendance last year. But there will be some notable differences this time.  Dapper Labs was able to add broadcast audio to its UFC Strike moments, thanks to UFC’s production control of the company’s events. The collection also features a mixture of men and women fighters—Francis Ngannou, Amanda Nunes,...
UFC・11 HOURS AGO
The Independent

Ciryl Gane’s coach has dismissed Francis Ngannou’s suggestion that sparring footage of the upcoming opponents was edited.Fernand Lopez trained Ngannou prior to the French-Cameroonian’s UFC heavyweight title win last March, and he has continued to coach Gane all the while.Ngannou and Gane used to train together at Lopez’s MMA Factory gym in France, and the former teammates are set to become opponents this month in the main event of UFC 270.Gane carries the interim heavyweight title into the bout, having obtained the gold in August, and the build-up to the contest has been dominated by conversations around sparring footage...
UFC・8 HOURS AGO
Sportsnaut