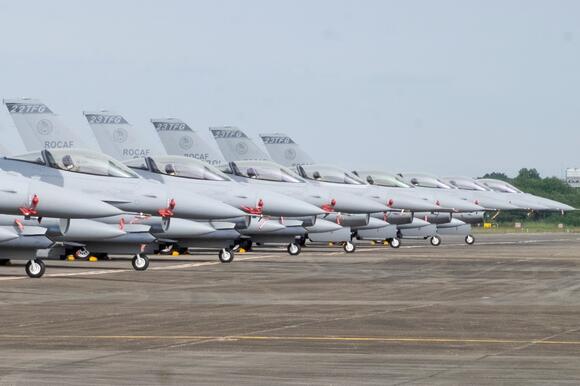 TAIPEI, Taiwan (AP) — Taiwan said 27 Chinese aircraft entered its air defense buffer zone on Sunday, the latest in a long series of incursions as part of Beijing’s pressure on the self-ruled island.

The Defense Ministry said Taiwan scrambled combat aircraft to “warn” the Chinese planes to leave. It also deployed missile systems to monitor them.

The Chinese aircraft flew into Taiwan’s air defense identification zone near the southern part of the island and out into the Pacific Ocean before returning to China, according to a map by Taiwan authorities.

Over the past year, the frequency of Chinese incursions has increased, with about 150 aircraft over a period of four days.

China’s air force mission toward Taiwan came as Chinese President Xi Jinping met with officers at a military conference, where he called for military talent cultivation to support and strengthen the armed forces, according to state-owned news agency Xinhua.

Xi said that talent is imperative in achieving victory in military competition and gaining the upper hand in future wars, according to Xinhua.

China claims democratically ruled Taiwan as its own territory, to be brought under its control by force if necessary. It refuses to recognize the island’s government and has increasingly sought to isolate the independence-leaning administration of President Tsai Ing-wen.

Taiwan and China split during a civil war in 1949, and Beijing opposes Taiwan’s involvement in international organizations.

Weather forecast: Lake flakes for some, bitter cold for all

Your local weather forecast from the team you can trust.
5 HOURS AGO
News 8 WROC

The woman who snapped the photo said the raccoon appeared to be having the time of its life.
ANIMALS・16 HOURS AGO
News 8 WROC

The tradition to make an igloo first started for Merriweather in 2018.
ROCHESTER, NY・12 HOURS AGO
Newsweek

The Chinese Defense Ministry said joint drills "further enriched the connotation of the comprehensive strategic partnership of coordination between China and Russia in the new era."
POLITICS・6 HOURS AGO
Newsweek

China's deployment of J-16D jets into Taiwan's air defence zone this week marked the first sighting of the new high-tech warplanes, Taipei confirmed Tuesday, their electronic-jamming equipment posing a fresh threat to the island.  Among the 13 observed on Monday were two J-16D jets, which the ministry confirmed Tuesday to AFP was the first time the high-tech warplanes had been seen in action.
MILITARY・22 HOURS AGO
The Independent

Seven military personnel were injured after a US warplane suffered a “landing mishap” on the deck of an aircraft carrier in the South China Sea, the US navy has said. The incident happened during routine flight operations while the F-35C warplane was trying to land on the deck of an American aircraft carrier USS Carl Vinson on Monday in the South China Sea. “The pilot safely ejected from the aircraft and was recovered via US military helicopter,” the navy said on Tuesday. “The pilot is in stable condition. There were seven total sailors injured.”Of the seven injured, three were evacuated...
MILITARY・19 HOURS AGO

It marked the largest convoy of aircraft China had sent towards the self-governing island this year.
AEROSPACE & DEFENSE・1 DAY AGO
The Independent

In its latest move to assert power, China has sent 39 warplanes toward Taiwan, the largest of such sorties in the new year.According to Taiwan’s defence ministry, the sortie on Sunday night included 24 J-16 fighter jets and 10 J-10 jets, among other support aircraft and electronic warfare aircraft.The warplanes over Taiwan’s air defence identification zone (ADIZ) came a day after the Navies of US and Japan put on a massive show of strength in the Philippine Sea. It included two US Navy aircraft carrier, two US amphibious assault ships and a Japanese helicopter destroyer.A statement from the US Navy...
AEROSPACE & DEFENSE・1 DAY AGO
The Independent

The US Navy has begun “making arrangements” to recover the wreckage of an F-35C Lightning II jet fighter that slammed into an aircraft carrier during a failed landing, fell off the edge of the flight deck and plunged into the sea. The combat fighter crashed while trying to land on the USS Carl Vinson on Monday, leaving the $100m jet and its stealth technology up for grabs on the bottom of the ocean floor.A spokesman for the 7th Fleet, which is based in Japan, confirmed to The Independent that they had begun planning for the aircraft’s salvage from the...
MILITARY・7 HOURS AGO
Daily Mail

US sends aircraft carriers and assault ships to the disputed South China Sea while Chinese planes - including an anti-submarine Y-8 - continue to lurk in Taiwan's airspace: Island nation reports 13 Chinese planes on Monday

TAIPEI (Reuters) -Taiwan's air force on Tuesday suspended combat training for its F-16 fleet after a recently upgraded model of the fighter jet crashed into the sea in the latest of a series of accidents. The defence ministry said the F-16V, the most advanced type in Taiwan's fleet, went missing...
AEROSPACE & DEFENSE・14 DAYS AGO
AFP

Seven injured in US F-35 incident in South China Sea

Seven US sailors were injured Monday in a Navy F-35C fighter "landing mishap" on an aircraft carrier in the South China Sea, the Navy said. The accident occurred while the F-35C Lightning II, a stealth combat aircraft, was attempting to land on the USS Carl Vinson during routine flight operations, the US Pacific Fleet said in a statement. The pilot of the aircraft was in stable condition after ejecting and being rescued by a helicopter. Seven sailors were injured, three of whom were evacuated to Manila, Philippines for treatment, where their condition was listed as stable.
MILITARY・1 DAY AGO
San Diego Union-Tribune

Separatists in the Donbas region say Kyiv has built up military hardware as President Joe Biden seeks to present a united front against Russia.
POLITICS・21 HOURS AGO
AOL Corp

Poll: As Ukraine tensions escalate, 62% of Republicans say Putin is a 'stronger leader' than Biden

With at least 100,000 Russian troops massing on the border of Ukraine, more than 6 in 10 Republicans and GOP-leaning independents (62 percent) now say Russian President Vladimir Putin is “a stronger leader” than Joe Biden, according to a new Yahoo News/YouGov poll. Fewer than half as many...
PRESIDENTIAL ELECTION・12 HOURS AGO
dailyhodl.com

The Biden administration is reportedly expected to take sweeping action on the digital asset space in the weeks ahead. According to a new Bloomberg report, a number of unnamed insiders reveal that senior administration officials plan to unveil an executive order that will provide details on the regulatory, economic and national security risks posed by digital assets.
U.S. POLITICS・16 HOURS AGO