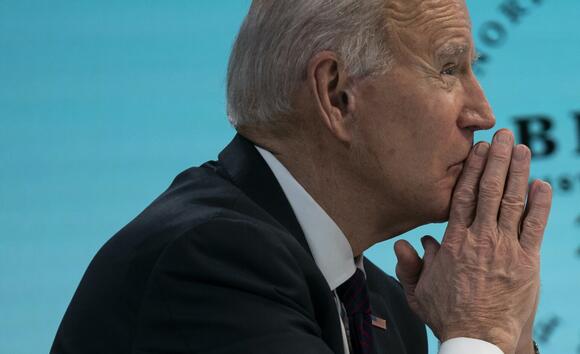 President Joe Biden 's administration announced its 10th round of judicial nominees last week in an aim to fill vacancies left by a pair of retiring judges from the 2nd and 6th Courts of Appeals, continuing a fast-paced trend of nominations to offset the judicial legacy left by his predecessor.

Across the federal court system, a total of 78 vacancies are available for the president to fill as of Nov. 24. The president, along with the support of Senate Majority Leader Chuck Schumer, has already nominated 64 individuals to federal judgeships, with nine confirmations of circuit judges and 19 district judges.

Political pundits see this as Biden's chance to nudge the courts to the left, while the White House has described the president's latest nominations as a continuation of the "promise to ensure that the nation’s courts reflect the diversity."

An apparent urgency to fill judicial vacancies at a rapid pace is due largely to the Democrats' slim hold on the even 50-50 Senate chamber with the vice presidential tiebreaker, as midterm elections are now less than a year out. Republican lawmakers have touted the 2022 midterm elections as a chance to gain back the House and potentially the Senate, giving Biden only a short window to confirm judges uncontested should the opposing party win back the majority in either chamber.

Dan Goldberg, legal director at the Alliance for Justice, told Bloomberg Law in October he thinks "Democrats are very, very clear in what will happen if McConnell becomes majority leader again in 2023.”

Serving as a Delaware senator for more than three decades and leading the Judiciary Committee from 1987-95, Biden is acutely aware of the power federal judges below the Supreme Court level can have in upholding or striking down key elements of a president's agenda.

"President Biden has spent decades committed to strengthening the federal bench, which is why he continues to move rapidly to fill judicial vacancies," a White House official said.

Biden's COVID-19 vaccine-or-test mandate is the latest initiative to face setbacks due to the makeup of the appellate courts, after a three-judge panel on the 5th Circuit, which is considered the nation's most politically conservative, put a stay on the Occupational Safety and Health Administration emergency temporary standard that was set to apply to workplaces employing more than 100 workers on Jan. 4. The somewhat conservative-leaning 6th Circuit was randomly selected on Nov. 16 to hear petitioners' challenges to the mandate and was largely seen as a positive outcome for proponents against the OSHA ETS.

The standing Senate leadership has been strategic in its approach to judicial selections by mostly choosing states with Democratic senators, making opposition to nominees unlikely. Senate Judiciary Chairman Richard Durbin, an Illinois Democrat, has said processing and advancing nominees are priorities for his committee.

Biden nominated Andre Mathis on Nov. 17 to fill an empty seat on the 6th Circuit and U.S. District Judge Alison Nathan for a seat on the 2nd Circuit. If Mathis is confirmed, he would replace retiring Bernice Bouie Donald, an Obama-appointee who was the first black woman to sit on the Cincinnati-based 6th Circuit.

73% of Biden's judicial selections to date have been women, and 27% are African American. Along with keeping up his commitment to diversity, Biden has nominated 14 civil rights attorneys, 20 public defenders, and five labor lawyers in a counter against the traditional professional backgrounds that have often encompassed past judicial appointments.

OK it is time to hear the republicans bitch about stacking the court.McConnell remember you and Trump did it his last month.So I hope Biden doesn't waste one minute.

Trumpublicans thought it was 100 percent fair when they were doing it. Now it's our turn. Can't wait to bath in the tears of republican snowflakes.

The number of immigration cases waiting to be decided in federal court has increased at a faster rate under the Biden administration than under any other president, according to a report published Tuesday by a nonpartisan research organization. Nearly 1.6 million people have cases pending in the U.S. immigration court...
IMMIGRATION・23 HOURS AGO
WashingtonExaminer

Biden is winning on one front: Judicial nominees

President Joe Biden released his 13th round of federal judicial nominations Wednesday, marking another notch in his speedy efforts to appoint judges as he raises the total number of nominees since last January to 83.
PRESIDENTIAL ELECTION・1 HOUR AGO
WashingtonExaminer

Supporters of former president Donald Trump allegedly received orders to march into the Michigan Capitol in Lansing from the Republican leader's campaign.A group of supporters "contemplated" working with a Republican lawmaker who had a Capitol office to get the 16 Trump electors inside the elector room where the official count was taking place, The Detroit News reported."...(W)e convened and organised in the state Capitol, in the city of Lansing, Michigan, and at 2.00 pm Eastern Standard Time on the 14th day of December 2020," said a false certificate signed and submitted to the National Archives.The supporters who signed the documents...
PRESIDENTIAL ELECTION・1 DAY AGO

As Democrats lurch to defeat on voting, it's up to Biden to get his party off the ropes

At least Democrats are reality based. Trump, his devotees and way too much of the Republican Party are from Area 51 or some other planet entirely.
PRESIDENTIAL ELECTION・22 HOURS AGO
Newsweek

The state's top legal officer, a Democrat, wouldn't confirm or deny it was investigating, but said the issue is on its "radar."
NEVADA STATE・17 HOURS AGO
Newsweek

Trump mentioned the death of Champ while chastising the president for spending time at his Delaware home.
PRESIDENTIAL ELECTION・9 HOURS AGO

Biden nominates Muslim woman to the federal bench, a first in US history as he diversifies the judiciary

President Joe Biden's 13th round of federal judge nominations continues the efforts to put more women and judges of color on the bench.
WASHINGTON, DC・12 HOURS AGO
POLITICO

Like his predecessor, more voters gave Biden a failing grade than A's or B's in a new POLITICO/Morning Consult poll.
PRESIDENTIAL ELECTION・11 HOURS AGO
POLITICO

The president ran on his ability to reach across the aisle. Now he's squarely blaming Republicans.
PRESIDENTIAL ELECTION・23 MINUTES AGO
The Independent

President Joe Biden on Wednesday hit out at Republicans for acting to block his agenda without offering any alternative solutions to the problems his administration is trying to address.Speaking at a White House news conference on the eve of his one-year anniversary in office, Mr Biden told reporters he was caught off guard by the vehemence of the GOP’s opposition to anything and everything he has proposed, and by their singleminded effort to ensure his presidency fails."I did not anticipate that there would be such a stalwart effort to make sure the most important thing was that President Biden...
PRESIDENTIAL ELECTION・29 MINUTES AGO

Facing stark criticism from civil rights leaders, senators return to Capitol Hill under intense pressure to change their rules and break a Republican filibuster that has hopelessly stalled voting legislation.The Senate is set to launch debate Tuesday on the voting bill with attention focused intently on two pivotal Democrats — Kyrsten Sinema of Arizona and Joe Manchin of West Virginia — who were singled out with a barrage of criticism during Martin Luther King Jr. Day events for their refusal to change what civil rights leaders call the “Jim Crow filibuster.”Martin Luther King III the son of the...
PRESIDENTIAL ELECTION・1 DAY AGO
WashingtonExaminer

Despite opposition from within their own party, Senate Democrats plan to vote on requiring a “talking filibuster” for those who want to block voting and election overhaul legislation, leadership announced Tuesday.
CONGRESS & COURTS・21 HOURS AGO
WashingtonExaminer

Freshman Rep. Kat Cammack took to the House floor on Wednesday to define the Biden administration’s first year as “a disaster from top to bottom.”
PRESIDENTIAL ELECTION・4 HOURS AGO
Business Insider

"It's clear to me that we're going to have to probably break it up," he said. It's unclear when Democrats will coalesce on a smaller bill.
BUSINESS・24 MINUTES AGO

WASHINGTON, Jan 19 (Reuters) - U.S. President Joe Biden on Wednesday said it was too soon to make commitments on lifting U.S. tariffs on Chinese goods, but his chief trade negotiator Katherine Tai was working on the issue. "I'd like to be able to be in a position where I...
POTUS・14 MINUTES AGO
WashingtonExaminer

Is Biden getting new neighbors? Legislation proposed to send illegal immigrants to Delaware

President Joe Biden could be getting some new neighbors, if one state senator gets his way.
DELAWARE STATE・4 HOURS AGO
WashingtonExaminer

A blitz of newsy and folksy ads from businessman Bernie Moreno, who is running in the Ohio GOP primary to replace retiring Sen. Rob Portman, worked to vault him from last to third, according to internal polling released on Wednesday.
OHIO STATE・1 HOUR AGO
WashingtonExaminer

Senate Minority Leader Mitch McConnell pledged to uphold the filibuster if the GOP takes control of the filibuster and called Democrats “radicals” for trying to vote to end the 60-vote threshold later Wednesday.
CONGRESS & COURTS・50 MINUTES AGO