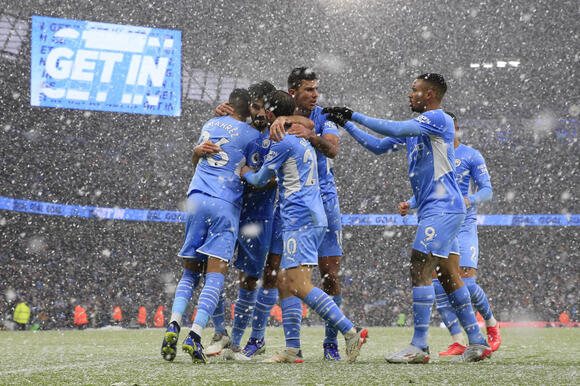 The snow was hammering down at the Etihad Stadium, with the conditions maybe the biggest indicator that the tough winter schedule is upon us.

Manchester City ended a relentless seven days by easily dispatching West Ham United in the Premier League. A 2-1 scoreline probably does not tell the full story of a controlled performance by the Blues.

Ilkay Gundogan opened the scoring for City. After Riyad Mahrez was picked out by a delightful Joao Cancelo ball, the Algerian cut onto his left foot and picked out his teammate to tap home.

Some chances were wasted during the second half, but in the end, club captain Fernandinho came off the bench to seal the victory with a cultured finish.

West Ham's Manuel Lanzini had time to find a consolation for the visitors, but the whistle was blown shortly after.

Speaking to ManCity.com after the game, midfield general Rodri provided an assessment on his team's performance, particularly in such tough conditions.

"Today was a battle - it was difficult due to the weather, but always difficult against this team, one of the toughest in the Premier League," the Spaniard admitted.

"They can punish on the counter. They are players you have to control more. It wasn’t good due to the weather, it was tough."

Maybe not the weather Rodri is used to in Spain. But that didn't affect the 25-year-old, who produced yet another imperious performance in central midfield.

Attentions now turn to midweek for Manchester City, with a trip to a hostile Villa Park in store for Pep Guardiola.

The Algeria superstar was disappointingly knocked out of the Africa Cup of Nations in the group stage on Thursday night, courtesy of a 3-1 defeat against Ivory Coast on matchday three. The defending Africa Cup of Nations champions failed to win a game across three fixtures, and Mahrez - who...
PREMIER LEAGUE・12 HOURS AGO
The Independent

Saturday, 3pm matches don’t always feature teams in the spotlight, those creating the biggest stories, so it’s a change of pace this weekend. Newcastle - and all the money and mayhem that comes with them right now - are in action at the same time as Manchester United host West Ham, both those sides fighting it out for a Champions League or Europa League spot.And so are Wolverhampton Wanderers.Bruno Lage’s side haven’t yet taken too much focus in the wider Premier League picture, but perhaps they are about to. They have won only one fewer than Man United, lost only...
PREMIER LEAGUE・3 HOURS AGO
CityXtra

Manchester City will be looking to cap off what has so far been a perfect month with a win over Southampton at the weekend, as Pep Guardiola's side aim for a 13th consecutive league triumph to extend their advantage further at the top of the Premier League. Kevin De Bruyne's...
PREMIER LEAGUE・1 DAY AGO

Kevin De Bruyne has been one of many midfielders who have been tasked with filling the gap in the number nine slot at the Etihad Stadium over the past year-and-a-half, alongside the likes of Bernardo Silva, Phil Foden, Ilkay Gundogan and Jack Grealish. The 30-year-old, who was named in the...
PREMIER LEAGUE・1 DAY AGO
CityXtra

Alongside the roaring success of the Manchester City first team in recent years, the club's academy system is thriving just as well. The results differ, with some player sales resulting in healthy paydays for the club, like Jadon Sancho, or some finding their way into the City first-team, like Phil Foden and Cole Palmer.
PREMIER LEAGUE・2 DAYS AGO

As several of the world's leading companies, football brands, and clubs announce their respective awards and rankings for the year of 2021, the number one football video game has now released their world XI from the last 12 months. After a round of voting from millions of players of FIFA...
PREMIER LEAGUE・18 HOURS AGO
CityXtra

The Ukrainian international is one of the biggest fan favourites at Manchester City, often hailed for his impressive versatility and steely determination since his arrival from FC Ufa in 2016. Oleksandr Zinchenko joined the club as a central midfielder, but was converted into the left-back role under Pep Guardiola’s tutelage,...
PREMIER LEAGUE・1 DAY AGO
CityXtra

This season, Phil Foden's performances have continued to hit the staggering heights that saw him emerge from the Manchester City academy at just 17 years of age. The Stockport-born midfielder is one of the first names on Pep Guardiola's teamsheet at the moment, with his technical quality pinpointed as the reason he continues to be deployed in the false nine role.
PREMIER LEAGUE・1 DAY AGO
CityXtra

Riyad Mahrez's desire to avoid a premature return to Manchester could not be fulfilled as Algeria suffered their third group-stage loss to surrender their Africa Cup of Nations crown after a disappointing tournament for Djamel Belmadi's side. While Manchester City have not overly missed the former Leicester man in their...
PREMIER LEAGUE・15 HOURS AGO

The City Football Group-owned clubs have proved to be a temporary home for several developing prospects at Manchester City, such as the likes of Pablo Maffeo, Marlos Moreno and Yan Couto in the recent past. With the umbrella company holding stakes in nine different clubs in different leagues around the...
PREMIER LEAGUE・23 HOURS AGO
CityXtra

Zinchenko has often been speculated with various moves away from Manchester City, but his six-year association with the club has continued to this day, largely down to the former FC Ufa prospect's relentless drive to improve. While his game may not be as glamorous as some of the flair players...
PREMIER LEAGUE・2 DAYS AGO
Yardbarker

As Manchester City have the benefit of full midweek breaks in between matches at present, many of Pep Guardiola's squad are making the most of their time off when away from the City Football Academy. Several members of the squad live in Manchester city centre, and are often spotted enjoying...
PREMIER LEAGUE・15 HOURS AGO
90min.com

Manchester United will host West Ham in their upcoming Premier League game. The two clubs last met in September 2021, wherein they faced each other in back to back games. United had the better over the Hammers in the league where they won 2-1. On the other hand, West Ham knocked the Red Devils out of the Carabao cup by winning the tie1-0.
PREMIER LEAGUE・46 MINUTES AGO
CityXtra

The current league leaders will be looking to further strengthen their grip on retaining the Premier League crown this weekend, as they travel south to take on a threatening Southampton side at St Mary's. The match represents another opportunity for Pep Guardiola's squad to further extend their lead over title...
PREMIER LEAGUE・1 DAY AGO
CityXtra

A comprehensive round-up of all the latest Manchester City transfer news and gossip from across the globe, after the nineteenth day of the winter transfer market. Manchester City academy star James McAtee is still wanted by Swansea City on loan in January. (Ian Mitchelmore, Wales Online) Real Betis are on...
PREMIER LEAGUE・12 HOURS AGO
CityXtra

After several months of struggles in comparison to the blistering form that fans have become accustomed to, Raheem Sterling appears to have returned to his electric best for Manchester City. The England international’s terrific displays in December were duly recognised, with Manchester City’s number seven winning the Premier League Player...
PREMIER LEAGUE・23 HOURS AGO
CityXtra

Couto, who arrived from Brazilian side Coritiba FC as an addition to the U-23 ranks at Manchester City, signed a season-long loan deal with Braga at the start of the campaign. The 19-year-old full-back has made 24 appearances across all competitions for the Primeira Liga outfit since August, with four assists to his name after spending the previous season on loan at Girona, where he netted twice and set up five goals in 30 outings for the Spanish club.
PREMIER LEAGUE・23 HOURS AGO