No confirmed cases of omicron variant in NYC, but new mask advisory issued 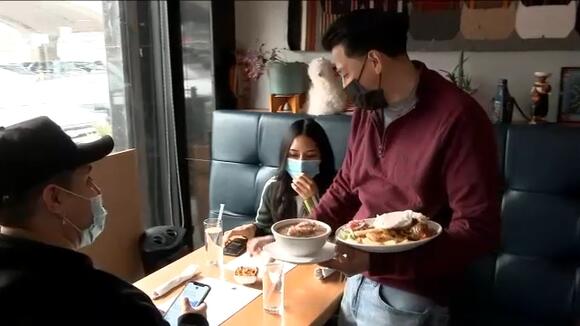 New York City health officials issued a new mask advisory on Monday, strongly recommending all residents -- regardless of vaccination status -- wear masks in all public indoor settings ahead of expected cases of the new omicron variant of COVID-19. "Today, I am also issuing a Commissioners' advisory strongly recommending that all New Yorkers wear a mask at all times, when indoors and in a public setting, like at the grocery, in building lobbies, offices and retail stores," Health Commissioner Dr. David Chokshi said. "This includes those who are vaccinated and those who have had COVID-19. Higher quality masks can offer additional protection, and masks are still required for everyone in public transit, health care settings, schools and congregate settings." Mayor Bill de Blasio, Mayor-elect Eric Adams, and New York Governor Kathy Hochul addressed concerns over the new variant, first discovered in southern Africa. City officials say scientists have yet to confirm any cases of omicron in New York City, but they anticipate cases of the newest variant to begin popping up. "We do anticipate detecting omicron in New York City in the coming days based on what we know about its global spread," Dr. Chokshi said. MORE NEWS | State of Emergency issued in NY to help boost hospital capacity

There are fears that the new variant could be even more contagious than the current predominant one.

Mayor Bill de Blasio added that health officials are "very, very carefully" monitoring the omicron variant, adding that it will be critical for vaccination efforts. "What we are saying clear as a bell today is what has worked up to now continues to be the key," he said. "Vaccination and obviously masks play a very important role as well." There is a "high level of coordination underway," de Blasio said, adding that he and Governor Hochul have been coordinating city and state efforts. Officials also said they are encouraging all individuals who traveled or gathered for the Thanksgiving holiday to get tested. On average, federal data shows that nearly 5,400 people in New York are testing positive for the virus each day, marking the highest number of new positive cases reported daily since the first week of February. So far, 88% of adults in NYC have had at least one dose. Among kids ages 12-17, the number is 81%. However, just 16% of kids ages 5-11 have had at least one dose of the vaccine. Some 930,000 people in the city have gotten their booster shot. Meantime Monday, the U.S. banned most travel from eight countries , including South Africa. Permanent residents and U.S. citizens are not affected. The aggressive step comes after World Health Organization researchers in Botswana discovered the new variant. The concern is that this strain may have mutated so much that it could be resistant to antibodies and vaccines may not be as effective. United Airlines Flight 187 arrived at Newark Airport just before 7 a.m. Monday, the last flight from Johannesburg, South Africa, with international passengers ahead of the administration's travel ban.

"I've been tested and I had my negative test, and I also have my vaccination certificate with me," said Hennie Viljoen, traveling from South Africa. "I think that should be enough. I don't think they should carry on. We can't carry on by just locking up everybody. I don't think that's good for the economy." Still, flights from South Africa will continue. United is one of two U.S. carriers that fly out of southern Africa, Delta is the other. Neither have any plans to change their schedules in response to the ban, which does not apply to American citizens or lawful permanent residents. As United explained in a statement, "United remains committed to maintaining a safe and vital link for repatriation efforts as well as the transport of essential supplies like vaccines between Africa and the U.S." MORE NEWS: Fauci says omicron variant will 'inevitably' arrive in US

While the new omicron variant of the COVID-19 virus has not yet been detected in the United States, it will "inevitably" arrive, Dr. Anthony Fauci said Sunday.

Not only does United operate five flights a week between Newark and Johannesburg, but the airline also plans to resume flights between Newark and Cape Town on Wednesday. Delta operates three weekly flights between Atlanta and Johannesburg. Under current regulations, all passengers flying into the United States must provide proof of a negative coronavirus test, and noncitizens are required to be fully vaccinated. Doctors in our area say vaccines and booster shots are still the best defense against the new variant. "The vaccines, even if they take a hit, will not be rendered ineffective," said Dr. Jen Ashton, Chief Health and Medical Editor and Correspondent for ABC News. "So I'm very confident that the vaccines will provide some degree of protection, maybe a very high degree of protection, that's why it's really important that people get the vaccines and people get boosted if they're eligible." WATCH | Dr. Sutton explains what we know about omicron:

ABC News medical contributor Dr. Darien Sutton has more on what we know so far about the omicron variant.

Why did the CDC skip over 2 letters of the Greek alphabet in the naming of this variant? Do they really think that labeling it : Nu; that they'd confuse the masses? If they monikered it: Xi; would they insult their boss?* As of late; there has been no reports of hospitalizations nor deaths regarding this new strain(variant).* subject to change

still not going to wear a mask, not taking the frankin shot, and I don't believe the mainstream media or these democrats with their agenda they trying to push🖕

Not wearing one nope. There will keep being more and more variants so there is no point. They going to keep strongly recommending masks when another variant comes along? Ain't gonna happen for me. Not living my life in fear.

Children between the ages of 5 and 11 now need proof of full vaccination, meaning both doses of either the Pfizer or Modena vaccines, for indoor activities in New York City.
NEW YORK CITY, NY・15 HOURS AGO
ABCNY

The LIRR is preparing to suspend service Saturday as the winter nor'easter bearing down on the Tri-State area threatens to make for messy travel.
NEW YORK CITY, NY・12 HOURS AGO
ABCNY

Submit your COVID questions for medical experts and we will get them answered on Eyewitness News.
NEW YORK CITY, NY・12 HOURS AGO

The storm is expected to hit Friday evening and last through Saturday night for Long Island, New York City, and the Mid-Hudson regions.
NEW YORK CITY, NY・6 HOURS AGO
ABCNY

Operation 7: Save a Life- watch it only on ABC7NY

Meet the essential workers of the 2022 NYC sanitation department calendar

Parts of Connecticut could get 2 feet of snow, Gov. Lamont warns

Residents and officials across Connecticut are bracing for a powerful winter storm expected to produce blizzard conditions Friday and Saturday.
CONNECTICUT STATE・8 HOURS AGO

The murder of two NYPD officers is sparking renewed calls for overturning bail reforms enacted two years ago and cracking down on guns.
NEW YORK CITY, NY・1 DAY AGO
ABCNY

Mayor Eric Adams is discussing his plans to crack down on violent crime, making the subways safe and getting people back to work in the nation's largest city.
NEW YORK CITY, NY・1 DAY AGO
ABCNY

A letter written more than 75 years ago at the end of the Holocaust has resurfaced at a New York flea market and been returned to a family descendant.
NEW YORK CITY, NY・1 DAY AGO
ABCNY

'This is a big one': Murphy declares state of emergency ahead of NJ nor'easter

Gov. Phil Murphy declared a state of emergency in New Jersey, effective at 5 p.m., ahead of the nor'easter.
ENVIRONMENT・6 HOURS AGO

Cases nationwide have dropped by 10% in the last week. The Tri-State area along with New England and the Upper Midwest have already seen cases hit their peak.
NEW YORK CITY, NY・4 DAYS AGO
ABCNY

Face masks were back in schools across Nassau County Wednesday after day of confusion following a state Supreme Court ruling and a quickly filed appeal.
NASSAU COUNTY, NY・2 DAYS AGO
ABCNY