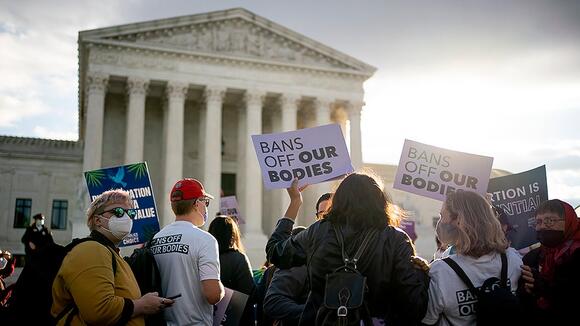 The justices will hear arguments Wednesday over a Mississippi law that bans abortion after 15 weeks in a direct challenge to Roe v. Wade.

The case poses the clearest test yet of the 6-3 conservative court’s trajectory.

Conservatives and anti-abortion activists have since 1973 sought to narrow or overturn the legal right to an abortion first recognized in the Roe decision. They hope the upcoming Mississippi case finally leads to its dismantling.

The state's Republican attorney general, in a court brief filed over the summer, explicitly urged the justices to overrule Roe and related rulings, calling the court’s precedent on abortion “egregiously wrong.”

“This Court should overrule Roe and Casey,” Mississippi Attorney General Lynn Fitch (R) wrote, referring also to the court’s 1992 decision in Planned Parenthood v. Casey. “Roe and Casey are egregiously wrong. They have proven hopelessly unworkable. ... And nothing but a full break from those cases can stem the harms they have caused.”

Under Roe and Casey, states may regulate abortion up to the point of fetal viability, typically around 23 weeks, so long as the restriction does not pose an "undue burden" on abortion access. Mississippi’s law, which bans abortion after 15 weeks of pregnancy and makes exceptions only for medical emergencies or “severe fetal abnormality,” is a clear-cut violation of this framework, critics say.

Compared to the recent past, however, abortion opponents now face a far more sympathetic Supreme Court bench. In a 2020 abortion decision, for example, a 5-4 court that ruled against a Louisiana abortion restriction included a vote by the late liberal stalwart Justice Ruth Bader Ginsburg , who joined the court's three other liberals and Chief Justice John Roberts to form a bare majority.

In a court term packed with politically explosive topics, from gun rights to issues of church-state separation, the dispute over Mississippi’s ban could provide the clearest indication yet of just how far the heavily conservative Supreme Court is willing to go to fundamentally reshape major aspects of American life.

Robert Tsai, a constitutional law professor at Boston University, emphasized that the court’s more conservative justices “have been raised on a steady diet of teachings that Roe has always been illegitimate.”

“For most of them,” he said, “it has been just a matter of when, not if, to vote against abortion rights.”

Wednesday’s arguments come as the country awaits the court’s ruling on another controversial abortion restriction: Texas’s S.B. 8, which bans abortion at the first sign of fetal cardiac activity, typically around six weeks.

In September, a 5-4 court allowed the Texas law to take effect; the justices in early November heard expedited oral arguments over a challenge to the law, and a ruling could come at any time.

Over the roughly three-month span that Texas’s law has been in effect, the country has been given a glimpse of what a post-Roe world might look like. S.B. 8, the most restrictive abortion law in the country, has largely shut down abortion in Texas and forced many women to travel outside the state for treatment.

Many Republican officials would prefer this approach, which allows states to determine the rules around abortion. In the Mississippi case, a dozen GOP governors asked the justices in a court filing to eliminate federal abortion protections in order to allow states to regulate the procedure.

This is no idle request, either. The 2018 Mississippi law — which has been paused during litigation — is just one of hundreds of abortion measures that state legislatures passed in recent years, many with the explicit goal of overturning Roe.

The Center for Reproductive Rights, an abortions rights group and co-counsel in the Mississippi case, analyzed abortion laws in all 50 states, the District of Columbia and several U.S. territories for a 2019 study called “What If Roe Fell?” The group inventoried what measures would be left in place if Roe were weakened or overturned and rated jurisdictions along a continuum from “expanded access” to “hostile.”

Abortion rights advocates say this scenario would be a recipe for “chaos.” In their court brief opposing Mississippi's law, abortion providers urged the Supreme Court against formally undermining the constitutional right to abortion.

“The fallout would be swift and certain,” abortion providers argued in their court brief. “As abortion bans are enforced — or the threat of enforcement looms — large swaths of the South and Midwest would likely be without access to legal abortion.”

Mississippi’s appeal comes after losing two rounds in the lower courts. In 2019, the U.S. Court of Appeals for the 5th Circuit held that the state’s restriction was an unconstitutional ban on a woman’s right to terminate an unwanted pregnancy before viability.

The appeals court found that Mississippi’s restriction violated “an unbroken line dating to Roe v. Wade” in which the Supreme Court has consistently reaffirmed “a woman’s right to choose an abortion before viability.”

'It's up to states to do the right thing': Biden tells states to ignore Supremes and impose vax mandates anyway after SCOTUS votes 6-3 to BLOCK his federal order

President Biden urged businesses to bring in vaccine mandates on their own and pushed states to 'do the right thing' after the Supreme Court voted 6-3 to block his sweeping rules on private companies in a crushing blow to his pandemic response. The high court did however allow a vaccine...
PRESIDENTIAL ELECTION・3 DAYS AGO
Arizona Mirror

One law professor says Texas hopes to delay a decision until the U.S. Supreme Court decides on another abortion case that could overturn Roe v. Wade. Texas is asking the U.S. Fifth Circuit Court of Appeals to allow Texas' Supreme Court to take up a challenge to whether licensing officials, including those in the state Health and Human Services department, Texas Medical Board and Texas Board of Nursing, have the power to enforce the state's new abortion law, known as Senate Bill 8. SB 8 outlaws the procedure after about six weeks of pregnancy, and is one of the most restrictive in the country.
TEXAS STATE・6 DAYS AGO

Abortion and the Supreme Court: How the religious right uses abortion to dictate morality

Abortion positivity is more essential now than ever as the fight over abortion access in the U.S. reaches an inflection point. On Dec. 1, the U.S. Supreme Court heard arguments in the 2018 Dobbs v. Jackson Women’s Health Organization case out of Mississippi, a case that will determine the future of legal abortion access in our country.
OHIO STATE・10 DAYS AGO
Gazette

NEW ORLEANS (Reuters -Louisiana's governor on Wednesday posthumously pardoned Homer Plessy, the plaintiff in the landmark 1896 U.S. Supreme Court case that upheld the "separate but equal" doctrine and laid the legal foundation for decades of racial segregation. Governor John Bel Edwards, who signed the pardon at a ceremony in...
EDUCATION・11 DAYS AGO
dallassun.com

Justices have heard oral arguments on a case in Mississippi which would ban abortions after 15 weeks. They also sent a Texas case, which effectively bans abortions after six weeks, back to a federal appellate court. Despite a Supreme Court which seems more favorable to abortion opponents, no decision has...
CONGRESS & COURTS・12 DAYS AGO
CBS DFW

WASHINGTON, D.C. (CBSDFW.COM/CNN) – Abortion providers are asking the Supreme Court to require a conservative federal appeals court to return their challenge to Texas’ six-week abortion ban to a district court judge who previously ruled in their favor. The long-shot bid on the part of the providers is...
TEXAS STATE・12 DAYS AGO

The MSNBC host accused the conservative judges of caring more about right-wing politics than "saving lives" after voting to block the mandate.
CONGRESS & COURTS・2 DAYS AGO
Vox

The Supreme Court takes up a case, brought by Ted Cruz, that could legalize bribery

The details of Federal Election Commission v. Ted Cruz for Senate, a case that the Supreme Court will hear next Wednesday, read more like a paranoid fantasy dreamed up by leftists than like an actual lawsuit. The case concerns federal campaign finance laws, and, specifically, candidates’ ability to loan money...
CONGRESS & COURTS・4 DAYS AGO
q13fox.com

WASHINGTON, D.C. - The Supreme Court said Friday it will hear the case of a former Bremerton, Washington football coach who was removed from his job because he refused to stop praying on the field. Former Bremerton High School coach Joe Kennedy’s lawyers say the religious beliefs of their client,...
BREMERTON, WA・2 DAYS AGO
6abc Action News

The federal government has some power to impose vaccine mandates, but the devil is in the details and it can't do so in an arbitrary or unreasoned manner.
CONGRESS & COURTS・6 DAYS AGO
NBC Dallas-Fort Worth

The Texas Supreme Court heard arguments Tuesday in a key case involving the plan to build a bullet train between Dallas and Houston. The case pits landowner James Fredrick Miles against Texas Central, the developer of the proposed high-speed rail project. The question was whether "Texas Central" is a railroad,...
TEXAS STATE・4 DAYS AGO
MarketWatch

Who gave a 50-year-old federal agency the power to create a vaccine mandate? Behind the Supreme Court’s decision to block Biden’s employee mandate

'OSHA has never before imposed such a mandate,' the conservative members of the Supreme Court wrote in their decision, released Thursday.
WASHINGTON, DC・3 DAYS AGO
NPR

Another supreme battle at the U.S. Supreme Court Friday: In a special session, the justices are hearing expedited arguments in cases challenging two major Biden administration regulations aimed at increasing the number of vaccinated workers. The cases are in a preliminary posture, but how the court rules will very likely...
CONGRESS & COURTS・9 DAYS AGO

Reaction is still coming in following the mixed decision from the U.S. Supreme Court to stop the Biden administration from enforcing a COVID vaccine-or-testing requirement at large companies.
TENNESSEE STATE・2 DAYS AGO
Newsweek

It's back to the drawing board for Ohio's redistricting commission after the state Supreme Court said its proposed legislative map was too partisan.
OHIO STATE・4 DAYS AGO
WLKY.com

LAFAYETTE, Ind. — A former couple will not face charges after they were accused by Indiana officials of abandoning their adopted child. The Indiana Supreme Court announced it will not hear the state's appeal on criminal charges against the now-divorced couple. In 2020, a judge dismissed neglect charges against...
INDIANA STATE・6 DAYS AGO
Shore News Network

When it comes to truth and justice, Americans would think the pinnacle of these values would be the U.S. Supreme Court, but today, Supreme Court Justice Sonia Sotomayor falsely alleged that over 100,000 children are sick in the hospital, on life-sustaining ventilators across America. “We have hospitals that are almost...
CONGRESS & COURTS・9 DAYS AGO