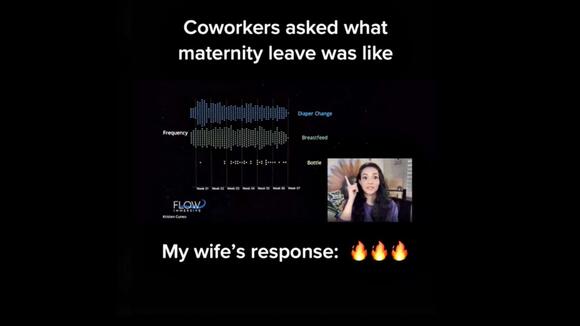 For any mom who's ever been asked if they "enjoyed their vacation" during maternity leave , Kristen Cuneo has the perfect reply.

Cuneo, who works for a technology company in the San Francisco Bay area, created a data visualization showing as data points every bottle feed, breastfeed and diaper change she completed in the first seven weeks after giving birth to her daughter, Autumn, in January.

Just a few seconds into the visualization, the data points take up an entire screen.

"Objectively, it's a lot, and every data point took time, ranging from five minutes for a diaper change to 30 minutes for a feeding, on average," said Cuneo, presenting the data to coworkers. "The real kicker is when it happens, 24 hours a day."

Cuneo's presentation was shared on TikTok by her husband, Michael DiBenigno, co-founder of Flow Immersive , a California-based company that focuses on data storytelling.

Let’s be real @lifeof.kristenc is definitely the main character in this house.

It quickly went viral, with hundreds of thousands of likes and over 2,000 comments.

"And that does not include laundry, bathing, well baby checkups, getting baby to sleep, fussy baby or the fact that baby needs to be held constantly," wrote one commenter.

"All while recovering from a major medical procedure! Moms of newborns are absolutely amazing," wrote another commenter.

MORE: Advocates rally for paid leave as they brace for possible cuts in final spending package

Another commenter alluded to the fact that there is currently no federal paid leave in the United States, writing, "This woman needs to be in front of Congress."

I’ve been asking @lifeof.kristenc to present this way for years and it finally happened! Please show her some ❤️ for getting out of her comfort zone!

Only 27% of private industry workers currently have access to paid family leave, according to the Bureau of Labor Statistics .

Cuneo told "Good Morning America" she considers herself lucky to have been able to take maternity leave.

She said she also feels grateful that her presentation has helped so many parents, especially moms, "feel so seen and heard."

"It is a shared experience, even though it is hard," Cuneo said of being a new parent. "The response that we've gotten has been completely mind-boggling, that so many people can have this experience, and yet something like this could resonate so powerfully for them whether or not they're currently raising a child or maybe they did 20 years ago."

Cuneo and DiBenigno created the presentation by using data compiled in a baby habit-tracking app they started using when Autumn was a newborn.

"We had heard over and over that being a new parent, you never sleep, but it's hard to understand what that really felt like," said DiBenigno. "It wasn't until we saw the data points and put together this visualization that we were like, 'Wow, you see that continual, never-ending cycle of the mundane, routine labor of all these things that are just necessary.'"

welcome to mother hood MOM. and guess what when there that young itz easy.as they get older it's ALOT HARDER. so hold your hat going for the ride of YOUR LIFE

Working mom’s ‘Out of Office’ message goes viral on LinkedIn

Now more than ever, parents deserve grace—from themselves, from their communities, and from their workplaces. Because pandemic parenting is taking parental burnout to a whole new level. So it's no wonder that one working mom's spin on the classic "Out of Office" message is going viral on LinkedIn. Mary...
FAMILY RELATIONSHIPS・14 DAYS AGO
Connecticut Mirror

When kids under 5 get COVID-19, parents are screwed

As more young children test positive for COVID-19, more parents are caring for their COVID-positive children while battling infection themselves.
KIDS・2 DAYS AGO
GMA

Moms join together to scream amid pandemic struggles

Mothers in Massachusetts let out their frustrations of the past two years of the coronavirus pandemic.
BOSTON, MA・9 HOURS AGO
Newsweek

"You did the right thing. You're a wonderful parent. At the end of the day, most men will come and go in her life, but you'll always be there," said a commenter.
FAMILY RELATIONSHIPS・1 DAY AGO

America is currently one of the few developed countries that doesn’t offer a single week of paid federal leave for new parents. While the Family and Medical Leave Act (FMLA), does provide up to 12 weeks of parental leave, it’s unpaid and doesn’t take account the financial burden new parents so often face. With the introduction of the Build Back Better Act, more and more people are speaking out about the long overdue need for paid leave and financial support for new parents. Now, one new mom is adding her voice to the conversation.
BEHIND VIRAL VIDEOS・1 DAY AGO
Newsweek

"This country does nothing for children," said one commenter. "They prioritize work and that's it."
FAMILY RELATIONSHIPS・3 DAYS AGO
Newsweek

'No, Ask Your Brother': Internet Slams Mom for Not Letting Grown Daughter Drive After Dark

"Your daughter is an adult, why are you treating her like a 16 year old?" one user commented.
FAMILY RELATIONSHIPS・17 HOURS AGO
KESQ News Channel 3

This morning, we want to take a moment to send our best wishes to Angela Chen. She's heading out on maternity leave starting on Thursday. Angela will be missed by her News Channel 3 family, but we look forward to her return in a few months. She and her husband are excited to welcome their The post Morning anchor Angela Chen departs for maternity leave appeared first on KESQ.
CELEBRITIES・6 DAYS AGO

The disgruntled party says they were told: "Leo has special circumstances because he's a widower and it's essentially my fault for not providing babysitting options for guests."
RELATIONSHIP ADVICE・6 HOURS AGO
hermoney.com

How to Prepare for Maternity Leave

I'm about to take maternity leave – here's how I'm preparing to leave work. As I was setting up my home office a few months ago, I stumbled upon a ‘Dream Journal’ I started at age fifteen. Inside was a list of my aspirations, including things like ‘traveling the world’ and ‘going to college.’ But of all of my goals, the two that have meant the most to me over the years have been building my writing career, and growing my family. I’ve spent the better part of my adult life doing the former, and at 33, with a successful business and portfolio, I’m now moving to the second part of my life: becoming a mom. My husband and I are thrilled (and, yes, a tad overwhelmed) to welcome our daughter in March.
WOMEN'S HEALTH・21 MINUTES AGO
Insider

After a TikTok showing my night doula went viral, I was shamed for not taking care of my newborn. But there’s no badge of honor for struggling as a mom.

A new mom was shamed for having a night doula to help take care of her son. She wants parents to know that getting help is OK.
BEHIND VIRAL VIDEOS・3 HOURS AGO
MarketWatch

Rebecca Shumard returned to work 12 days after giving birth, while her premature baby was still in the NICU, because she didn't have enough paid leave time
FAMILY RELATIONSHIPS・1 DAY AGO
The US Sun

A PREGNANT stay-at-home mum has shared a look at her messy house, in a bid to normalise the chaos that comes with having children. The mum-of-three took to TikTok to post a video snapshot into her life at home, complete with mess, toys and laundry everywhere. "I just want to...
RELATIONSHIP ADVICE・5 DAYS AGO
Daily Mail

A YouTube star who was placed in a coma for two months while battling Covid has revealed how she dreamed her body was 'floating down a river' while comatose and that she loves 'mundane moments' now that she is well. Grace Victory, 31, from High Wycombe, who has built a...
TV & VIDEOS・1 DAY AGO
whattoexpect.com

Best Maternity Shorts, According to Moms-to-Be

What to Expect selects products based on independent research and suggestions from our community of millions of parents; learn more about our review process. We may earn commissions from shopping links. The ease and versatility of shorts make them a wardrobe staple. You can dress them up, wear them to...
BEAUTY & FASHION・12 DAYS AGO
HOLAUSA

King Felipe of Spain’s sister Infanta Cristina and her husband Iñaki Urdangarin are separating after 24 years of marriage. The pair announced the news in a statement saying (via ¡HOLA! Spain and translated to English), “By mutual agreement, we have decided to interrupt our marriage relationship. The commitment to our children remains intact.”
RELATIONSHIP ADVICE・1 DAY AGO
12tomatoes.com

“Mom brain” is a very real phenomenon that is keeping many mothers from being able to live down their silly mistakes. As parents ourselves, we can understand where they are coming from, though. Emily Vondrachek is a mother of four and once you see the mistake that she made? You will definitely be able to start forgiving yourself for all of the errors that you are making.
BEHIND VIRAL VIDEOS・1 DAY AGO
morningbrew.com

On Wednesdays, we make time for our weekly 1:1 with HR Brew’s readers. Want to be featured in an upcoming edition? Click here to introduce yourself. Amber Warren has been an HR professional for nearly 15 years, most recently at Lap of Love Veterinary Hospice, a nationwide veterinary practice dedicated exclusively to in-home, end-of-life care for pets. As director of human resources, Warren is responsible for managing a staff of 500 employees, almost all of them working remotely in more than 30 states across the US.
PETS・13 DAYS AGO
Newsweek

The man's coworker said that he was "profiting off other people's generosity in the celebration of Christ's birth."
SOCIETY・14 DAYS AGO
Lawrence Post

The 27-year-old mom of six reportedly died after battling COVID-19 and pneumonia related to the virus. Her husband said that he and his wife were not vaccinated due to their beliefs. The mother was pregnant with their sixth child when the couple caught COVID-19. The woman from Texas, Crystal Hernandez,...
PUBLIC HEALTH・3 DAYS AGO