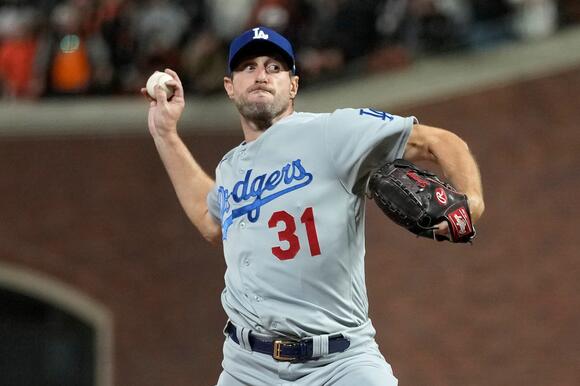 The Mets are prioritizing starting pitching after a Black Friday shopping spree netted Starling Marte, Eduardo Escobar, and Mark Canha, and it appears as if they may be close with one of the biggest fish in the starting sea: Max Scherzer.

According to Joel Sherman of the New York Post, the Mets are “making progress” with Scherzer as of late Sunday night, and a deal might be for “as much as four years if it gets done.”

SNY’s Andy Martino reported earlier Sunday that the Mets had offered Scherzer “more than $40 million per year,” and just before midnight, Martino tweeted that according to two sources, the offer was "for about 42 million per year over either three or four years."

Both Kevin Gausman and Jon Gray, two other reported Mets targets, look to be off the board – Gausman to Toronto for five years and $110 million, Gray to Texas for four years and $56 million - and with the Mets unlikely to be in on Robbie Ray due to the draft pick compensation attached to him, Sherman Tweeted that the Mets are “pushing hard” for Scherzer and “went from no shot to in the game,” with a “strong expectation” Scherzer signs “no later than (Monday).”

Scherzer’s agent, Scott Boras, also represents Carlos Rodon and Yusei Kikuchi, so there could be some traction on those hurlers as well if the Mets make a good impression on Scherzer’s negotiations.

The market has already moved swiftly, with more than one-third of MLB Trade Rumors’ Top 50 free agents already signed or in agreement, and several other second-tier players, including ex-Met Aaron Loup, also already off the board.

That flurry may be in part because, as Mark Feinsand of MLB.com notes, the expectation remains for a work stoppage when the CBA expires at 11:59 p.m. on Dec. 1, meaning teams only have until Tuesday night to get deals agreed to and physicals performed before the market goes on hiatus.

Three weeks from when pitchers and catchers usually report and no one knows when spring training will start or if it will be a truncated schedule.
MLB・2 DAYS AGO
Audacy

BOSTON (CBS) — It wouldn’t be Hall of Fame season if a member of the baseball media wasn’t twisting himself into a pretzel for all the world to see. Enter Jack Curry of the Yankees’ broadcast network. Curry revealed his ballot on Tuesday, which is the day that the Baseball Hall of Fame will announce which players — if any — will earn enshrinement this year. Curry used eight of his allowable 10 votes this year, and for the first time in their 10 years of eligibility, Barry Bonds and Roger Clemens received his vote. The reason Curry hadn’t voted for Bonds and...
MLB・1 HOUR AGO
Inside The Dodgers

Ahead of the January 25th Baseball Hall of Fame announcement, we look at five former Blue Jays on the ballot and their chances at induction
MLB・2 DAYS AGO
Inside The Phillies

The two sides are starting to step up the pace of their meetings.
MLB・23 HOURS AGO
Inside The Phillies

Jean Segura doesn't put up flashy numbers or make dazzling defensive plays, but all together he is one of the most well-rounded players in the National League.
MLB・2 DAYS AGO
Inside The Phillies

Five years after signing on as Phillies general manager, Matt Klentak has accepted a job as special assistant for the Milwaukee Brewers.
MLB・1 DAY AGO

The MLB and MLBPA are set to meet on Monday to continue CBA negotiations.
MLB・2 DAYS AGO
Inside The Phillies

Alec Bohm was one of the league's worst fielders in 2021. As trade rumors swirl this offseason, it would mean a lot for the Phillies if Bohm could put a hammerlock on his natural position.
MLB・2 DAYS AGO
News 12

If there is a Major League season, the Mets are expected to be serious contenders.
MLB・16 HOURS AGO
670 The Score

Bill James served as the Boston Red Sox’ senior advisor for 17 years. Recently, he made some cryptic accusations about the 2011 Red Sox’ broken chemistry.
MLB・1 DAY AGO
Audacy