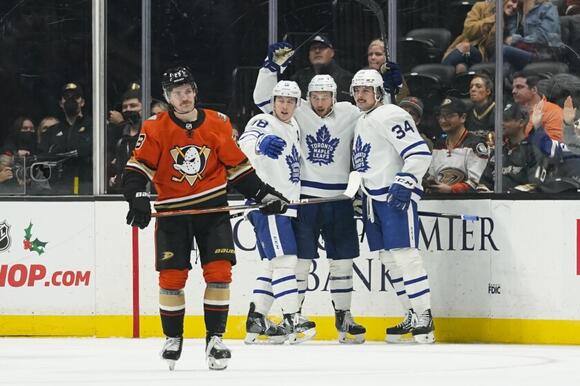 Michael Bunting, Alexander Kerfoot and William Nylander each had a goal and an assist, and the Toronto Maple Leafs completed the most successful month in franchise history by beating the Anaheim Ducks 5-1 on Sunday night.

“The mood in the room is upbeat, everyone’s happy, so it’s really fun to be a part of,” Bunting said. “I think the confidence level is good. Everyone’s contributing now.”

Auston Matthews scored for the third consecutive game, Wayne Simmonds had a goal, and Jack Campbell made 39 saves for the Maple Leafs.

Toronto has not lost away from home since dropping its first three road games. The Maple Leafs swept a four-game trip that started against the New York Islanders and ended by outscoring the three California teams 15-4.

“Lots of energy coming to the rink every day, and we’re playing good hockey, so we just got to keep it up,” Campbell said. “We’ve talked all year about being consistent, and it’s a long, long haul, the 82-game season, so trying not to get too high but also enjoying the good run that we’re on right now.”

Hampus Lindholm scored and John Gibson made 26 saves for the Ducks. Anaheim has lost four of five following an eight-game win streak.

“That’s an elite scoring team,” Ducks coach Dallas Eakins said. “You cannot turn the puck over, you can’t, not even once. Because if you do, it may cost you. It cost us twice, the first two goals came off turnovers. Can’t have a bad change. We had one. Bang, it got us.”

Matthews tipped in T.J. Brodie’s shot at 7:48 of the second to put the Maple Leafs in front, and Bunting made it 2-0 with 8:57 left in the period, burying a one-timer into an open net. Jake Muzzin’s long pass from his own zone to Mitchell Marner sparked a 3-on-1 rush, which ended with Bunting’s sixth goal of the season.

Bunting has two goals and four assists during a four-game point streak.

Kerfoot scored 13 seconds into the third for the three-goal cushion, but Lindholm jammed in a rebound from close range to cut the deficit to 3-1 at 7:26, with Ryan Getzlaf picking up his 19th assist. The Ducks piled on the pressure, but Campbell made the necessary saves to quash their momentum.

Nylander got an empty-netter with 3:07 remaining to make it 4-1, and Simmonds beat Gibson 15 seconds later for the 5-1 final.

“I think we responded pretty well,” Lindholm said. “I think we had some really good solid chances in the third, even after the goal. There’s definitely chances, but if you leave it to only have 10, 15 minutes in the third to win the hockey game against a really good team, you’re not really giving yourself that good of a chance.”

After seeing their exemplary regular season during the abbreviated 2020-21 season erased by a shocking first-round playoff exit to Montreal, Toronto understands that sustained success now means little if it doesn’t create habits to perform in the postseason.

“It’s been a great November. You know, calendar’s gonna turn here. We’re gonna get back home after a long trip and all of that, and have a really good team waiting for us, so we just got to focus on every single day and that’s what we'll do,” coach Sheldon Keefe said of the squad's upcoming game against Colorado.

NOTES: Matthews has three goals and one assist during a three-game point streak. ... F Kyle Clifford started his second stint with Toronto after being acquired in a trade from St. Louis on Nov. 16. Clifford had one goal and two assists in 16 games with the Maple Leafs in 2019-20. … Maple Leafs F Jason Spezza played in his 1,200th career game. … Toronto F Ondrej Kase missed his second straight game because of an upper-body injury.

Brad Marchand and Sidney Crosby are notable snubs for the 2022 NHL All-Star Game, which will be held in February in Las Vegas.
NHL・2 DAYS AGO
Sportsnaut

The NHL season officially started back on October 12. In this article, we track all the NHL games today as
NFL・12 HOURS AGO

College players make up almost two-thirds of the U.S. Olympic hockey roster for Beijing. The 15 college players makes it 11 more than in 2018 when the NHL also opted not to participate.
HOCKEY・2 DAYS AGO
97.1 The Ticket

Individually, Larkin has had a great season. His resurgence has been crucial for the Red Wings, who look to have a No. 1 center moving forward.
NHL・2 DAYS AGO
CBS Boston

BOSTON (CBS) — Tuukka Rask now has 540 starts in net for the Boston Bruins. His most recent one was a lot different than the others, the goaltender admitted Thursday night. Rask said that it was an emotional experience as he made his long-awaited return for the Bruins on Thursday night, his first game in net for Boston in 218 days. The 34-year-old showed very little rust in his first game back from offseason hip surgery, stopping 25 of the 27 shots that the Philadelphia Flyers sent his way and helping Boston notch a 3-2 victory at TD Garden. Simply put, Tuukka...
NHL・2 DAYS AGO
San Diego Union-Tribune

Without NHL participation in the 2022 Winter Games, Team USA is relying heavily on teenagers, collegiate athletes and journeymen alike for its squad.
HOCKEY・2 DAYS AGO
San Diego Union-Tribune

Abbotsford seems to have Gulls' number this AHL season

Aisha Visram is believed to have become the first woman to work on the bench of an NHL regular-season game in any capacity when she served as athletic trainer for the Los Angeles Kings in their 6-2 win over the Pittsburgh Penguins on Thursday night.According to the Professional Hockey Athletic Trainers Society and Society of Professional Hockey Equipment Managers, Visram likely made history when she stepped in because three Kings support staffers were unavailable because of COVID-19 protocols.“That’s incredible. That’s great. We need more of that in our game,” Kings coach Todd McLellan said.Visram is the head trainer for...
NHL・2 DAYS AGO
San Diego Union-Tribune

Josh Norris scored twice, including the tiebreaking goal as the Ottawa Senators tallied five times in the third period to rally past the Edmonton Oilers 6-4
NHL・17 HOURS AGO
San Diego Union-Tribune

The Philadelphia Flyers and New York Islanders are separated by just five points at the bottom of the Metropolitan Division.
NHL・32 MINUTES AGO
Sportsnaut

Depleted Blues hope to bounce back vs. Predators

The St. Louis Blues could move closer to full strength when they host the Nashville Predators on Monday night. The
NHL・32 MINUTES AGO
Sportsnaut

Not much has gone the way of the Montreal Canadiens this season, but they should get a major piece back
NHL・3 HOURS AGO