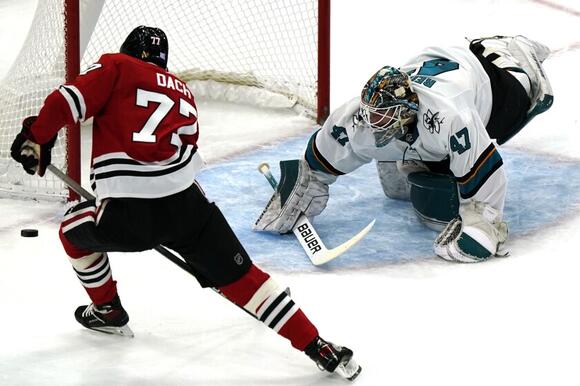 Timo Meier scored on a deflection and added an empty-net goal, James Reimer earned his 42nd career shutout, and the San Jose Sharks beat the Chicago Blackhawks 2-0 on Sunday night.

The Sharks won for the third time in four starts, all with Reimer in goal. He was only occasionally challenged en route to his first shutout in 22 months, stopping 29 shots.

“Sometimes pucks don’t hit you, like against Toronto,” Reimer said, referring to Friday’s 4-1 loss to the Maple Leafs. “Sometimes they do.”

Sharks coach Bob Boughner used video clips of first-period errors, a rare move for him, to try to spark his team. It worked.

“It hurts more when you see it,” said defenseman Mario Ferraro, whose seven blocked shots were welcomed by Reimer.

The loss was the third in five games for Chicago, and dropped the Blackhawks to 6-3-0 since Derek King took over as head coach.

“The second period, we kind of changed the way we wanted to play and it cost us a little bit,” King said. “We spent too much time in our zone. We started forcing plays and they kept the ice tilted until we decided to go back to the way we played in the first.”

Meier was between Chicago goaltender Marc-Andre Fleury and a defenseman when he tipped the shot of Rudolfs Balcers past a screened Fleury 13:39 into the second period, giving San Jose the lead. The goal capped a brief flurry of back-and-forth play in which Chicago defenseman Seth Jones narrowly missed converting on a 2-on-1 break.

“I was just standing in front and it hit me,” Meier said. “I was trying to take the goalie’s eyes away.”

Aside from Jones’ misfire, the closest the Blackhawks came to scoring was on a shot by defenseman Jake McCabe. On the shot, Reimer stretched and gloved it with 27 seconds left in the middle period.

Meier added an empty-net goal with 1:31 to play.

San Jose’s fourth-ranked penalty-killing unit held the Blackhawks to no shots on goal on their two power plays. Shots went high and wide, but not on net, extending Chicago’s power-play drought to one goal on 30 chances in the last 11 games.

“Hopefully we can get it going again and get that confidence like we did in the beginning of the season,” Blackhawks star forward Patrick Kane said of the power play. “It was fun to play like that."

Fleury was nearly perfect, and got help from both McCabe and defenseman Connor Murphy early in the second. Fleury kicked away Alexander Barbanov’s one-timer, after which Murphy swept away Barbanov’s stuff attempt and McCabe cleared it away. Fleury stopped 20 shots.

Suspended San Jose forward Evander Kane was placed on waivers on Sunday. Kane, whose 21-game NHL suspension for submitting a fake vaccination card ended with Sunday’s game, has since been vaccinated. Dan Milstein, Kane’s new agent, said Kane would report to the AHL’s San Jose Barracuda if he clears waivers, while the Sharks try to trade him. … Chicago forward Dylan Strome was a healthy scratch for the second straight game. He’d been in former coach Jeremy Colliton’s doghouse at the start of the season, missing the first four games and six of the first eight. … It was San Jose’s second shutout of the season. Adin Hill picked up the other, at Montreal on Oct. 19.

Sharks: Play the second of their five-game trip Tuesday night at New Jersey.

The NHL season officially started back on October 12. In this article, we track all the NHL games today as
NFL・7 HOURS AGO
Sportsnaut

Kevin Lankinen is back on the shelf seemingly as quickly as he returned. The Chicago Blackhawks placed the backup goalie on injured reserve Sunday with a right hand injury a day after he made 40 saves during a 4-3 overtime road loss to the Minnesota Wild. Lankinen appeared in each of the Hawks’ last two games, his first action since returning from COVID-19 protocols. Before that, his last ...
NHL・21 HOURS AGO
Sportsnaut

The Colorado Avalanche are rolling, winning six straight and 15 in a row at home, but it hasn’t been a
19 HOURS AGO
Sportsnaut

As the Philadelphia Flyers sit near the bottom of the NHL standings, captain Claude Giroux is one of the hottest
NHL・2 DAYS AGO
News 12

Alex Iafallo, Viktor Arvidsson and Carl Grundstrom scored to lift the visiting Los Angeles Kings to a 3-2 win over
NHL・16 HOURS AGO
FingerLakes1.com

The Buffalo Sabres have reassigned forward Brett Murray to the Rochester Americans, the team announced Monday. Murray has six points (2+4) in 19 NHL games this season. With Rochester, he has seven points (6+1) in 11 games. Buffalo’s next game is Tuesday night in Ottawa against the Senators. The Amerks...
NHL・11 MINUTES AGO

Justin Faulk had a goal and an assist and the St. Louis Blues beat the undermanned Vancouver Canucks 3-1
NHL・11 HOURS AGO
USA TODAY

P.K. Subban said he felt accountability to call out recent racist actions in hockey because he has established a platform to inspire better behavior.
NHL・2 HOURS AGO
Sportsnaut

The Pittsburgh Penguins are proving that it’s never wise to count them out. Not in games. Not in the chase
NHL・1 HOUR AGO
San Diego Union-Tribune

David Quinn is getting a second chance at the Olympics as the coach of the U.S. men's hockey team
HOCKEY・29 MINUTES AGO

After a disappointing eight-game homestand that saw them win just three times, the Vegas Golden Knights begin arguably their most
NHL・23 HOURS AGO
Sportsnaut

Nearly two years ago, Chris Kreider was a candidate to be traded before eventually signing a seven-year contract extension. Now
NHL・11 HOURS AGO