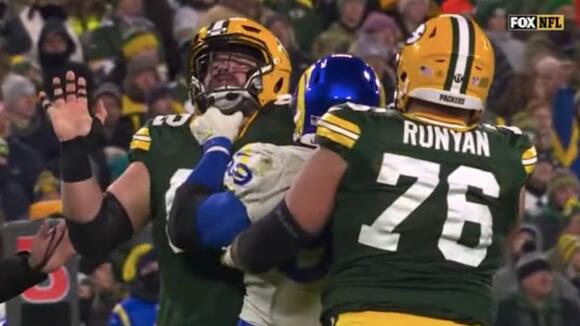 The Los Angeles Rams are having a rough time against the Green Bay Packers Sunday afternoon. Apparently that frustration boiled over with star defensive lineman Aaron Donald, who at one point was caught on camera choking Packers offensive lineman Lucas Patrick.

Here's video of the incident:

Having anyone grab your Adam's apple would be awful, having Aaron Donald do it is 10,000 times worse. This was after the whistle had been blown, so it wasn't incidental contact during a play. There's a decent chance Donald hears from the NFL this week in the form of a fine.

The Rams entered this week 7-3 and the Packers are 8-3. So a loss in Green Bay wouldn't be a disaster, but LA was clearly getting frustrated throughout the afternoon. Donald just epitomized that with the choking incident.

There were some sketchy no calls towards the end of the game and the NFL must hold the Refs accountable for it. Was a damn good hard fought game with a nut ref crew..GO PACK GO

Where was the flag for that disgusting act?

Picks and Predictions for Every NFL Playoff Game, Including Super Bowl LVI

An unprecedented 17-game season, injuries and pandemic combining to create a great uncertainty week to week, and a seemingly random shuffle of top-tier teams created an NFL season unlike any other. The league, in its infinite wisdom, has graced us with two additional playoff games to enjoy and a greater look at chaos. All of this makes looking into a cloudy crystal ball especially difficult. Even so, we are contractually bound to predict how the postseason will shake out.
NFL・4 DAYS AGO
The Big Lead

The Los Angeles Rams got off to a quick start and never looked back on Monday evening, hosting the Arizona Cardinals in their Wild Card playoff matchup. The Cardinals looked extremely unprepared for the bright lights of postseason football and the Rams quickly took care of business, going up three touchdowns in the first half without giving up a single point.
NFL・1 DAY AGO
The Big Lead

The Dallas Cowboys lost to the San Francisco 49ers in the dumbest way possible Sunday afternoon. The Cowboys were on a late drive in an attempt to steal a last-second win in the Wild Card round, made a terrible play-call, then had an official cost them precious time as they tried to stop the clock. It was freaking wild.
NFL・2 DAYS AGO
FanSided

Will Aaron Donald get suspended for Buccaneers game over Wild Card punch?

For the fourth time in roughly a decade, the San Francisco 49ers and Green Bay Packers will do battle in
NFL・1 DAY AGO
USA TODAY

Peyton Manning suffered a cringy hot mic moment on ESPN’s "ManningCast" during NFC wild-card playoff game between the Los Angeles Rams and Arizona Cardinals on Monday night. Following Matthew Stafford’s touchdown pass to Odell Beckham Jr. in the first quarter for the Rams to take the early lead, Eli Manning tossed it to Peyton to break down the touchdown, but unfortunately, the Hall of Famer couldn’t hear anything and had a slip-up.
NFL・1 DAY AGO
Sporting News

For the second time in the 2021 NFL season, cameras have caught Rams All-Pro defensive lineman Aaron Donald attempting to choke an opposing player. The latest such instance came in the "Monday Night Football" playoff game between the 4-seed Rams and 5-seed Cardinals, a game in which Los Angeles thoroughly dominated Arizona in a 34-11 victory. The Rams' margin of victory, however, did not dissuade Donald from getting into it with seventh-year offensive lineman D.J. Humphries.
NFL・1 DAY AGO

Von Miller and Demaryius Thomas were teammates with the Denver Broncos for the better part of eight seasons. Thomas found
NFL・1 DAY AGO
Sportsnaut

As the games tick away on Wild Card weekend, we're getting a better idea of how the rest of the playoff picture is shaping up and NFL Divisional Round odds are on the board.
NFL・2 DAYS AGO
Sportsnaut

Watt active for Cards, Weddle in for Rams in playoff meeting

For the third time this season, the Arizona Cardinals and Los Angeles Rams will meet, as they are set to face off in the NFC wild-card round. For Rams defensive tackle Aaron Donald, he well sees that Cardinals quarterback Kyler Murray will be among the pivotal X-factors in this NFC West clash due to one notable reason.
NFL・2 DAYS AGO
Sportsnaut

Monday night's NFL game between the Los Angeles Rams and the Arizona Cardinals ended with the Rams' hope for a Super Bowl appearance alive.
NFL・1 DAY AGO
Sportsnaut

Arizona Cardinals defensive lineman JJ Watt is returning to the field on Monday Night Football. But before he faces the
NFL・2 DAYS AGO
Sportsnaut