Fauci hit by Cruz missile in war of words over 'science' 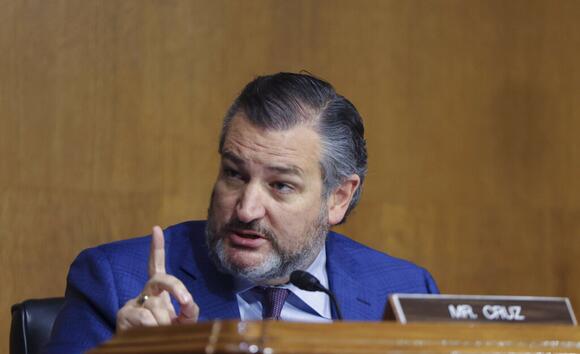 Sen. Ted Cruz fired back at Dr. Anthony Fauci in a cocktail of words mixing science, politics, and COVID-19.

The Texas Republican sent a sharply worded tweet thread in response to Fauci, President Joe Biden's chief medical adviser, who condemned GOP senators for "dangerous" rhetoric aimed at him and, by extension, science.

"Fauci is an unelected technocrat who has distorted science and facts in order to exercise authoritarian control over millions of Americans," Cruz said Sunday evening. "He lives in a liberal world where his smug 'I REPRESENT science' attitude is praised."

Fauci made headlines earlier in the day during an interview on CBS News's Face the Nation in which he criticized the "noise" from Republicans including Cruz and Sen. Rand Paul, who have accused him of lying about funding gain-of-function research. In making his case, he equated science to himself.

FAUCI RIPS CRUZ OVER JAN. 6 WHEN ASKED ABOUT DOJ PROSECUTIONS

"They're really criticizing science, because I represent science. That's dangerous. To me, that's more dangerous than the slings and the arrows that get thrown at me. And if you damage science, you are doing something very detrimental to society long after I leave," he said.

Moments earlier in the interview, Fauci, who is the director of the National Institute of Allergy and Infectious Diseases, quipped about the Capitol riot on Jan. 6 when asked about Cruz, one of several GOP lawmakers who has attacked him.

"Yeah. I have to laugh at that. I should be prosecuted? What happened on Jan. 6, senator?" Fauci said.

Cruz was one of the GOP senators who committed to challenging the results of the 2020 election in the lead-up to Jan. 6. Although the riot disrupted the process of counting the electoral votes, President Joe Biden's victory was soon affirmed.

Cruz is also one of the Republican lawmakers who has accused Fauci of lying to Congress about funding gain-of-function research at a lab in Wuhan, China, where COVID-19 cases were first reported in 2019.

The NIH said last month that one particular group under scrutiny, EcoHealth Alliance, violated grant rules in failing to report research findings on mice becoming sicker when infected by a certain bat coronavirus. The nonprofit group contends it did meet reporting requirements.

Gain-of-function research is defined by the Department of Health and Human Services as research “that improves the ability of a pathogen to cause disease" to "enable assessment of the pandemic potential of emerging infectious agents." It warns these studies “may entail biosafety and biosecurity risks.”

In his tweet thread, Cruz presented a timeline of what was said and insisted that Fauci is in the wrong.

"No amount of ad hominem insults parroting Democrat talking points will get Fauci out of this contradiction," Cruz said. "Fauci either needs to address the substance — in detail, with specific factual corroboration — or DOJ should consider prosecuting him for making false statements to Congress."

Paul, a Kentucky Republican, has clashed with Fauci multiple times during hearings and even referred him to the Justice Department for prosecution, accusing President Joe Biden's chief medical adviser of lying to Congress.

He also took shots at Fauci over his word choice in the CBS interview.

"The absolute hubris of someone claiming THEY represent science. It’s astounding and alarming that a public health bureaucrat would even think to claim such a thing, especially one who has worked so hard to ignore the science of natural immunity," Paul tweeted Sunday.

The Centers for Disease Control and Prevention urge people to get vaccinated against COVID-19, including those who have recovered from the virus and built up natural immunity against it, though questions remain, including how long the protection lasts.

Still, Republicans have piled on Fauci, such as when in September he did not have a "firm answer" when asked if natural immunity offered better protection from COVID-19 than the vaccine.

Cruz is just a scaredy-cat that’ll push women and children aside while running out of a burning building! That’s his legacy: Run when there’s trouble!

Amazing how people think they have the knowledge to argue and discuss something as this virus with someone who has all of this education and experience when someone like Cruz has zero education or degrees in this field.

WASHINGTON — Conservative U.S. Supreme Court justices on Wednesday appeared sympathetic toward Republican Sen. Ted Cruz's challenge to a provision of a major campaign finance law that caps the amount of money political candidates can be reimbursed after an election for personal loans to their own campaign organizations. Cruz,...
CONGRESS & COURTS・8 DAYS AGO
WRBL News 3

Republicans and progressive Democrats alike say they are feeling better about their chances in Texas’s 28th Congressional District as nine-term incumbent Rep. Henry Cuellar (D) grapples with the fallout of an FBI raid on his home last week.
CONGRESS & COURTS・1 DAY AGO
USA TODAY

Speaker Nancy Pelosi, the only woman to lead the House, announces re-election bid

Pelosi's announcement dispels speculation she would not seek another term considering pundits' predictions the GOP is likely to take back the House.
CONGRESS & COURTS・2 DAYS AGO
mediaite.com

Cohosts of The Five discussed Stephen Breyer’s looming retirement and potential replacements President Joe Biden could nominate. On the campaign trail, Biden pledged to nominate the first Black woman to the Supreme Court if elected. He now has that opportunity. Cohost Geraldo Rivera had an interesting take on the...
PRESIDENTIAL ELECTION・1 DAY AGO

One of the Republican Party’s most controversial top-tier Senate candidates has reported spectacular fundraising returns, further raising his profile even as some worry he could hurt the party’s chances of retaking the upper chamber.Herschel Walker, who is challenging freshman Georgia Senator Raphael Warnock, pulled in some $5.4m in donations over the last quarter of 2021, a sum that vaults him to the very top ranking of Senate fundraisers this cycle.A former NFL player, Mr Walker was endorsed by Donald Trump last October, and since then has attracted the support of many other top Republicans, including Mitch McConnell and other...
PRESIDENTIAL ELECTION・1 DAY AGO
The Guardian

Supreme Court Justice Stephen Breyer’s impending retirement gives PresidentJoe Biden one of the most prized opportunities any president has: a chance to nominate a Supreme Court justice who will likely serve long after he has left the White House.But given that Democrats have only a 50-seat majority with Vice President Kamala Harris as the tiebreaker, many of them are probably already dreading how conservative Democratic Sens Joe Manchin of West Virginia and Kyrsten Sinema of Arizona would vote.Democrats especially can’t be too optimistic after Mr Manchin effectively killed Mr Biden’s proposed Build Back Better bill, while Ms Sinema opposed...
PRESIDENTIAL ELECTION・1 DAY AGO
USA TODAY

United States needs Defending Ukraine Sovereignty Act. Triggered measures must be put in place to signal the concrete costs before a Russian invasion.
MILITARY・1 DAY AGO

While criticizing the confirmation of Dr. Joseph Ladapo as Florida's next Surgeon General, CNN’s Anderson Cooper admitted that Ladapo is correct when it comes to the long-term efficacy of COVID-19 vaccines. During Wednesday’s confirmation hearing, Ladapo was grilled repeatedly on the effectiveness of COVID-19 vaccines by State Senator Lauren...
FLORIDA STATE・10 HOURS AGO
The Independent

Sen Lindsey Graham has gone full circle in less than a year and is now one of the staunchest supporters of ex-President Donald Trump seeking a second White House term in 2024, he told Fox News Radio on Monday.The South Carolina Republican who famously declared “count me out” in the hours after the Capitol riot, when Mr Trump’s supporters attacked Congress and attempted to stop the 2020 election from being certified, has returned to his position within the inner circle of Trump acolytes and was once again on the golf course with the former president over the weekend.He told...
U.S. POLITICS・1 DAY AGO
Arizona Mirror

Registering people to vote in rural areas and in tribal nations takes work. During a pandemic, the effort was monumental. During the 2020 elections, Tara Benally and other folks with Rural Utah Project put in hundreds of hours talking to people one by one about how and why it’s important to register to vote. Through […] The post Indigenous voters betrayed by Sinema’s actions in Congress, officials and advocates say appeared first on Arizona Mirror.
ARIZONA STATE・1 DAY AGO
The Guardian

President urged to make good on promise to pick Black woman to fill vacancy, with Stephen Breyer to retire as justice – follow the latest
PRESIDENTIAL ELECTION・1 DAY AGO

CNN's Jim Acosta: I still have 'marks on my back' from standing up to Trump

CNN host Jim Acosta appeared to compare the derision he endured at the hands of former President Donald Trump to being physically abused on Monday. During Monday's handover between his fill-in hosting gig and "Don Lemon Tonight," Acosta said he still had "marks on my back" from his tenure at the White House, seemingly referring to the tumultuous relationship he had with Trump, as well as the criticism he often received from the latter.
POTUS・2 DAYS AGO
Markets Insider

It's been 8 months since the Education Department wrote a memo on Biden's legal ability to cancel student debt. Democrats say it's time to release it.
U.S. POLITICS・1 DAY AGO
People

Supreme Court Justice Sonia Sotomayor is speaking out amid reports of mask-related tension between herself and fellow Justice Neil Gorsuch. While appearing virtually on Tamron Hall's eponymous show Wednesday, the host asked Sotomayor, 67, about the "rare statement" she and Gorsuch, 54, released last week, denying that she had asked him to wear a face mask, amid her own ongoing decision to do so.
CONGRESS & COURTS・22 HOURS AGO
ABC15 Arizona

"Fraud is fraud, no matter who commits it or what party they prefer,” said Chris Hartline, a spokesperson for the NRSC.
TALLAHASSEE, FL・2 DAYS AGO
VTDigger

With Breyer retiring, Vermont politicians call for change in the nation’s highest court

More than any other senator, Jeff Merkley has frayed the fabric of the chamber’s vaunted 60-vote threshold. And he doesn’t mind if that’s used against his own party in the future.
WASHINGTON, DC・1 DAY AGO
TIME

Ahmad Naeem Wakili lives in a daze, his mind often drifting to his wife and 2-year-old, a little girl with big brown curls and green eyes. Wakili escaped Afghanistan amid a flurry of evacuations that began in mid-August after the Afghan government collapsed and the Taliban took Kabul. He now lives and works in Tucson, Ariz., but his wife and daughter remain trapped in Turkey. The U.S. government has twice rejected their applications to be reunited with Wakili through an ad-hoc channel called humanitarian parole. While the rejection documents cite a problem with the fees that Wakili attempted to pay—a total of $1,150— U.S. Citizenship and Immigration Services (USCIS), the government agency in charge of processing such applications, provided no further explanation and no clear indication of when he might see his family again. (TIME reviewed the rejection letters sent to Wakili).
IMMIGRATION・1 DAY AGO