DENVER (CBS4) — Denver Broncos quarterback Teddy Bridgewater suffered a lower leg injury in the first quarter of the game against the Los Angeles Chargers, forcing Drew Lock to fill in until midway through the third quarter. 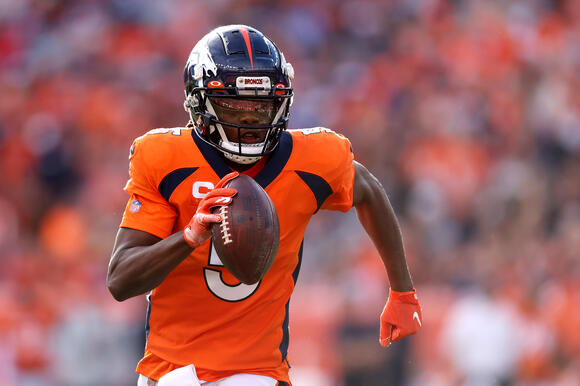 Teddy Bridgewater #5 of the Denver Broncos carries the ball for a touchdown in the first quarter of the game against the Los Angeles Chargers at Empower Field At Mile High on November 28, 2021 in Denver, Colorado. (credit: Matthew Stockman/Getty Images)

Bridgewater ran in a touch down in the first quarter, scoring the first points of the game.

His right leg was hurt a little later in the first quarter. He was 6 and 10 for 59 yards before the injury. Drew Lock #3 of the Denver Broncos throws the ball down the field in the first half of the game against the Los Angeles Chargers at Empower Field At Mile High on November 28, 2021 in Denver, Colorado. (credit: Justin Edmonds/Getty Images)

“Teddy Bridgewater (lower leg) is QUESTIONABLE to return,” the Broncos tweeted at 2:50 p.m.

The Broncos suffered several injuries in the first half, including Calvin Anderson (knee), Dalton Risner (back) and Melvin Gordon (hip.) All three were listed as questionable to return.

The Broncos led the Chargers 14-7 at half time.

Bridgewater returned with about seven minutes left in the third quarter.

“Bridgewater back in the game,” Spencer tweeted . “Not the first time this season that we’ve seen the Broncos prefer a less than 100% Bridgewater over Drew Lock.”

With the 2021 NFL season coming to an end, Black Monday is on the rise. The Dallas Cowboys are headed to the postseason in Year 2 under Mike McCarthy, but other teams could be looking to head in a new direction. Who else is on the hot seat? Who will...
NFL・16 HOURS AGO
Sportsnaut

Davante Adams is the top NFL free agent in 2022 and the Green Bay Packers are at a crossroads. If
NFL・18 HOURS AGO
USA TODAY

The Chiefs' thrilling overtime win against the Bills on Sunday earned the label of instant classic, but was it the greatest NFL playoff game ever?
NFL・8 MINUTES AGO

The Tampa Bay Buccaneers have cut a veteran running back to open up a roster spot ahead of Sunday’s Divisional Round game. The Bucs advanced to the Divisional Round this weekend by beating the Eagles last Sunday afternoon. Now, they have a date with the Los Angeles Rams, who may have had the most dominant playoff performance of the Wild Card round.
NFL・2 DAYS AGO
The Spun

The Kansas City Chiefs beat the Buffalo Bills, 42-36, in overtime at Arrowhead Stadium on Sunday evening. The game was a wild one, with several lead changes in the game’s final two minutes. Ultimately, the Chiefs were able to force overtime, before scoring the game-winning touchdown on a pass from Patrick Mahomes to Travis Kelce.
NFL・1 DAY AGO
Audacy

Sean Payton has reportedly not yet committed to returning to the Saints next season while Troy Aikman could be leaving FOX for Amazon, leaving an opening that could put the Saints coach in the booth.
NFL・1 DAY AGO
The Spun

Josh Allen and Patrick Mahomes will square off for the second straight postseason, as the Bills and Chiefs are set to kickoff this Sunday night. Last year, the Chiefs defeated the Bills in the AFC Championship. Mahomes had 325 passing yards and three touchdowns in that game. The Bills avenged...
NFL・2 DAYS AGO

Having Sunday Night Football in the early afternoon may feel unfamiliar to most NFL fans. But one familiar thing is Cris Collinsworth and his color commentary that they all seem to despise. Collinsworth and Al Michaels have the call for today’s big Rams-Bucs game in the Divisional Round. The winner...
NFL・1 DAY AGO
SaintsNewsNetwork

Drew Brees gives some thoughts on NFL rules that should be modified for next season.
NFL・18 HOURS AGO
The Spun

On Friday night, five-star quarterback recruit Arch Manning had the best college football coach in the country – and his top assistants – at his high school basketball game. Manning, the No. 1 quarterback recruit in the 2023 class, is also a star on the hardwood. Alabama coach...
COLLEGE SPORTS・2 DAYS AGO

Never mind the special teams blowing the game, a predictable outcome for anyone who watched a single minute of Green Bay Packers football this year. Set aside the solid defensive performance from a unit that didn’t give up a single offensive touchdown to the San Francisco 49ers on Saturday night. Ignore the fact that Mo Drayton only fielded 10 players against what would be the game-winning field goal. Disregard the stellar receiving performances from Davante Adams and Aaron Jones, the only players besides Dominique Dafney with more than one target. (Dafney had two.)
NFL・17 HOURS AGO
Sportsnaut

NFL picks against the spread. NFL Championship Sunday edition. And then there were four. With three road teams winning on
NFL・1 DAY AGO
The Spun

With Ben Roethlisberger retiring, there are a lot of eyes on the Pittsburgh Steelers‘ remaining QB room – specifically on Dwayne Haskins. According to ESPN’s Jeremy Fowler, Haskins is going to be getting another shot in 2022. On Sunday he reported that the Steelers plan to place a restricted free agent tender on him.
NFL・1 DAY AGO
The Spun

Antonio Brown just can’t seem to help himself. After posting an image to his Twitter trolling the Buccaneers following their playoff loss, AB had a little smoke left for his former head coach. “Barbarian!” Brown said of Bruce Arians. Retweeting a meme saying that the wideout was “lowkey right...
NFL・17 HOURS AGO
Sportsnaut

Dallas Cowboys might end up replacing Mike McCarthy after all