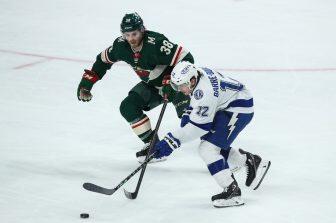 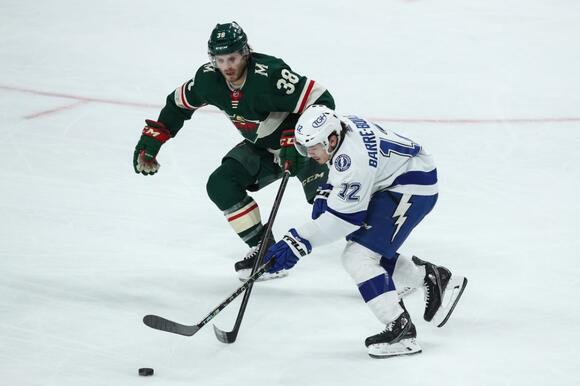 Ryan Hartman scored the go-ahead goal midway through the third period to lift the Minnesota Wild to a 4-2 win over the visiting Tampa Bay Lightning on Sunday afternoon in Saint Paul, Minn.

Nick Bjugstad and Victor Rask also scored for Minnesota, which won its third game in a row. Marcus Foligno added an empty-net goal in the final minute.

Corey Perry and Alex Killorn each scored for Tampa Bay, whose three-game winning streak came to an end.

Lightning goaltender Andrei Vasilevskiy turned aside 33 of 36 shots but dropped to 10-4-3.

Hartman scored the decisive goal for the Wild with 10:45 remaining in the third period. He took a pass from Kirill Kaprizov and finished off a spin move with a wrist shot that beat Vasilevskiy for his team-leading 12th goal.

The sequence gave Hartman five goals in his past six games and 12 points (eight goals, four assists) in his past 12 contests.

Minnesota opened the scoring at 11:03 of the first period. Bjugstad skated in from the right circle and lifted a shot over Vasilevskiy’s left shoulder for his third goal.

Forty-eight seconds later, Tampa Bay pulled even at 1-1. Pierre-Edouard Bellemare zipped a pass to Perry, who settled the puck and fired a wrist shot past Talbot for his second goal.

Minnesota regained a 2-1 lead with 3:32 remaining in the first period. Rask notched his third goal after he got the puck in front of the net and snapped a rising shot just under the crossbar.

Tampa Bay scored the lone goal of the second period to force a 2-2 tie. After the Lightning won a faceoff in their offensive zone, Killorn patiently carried the puck from the right circle to the left circle before releasing a wrist shot for his eighth goal.

Wild forward Mats Zuccarello did not play because of an upper-body injury.

The Tampa Bay Lightning have reassigned forwards Daniel Walcott and Charles Hudon, as well as defenseman Andrej Sustr to the Syracuse Crunch, the team announced Monday. Walcott, 27, has not appeared in a game with the Lightning this season. With Syracuse, he has five points (2+5) in 19 games. Hudon,...
NHL・2 DAYS AGO
Sportsnaut

With only eight games remaining between Thursday and the end of February, the Tampa Bay Lightning will look to get
NHL・19 HOURS AGO
Sportsnaut

The NHL season officially started back on October 12. In this article, we track all the NHL games today as
NFL・3 HOURS AGO

This past week, the Boston Bruins honored Willie O’Ree by retiring his No. 22 and lifting it high into the TD Garden rafters. But that is not enough. O’Ree was The post Minton: The NHL needs to retire Bruins legend Willie O’Ree’s number appeared first on Itemlive.
NHL・2 DAYS AGO
USA TODAY

Now that the 2021-22 season is about half of the way through, and Covid is ravaging many clubs, it’s time
NHL・1 DAY AGO
San Diego Union-Tribune

Ryan Pulock has now missed 22 games and counting with a lower body injury, but if there’s a silver lining to his absence, Peter Schwartz writes that it’s the emergence of Robin Salo and Noah Dobson.
NHL・2 DAYS AGO
93.7 The Fan

It’s the worst team in the Western Conference & even though they’ve played better of late, can the Pens keep their focus tonight against Phil Kessel and mates
NHL・1 DAY AGO
Sportsnaut

David Quinn is getting a second chance at the Olympics as the coach of the U.S. men's hockey team
HOCKEY・2 DAYS AGO

The Pittsburgh Penguins are proving that it’s never wise to count them out. Not in games. Not in the chase
NHL・2 DAYS AGO
93.7 The Fan

you can’t beat them, join them! And by “join them” we mean take all of their players. On their current roster, the Washington Capitals carry four former Pittsburgh Penguins.
NHL・14 HOURS AGO
San Diego Union-Tribune

Matthew Tkachuk had a career-high five assists, Johnny Gaudreau had a goal and three assists, and the Calgary Flames routed the St. Louis Blues 7-1
NHL・2 DAYS AGO
Sportsnaut

The Colorado Avalanche beat the Chicago Blackhawks 2-0 on Monday night to extend their franchise-record home winning streak to 16 games.
NHL・2 DAYS AGO
Sportsnaut

Zach Parise recently assured his New York Islanders teammates he’s a second-half player. He might not be the only one.
NHL・18 HOURS AGO
San Diego Union-Tribune

Connor McDavid scored with 23.4 seconds left in overtime, powering the Edmonton Oilers to a 3-2 comeback win over the Vancouver Canucks on Tuesday night
NHL・1 DAY AGO
Sportsnaut

While the Edmonton Oilers always would prefer the security that comes from an early lead, falling behind will not deter
NHL・16 HOURS AGO